JNU and the Price of Sedition

The dangers of making seditionists out of comic-strip revolutionaries 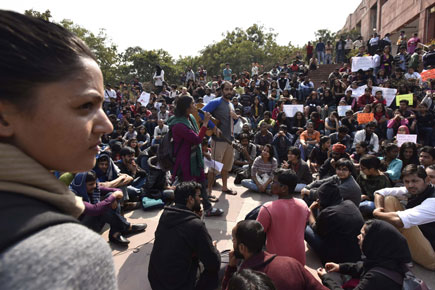 In JNU, there was no surge of sedition. There was the fear of sedition, which, predictably, snowballed into another image crisis for those who wanted to save India from the so-called enemies of the nation.

In JNU, there was something else, the comic strip revolution. It also says something about the romance of living outside history, outside argument. It has shown the extent to which a generation, desperate for causes and icons, will go scavenging in the junkyard of slogans. Heroes and martyrs are hard to come by nowadays. I mean a particular kind of heroes and martyrs. Their immortality is preserved in formaldehyde, or in souvenir shops.

Then it was different. ‘Bliss it was in that dawn to be alive’ on the campus of India’s premier university, ‘but to be young was very heaven!’ Elsewhere, the project of heaven-on-earth was in full swing, and the man reborn in revolution was an idea that inspired those who were mastering their class struggle on the sprawl of the JNU campus. It was a time when to be haunted by the distant spectre of communism was pure joy, and to build your own little Soviets in the hugely subsidised hostel rooms was a rejoinder to capitalism. It was very heaven to be alive in a south Delhi make-believe. Made-in-JNU apparatchiks would go on to become revolution’s last bookworms, condemned to live on borrowed slogans, in dreamed-up empires.

Revolution has come a long way, say, from Che to Afzal Guru. The distance speaks of the evolutionary tale of dissent, of its cultural content. In the world beyond JNU, the romance of the millennials is not sustained by the sepia images of ideological heroes; the iconography that drives them is spread across the marketplace. They may still be swayed by the social welfarism of a Bernie Sanders, but they are not strictly anti-capitalist. The millennials, shaped by the politics of wealth and the possibilities of freedom, may want a semblance of fairness in the system, but they are not reading Marx. The revolutionaries among them, too, are empire builders, and, like their predecessors, they want to change the world. The new revolutionary does not disembark at Finland Station but somewhere in San Francisco Bay Area.

At JNU, what is on display is not even retro-heroism; it is the shrinking intellectual size of protest—and the vulgarity of making icons from the wretchedness that is India. There is little virtue in parading hatred as dissent, and reducing India to a series of slogans that test the generosity of a democracy. Sub-rural thugs, preachers of terror, and other sundry ‘freedom fighters’ in ‘the land without justice’ are at home in the mind of the new campus rebel. This misplaced theatre of dissent is a celebration of its own backwardness—in terms of ideas and attitudes. And it stands out, in spite of its irrelevance, because Delhi is not Paris, or not even Seoul; the campus has not been part of the Indian political story of change. The backwardness is academic too. JNU, or for that matter any other Indian university, does not figure anywhere on the long list of the global best. The protestors buy heroism cheap here.

Still, there is nothing seditionist about it. If someone wants to be a worshipper of Afzal Guru, so be it. If someone wants to be a cheerleader of Pakistan, so be it. Not just fools, fantasists, idiots and jesters, even professional purveyors of hatred should be given the space they deserve in a democracy. Sedition as a weapon suits only those who think their nation is so fragile that it will collapse under the weight of a few silly slogans manufactured in JNU. It is again the case of the wrong people feeling empowered by the election of Narendra Modi, whose India I do not think is as endangered as it is made out to be by some of his admirers. A section of the cultural Right manufactures weapons of nationalist mobilisation with the same ease with which the Left, including the JNU prototypes, invents causes of persecution. In the end, Modi, who is working hard to be a moderniser and an internationalist, himself becomes a victim of it. It was the sacred cow before. It is sedition now.

That is the price you pay when you make seditionists out of desperados abandoned by history and trapped in a place immune to ideas but kept alive by the rotten debris of ideology.