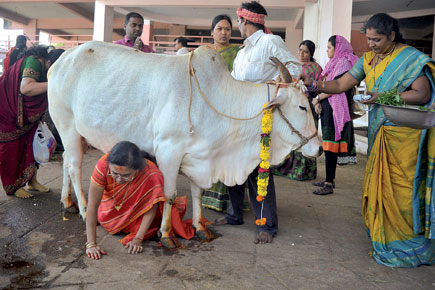 Anthropologists have always been fascinated by the relations between man and beast. Man and cattle have existed in solidarity whether it is the Nuer in Africa or Jains in Gujarat. The Jain institution of the pinjrapol is a fascinating one. In times of drought, flood or epidemic, the owner can leave his flock at a local pinjrapol and his animals are taken care of. The political scientist Chandrika Parmar tells a poignant story of a man who could not leave his cow behind during a Gujarat drought. He left it for a day and found he was missing it so badly that man and cattle jumped into a well and committed suicide.

Animal and animal parts, as also styles of cooking, have been always used as forms of classification through totemic affiliation. One knows which animal one can eat and which is taboo. It is around animals and food that one can build an entire cosmology where the animal world serves as a model of the social world. Between the raw and the cooked, between feasting and fasting, food classification has gone a long way in ordering society. Animal and food play symbolic roles even as a society moves away from nature. American baseball teams are often named after bruins, tigers, bears or raccoons, creating a whole range of symbolic affiliations that survive in urban society.

Food thus becomes central to a society in its manner of classification and discourse and has a way of conceptualising relationships. Who you eat with or who you marry can determine the basic rules of caste or affiliation. Food has a symbolic value and a social one, therefore taking it literally can be stupid. When Justice Markandey Katju claimed that the cow is just like any other animal, it cannot be anyone’s ‘mother’, he was being both literal and illiterate in denying the symbolic implication of the cow for what was once an entirely agricultural society. A cow stands for nurturance and fertility, and thus becomes sacred. A sacred cow is literally a metaphor contending it is beyond touch, let alone consumption.

Food classification haunts modern India. The opposition between vegetarian and non-vegetarian becomes an axis of conflict between religious groups. Hindu landlords often won’t rent houses to Muslims because they are non- vegetarian. Meat, in that sense, not only becomes an axis of differentiation but a way of creating distance.

The classificatory discourse takes place in terms of food. Pork, as it comes from pigs, is taboo for Muslims. Mutton, as goat meat, is merely non-vegetarian, while beef, even if it’s buffalo meat, is taboo for Hindus. Chicken and fish constitute softer parts of the classification, and in Bengal fish on various occasions is classified as vegetarian for widows. It is around classification and the rules of purity and pollution that the politics of social life is played out.

Gopal Guru, the political scientist, once told me about a Tata Institute of Social Sciences survey where students had come to study communication and poverty. They went to a Muslim mohalla where pigs were running around. When one of the pigs kissed a social scientist in the face, the whole group fled. Guru, a Dalit activist, cited it as an illustration of how even social science expertise does little to hide the biases created by food classifications and taboos.

The recent debate about beef and banning it has to be seen in this context. For Hindus, the cow is central. It is sacred, totemic of an agricultural society. The cow as totem is uneatable. One can consume milk, use its dung, but the sacredness of a cow prevents any form of slaughter. For Jains and Hindus, it is a central belief.

A politics of aggressive Hinduism is built on the food axis. Food thus becomes not a mere object of consumption but food for thought, creating identity and identity politics. There is a Brahminical touch to this Hinduism that downplays Dalits and Muslims. The index is the process of Sanskritisation, where a lower caste adopts the rituals of a higher caste. Food habits, especially vegetarianism, become a new form of exclusion. The sacred cow, a symbol of non- violence, now becomes an axis of exclusion. Vegetarianism becomes a majoritarian dream as it excludes and marginalises lower castes, Muslims and the poor.

The politics of exclusion is played around the sacred cow. One does not play the dialectic of taboo and totemism, but the politics of bans. Bans are not rituals of Sanskritisation, but attempts to threaten livelihoods. The first attempts at such bans were the BJP’s attempt to ban abattoirs and meat consumption during Hindu festivals. Beef becomes a code for suspicion and coercion, as a man suspected of its consumption gets lynched. One realises that it is not the sacred cow that is a problem, but the sacred cow of electoral politics. It is the politician who is the sacred cow. It is he who is immune from the consequences of violence. It is he who is the spoilsport of Indian democracy. The irony is that the sacred cow is blackboxed, its muteness taken for granted, while politics as a Pandora’s box is opened. The other irony is that a food taboo that is supposed to be life-giving becomes an axis for exclusion and murder. That is the sadness of Indian politics, where an aggressive Hinduism destroys the most sacred of Hindu symbols—the cow.

Blaming the cow is unfair. The poor animal is sitting somewhere chewing cud. It is man in his animality who is using food classification to condone murder. Vegetarianism through its politics converts non-violence into bestiality, lynching a man on suspicion of cow slaughter. It is the sacred cow’s politics that threatens democracy. A bestial lynching threatens the poor, the marginal and the minoritarian because one knows that beef is a poor man’s protein. Food helps code the violence of our time where what should be life-giving has become life-threatening. Such is the irony of politics which misuses symbolic classification of food to create a new stratification system where democracy threatens its own citizens. This is the final irony of food as a form of politics. But there is more.

The beefing you hear about cow slaughter is deceptive. Food is a mask for—or a warning signal of—a deeper kind of tyranny. The fetish around the cow hides an insidious classificatory policing. India is the one country where food policing, moral policing and security policing converge to control minorities, the marginalised and dissenters. Soft fascism produces its own fascinating dialects of what tyranny should be. The Dadri lynching is a sign of things to come.