Shame: the Nehru Papers are still inaccessible to most Indian scholars and researchers 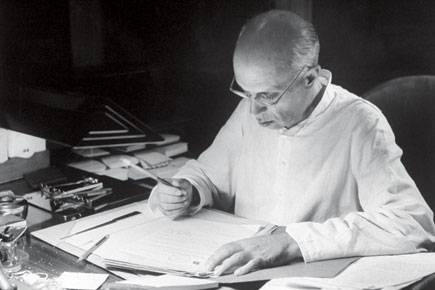 Shame: the Nehru Papers are still inaccessible to most Indian scholars and researchers

No work on modern Indian history can be written without a trip to the Nehru Memorial Museum and Library, housed within the complex of the imposing Teen Murti House, once the official residence of India’s first Prime Minister, Jawaharlal Nehru. Converted into a museum by an order of interim Prime Minister Gulzari Lal Nanda, the library came up in the early 1970s when Nehru’s daughter Indira Gandhi was the Prime Minister, to house one of the most comprehensive collections of private letters, papers, writings and diaries of Nehru and many of his contemporaries.

Over the years, the collection has been expanded to include the private papers of educationists, economists, editors and senior civil servants. But, as the country observes Nehru’s 125th birth anniversary, there is need to revisit and review the issue of restricted access to his private papers.

On the upper floor of the library building, private papers are stored in boxes and cartons in a tubelight-lit hall, the entry to which is guarded by staff who take little time to pull out files for researchers and scholars from shelves with neat stacks of reading material. Requests for the Nehru Papers are met with a stern response, and curious researchers are informed that “written permission is needed” to view those files.

After Nehru’s death in 1964, his daughter Indira Gandhi became the custodian of his papers. This, despite the fact that a Prime Minister’s private papers should belong to the nation and not a private individual or family. Instead, Indira Gandhi, as the donor of those papers, decided to introduce a rule that forbade anyone from looking at these documents without her permission. A rule such as this, classifying certain collections of private papers as ‘restricted’ or ‘closed’, defeats the very purpose of setting up an institution to store them at the expense of taxpayers.

There are some other collections as well in the ‘closed’ category, like the private papers of former diplomat and Indira Gandhi’s principal secretary PN Haksar, who was her chief strategist in her early years as an inexperienced Prime Minister. Haksar’s papers were donated to the Nehru Memorial with a caveat that they could be made public only 30 years after his death. Any researcher keen to look at the Haksar Papers had to write to his daughter and lawyer, Nandita Haksar, for permission to view the files. This stipulation was challenged by constitutional expert AG Noorani, who invoked the Right to Information Act in 2007 to access them; under the law, he argued, all papers in the Nehru Memorial Museum and Library, funded by the Government, should be publicly accessible.

Indira Gandhi willed the Nehru Papers to Congress Vicepresident Rahul Gandhi and her own papers to his sister, Priyanka Gandhi. Royalties from The Selected Works of Jawaharlal Nehru were willed to Varun Gandhi. The Nehru Memorial Museum and Library in turn became the custodian of these papers.

Under the law, every 25 years all government documents have to be made public after declassifying them. Ample safeguards are provided for documents classified under the Official Secrets Act and the Government of the day is expected not to make such articles public. However, successive governments have shied away from making even declassified documents public. Such is the secrecy, that one RTI applicant found out to his shock a few years ago that the rules governing the classification and declassification of official documents was also a secret manual that the Home Ministry refused to share.

In 2012, the Foreign Ministry de- classified 70,000 documents of assorted dates until 1972 and passed them on to the custodian of all government archival material, the National Archives of India. Most other ministries are indifferent to this policy. The PMO and Home Ministry have sat tight on documents of former Prime Ministers.

As the custodian of the Nehru Papers and Indira Gandhi Papers, Congress President Sonia Gandhi controls all access to these documents that hold important information and provide insights into the thought processes and decisions of leaders like Nehru. Unlike the pre-1946 papers that need written permission from the Nehru Memorial Director, papers from 1946 onwards need the written assent of Sonia Gandhi. Insiders say that Mrs Gandhi has been particularly choosy about granting access to these papers, and that the historian Sunil Khilnani, author of The Idea of India, is one of the few who have been lucky enough to has seen those documents.

The historian Ramachandra Guha, on the other hand, ended up writing India after Gandhi without looking into the private papers and documents of Nehru. Contacted, Guha says his efforts to get permission to see the Nehru and Indira Gandhi papers were unsuccessful. According to him, he wrote several times for permission between 2002 and 2007, but his letters were not even acknowledged.

Most democracies around the world regularly declassify official documents. Nehru, the democrat, would be quite ashamed to see how successive governments of India—and his family in particular—have kept a tight control on these documents and papers. Inder Malhotra, veteran journalist and author of Indira Gandhi: A Personal and Political Biography, calls India “the largest democracy that is the worst violator in flouting the 25-year-rule” that obliges the Government to make documents, official papers and letters public after a specific period of time. Malhotra, disallowed from looking at the Nehru and Indira Gandhi’s papers, had to write his biography on the basis of material and information provided by an ageing Haksar.

It is ironic that some of the documents and letters of Nehru that were not made public by the Indian Government have entered the public domain from the UK, where official papers are regularly declassified and put out every 30 years. The Selected Works of Jawaharlal Nehru was published by the Nehru Memorial Fund, which has put out 55 volumes of his letters and papers until 1959 and hopes to do likewise for the period until his death by 2016.

As the name of the project suggests, these are Nehru’s ‘selected’ works and not exhaustive. A few people familiar with the working of the Nehru Memorial say that demands have arisen within the institution that the Nehru Papers be digitised and made available to all. This suggestion, however, has been dismissed.