BJP and the Post-Ayodhya God

On a closer read, the BJP’s manifesto ‘One India, Greater India’ is the party’s most definitive documentation of life after Ayodhya. 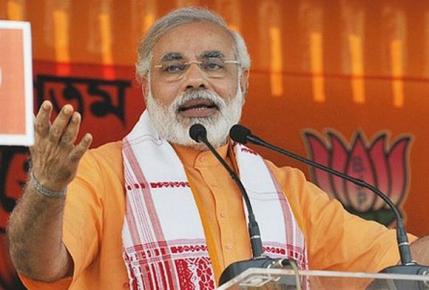 On a closer read, the BJP’s manifesto ‘One India, Greater India’ is the party’s most definitive documentation of life after Ayodhya.

Everything has changed, and in a country where that French expression of minimum expectation—plus cá change, plus c’est la meme chose—remains a political reality, the transformation is all the more stark. Till yesterday, till Narendra Modi made himself an inevitability in the Bleak House of Sangh, the BJP was all about defeatism and disowning its own Rightist space in Indian politics. It was about a profusion of leaders whose ambition was never validated by their influence, even as the party withdrew from the national mind space, despite its regional successes. It was about invoking displaced gods to appease the angry Hindu, not to speak of sulking deities within the house. A decade of powerlessness had made BJP a party in denial. Then Modi happened, not because of the party, but in spite of it. For a man whose entire political career as an administrator was about building his own mythology as a leader larger than what his office demanded, the journey to Delhi—which began more than ten years ago from Ahmedabad—was marked by a series of referendums on the cult of the performer. Today, his argument with India is driven by his own biography as a ruler, and it is the argument of a man passionate about power. Modi has taken complete ownership of ‘change’ with the same ease with which he has made the party his own.

The change is written in the party’s manifesto, which comes with the slogan, ‘One India, Greater India’—no projection of the Leader-Redeemer is complete without a certain amount of pulp nationalism. On a closer read, though, this manifesto is the party’s most definitive documentation of life after Ayodhya. The perfunctory dedication to the cause of the temple is almost an afterthought, and it is a good thing as it comes from a party that is so used to invoking Ram whenever in doubt. The vandalised god may still be powerful imagery for the shirtless legion that constitutes the base. But the deification of Modi as doer extraordinaire has ensured that the erstwhile mascot of masculine Hindutva doesn’t require any further dose of divinity, and particularly so when his performance has Benares as backdrop. He doesn’t have to talk about gods and temples—and he has not throughout this campaign—when the symbolism of Benares does the work for him. He has to talk a lot more about national repairing, about reclaiming the future. This election, unlike the BJP’s chariot race to power in the last century, is not a culture war. And culture wars are hard to win in India of the twenty- first century, which is, demographically, one of the youngest in the world. The aesthetics of Nagpur is incompatible with the cultural attitudes of the younger generation that is swayed by the message of Modi.

This election, as the conventional argument goes, is not about a magical recovery of India’s economy either. No meaningful revival of the economy is possible without structural reforms in governance. The Manmohan Singh decade deepened the structural cracks. The best part of the manifesto provides a structural context to the text of reforms, and that is what India of the moment needs. Take this: ‘Administrative reforms will be a priority for the BJP. Hence we propose to implement through an appropriate body under the PMO. The objective will be to bring in transparency in government’s decision- making process. Government systems and processes would be relooked to make them citizen-friendly, corruption- free and accountable. Every effort will be made to meet the development aspirations of the people and make the government agencies accountable to the citizens… From birth certificate to school admission, from setting up business to paying taxes, our present systems complicate the lives of our own people.’ A touch of AAP here? This is common sense, and that is the minimum requirement any democracy worth its people will expect of a government, and that is exactly what the outgoing UPA regime has failed to deliver. If the Indian economy has stopped growing the way it should, and if crony capitalism has become the only growth story in the regulation raj, there is something horrifyingly wrong with the system. The party that pledges to reform the system first is the party worthy of India now (and AAP cannot be that party because its idea of structural reforms is more hallucinatory than constitutional). Market freedom cannot be sustained by a system that weakens almost every institution of democracy.

That is why change today rhymes with the slogan of responsible governance. Still, Modi’s BJP does not articulate the idea of change from an entirely Rightist perspective, the unnecessary caution on foreign investment in retail being an example. Even as the party’s prime ministerial candidate sells the Indian Dream to converts as well as believers, somehow another image too persists: the BJP as a party of shopkeepers. At last, the party has realised that it cannot win the culture war, and, ironically, this realisation coincides with the ascent of a man who was one of its fiercest culture warriors. It is not bold enough to make the only Rightist argument India ought to win at this moment—the economic argument. Maybe, Modi too believes that the most feasible position of governance today is centrist, no matter where you come from, left or right. His party’s manifesto of governance reveals the mind of a man who thinks his moment has come. The post- Ayodhya BJP needed a different kind of god and Narendra Modi offered himself.