The Gujral Foundation’s decision to present two artists from India and Pakistan in its collateral show at the 56th Venice Biennale this year did seem like a risky proposition. Thankfully, it was the choice of artists that made the difference 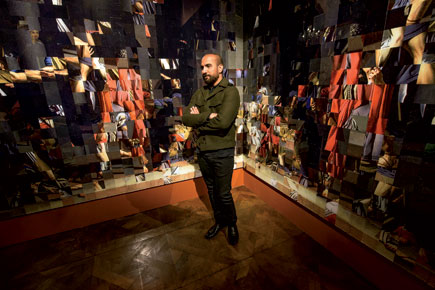 The recent stir caused by Shashi Tharoor’s address at the Oxford Union raked up the dreary old hydra- headed monster of colonial legacy. One of its ugly heads is surely the Partition of the Subcontinent, though the British alone must not be blamed for it. Several decades after the splintering of India and Pakistan, and later of Pakistan and Bangladesh, the political rhetoric among these nations remains inconsistent, wavering between cordiality and hostility. Among their people though, the feelings may be less insincere, and the effect of the tragedy perhaps more intensely felt. Responses to Partition, especially in the visual arts, are ubiquitous, though much of these tend to be disingenuous— riddled with cliché and tired sentiments. Seen in this context, the Gujral Foundation’s decision to present two artists from India and Pakistan in its collateral show at the 56th Venice Biennale this year did seem like a risky proposition. (As an aside, it begs to be pointed out that neither India nor Pakistan has a permanent national platform at the biennale, in spite of some of the countries’ major artists having participated in it.)

The idea proposed by the curator Natasha Ginwala harked back to the fragility of nation-states and imagined communities, both of which were likely to yield mind-numbing results if not graced by pure genius. Thankfully, it was the choice of artists—Shilpa Gupta from India and Rashid Rana from Pakistan—that made the difference. It would have been easy to turn the exhibition, ‘My East if Your West’, into yet another graphic display of turgid postcolonial theories, where, visually, the art makes little sense unless upstaged by weighty concept notes. Instead, the viewers witnessed, and felt, the pulse of a magical world in which the familiar and the foreign are harmoniously confused.

The Mumbai-based Gupta has long been on the cutting- edge of contemporary Indian art, drawing on the language of the European avant-garde and mixing it with a flavour of a closer-home reality to articulate simple but wrenching truths. With her emphatic use of words and animated light installations, she echoes the style of artists like Jenny Holzer and Tracey Emin, though her statements are less autobiographical, much more elliptical and, almost always, sharply polemical. In 2007, Gupta created a site-specific installation at the Chemould art gallery in Mumbai called There is No Explosive in This—a somewhat sensational title given to a set of innocuous-looking bags wrapped in white cloth. Another striking work, a light installation, had the script, ‘I live under your sky too’, hanging on a clothesline- like structure on a Mumbai beach. Such potency is what Gupta also brings to her offering at the biennale. Although the title of the show is borrowed from one of her light installations, the pièce de résistance is her mediation on the porous border that exists between Bangladesh and India. A performer is seated in a room and asked to sew an endless line on 3,394 metres of hand-made textile, sourced from Phulia, a town on the India-Bangladesh border. A hypnotic appeal begins to grow on the beholder as metaphor becomes real and reality turns into poetry.

Lahore-based Rashid Rana’s work is best summarised in his own words: “I am interested in the negotiation between the actual and the remote,” he says, “The actual is close at hand—something one can experience directly with the body as the site of knowing. The remote, on the other hand, is knowledge amassed indirectly, from diverse sources scattered across time and space such as the internet, books, history of collective knowledge.” The result of such a negotiation, he adds, is a “meditation on location, both in a physical as well as temporal sense”.

Often staggeringly large, Rana’s work may initially deceive, but later overwhelm the viewer. From a distance what looks like a complete image, of something as humdrum as a building, may start revealing itself in minute detail as you move closer and closer to it. Formed out of millions of pixilated fragments of colour, each of which is like a piece of a gigantic jigsaw puzzle and often a completely independent image in itself, the impact of his work is breathtaking. Beyond this ingenuity, of course, lies an intensely cerebral imagination, one that connects the most unexpected dots across time, culture, continents and characters, creating a montage of illusions and realities. Using a number of iconic references from the history of Western art and juxtaposing on them scenes from everyday life in the Subcontinent, Rana simulates in this work a sense of ‘everywhere’. Viewers, too, are filled with an apprehension of being in and out of place at the same time, as they keep moving between worlds that are keenly real and lyrically surreal.

This border-talk cannot end without a mention of a hero of our times: the Chinese artist Ai Weiwei, who has just been handed back his passport by the government of his country after four years.

In Ai’s life, borders haven’t just had a notional significance but manifested themselves in brutal ways. For him, art is the most potent tool of protest against the social injustice suffered by his people at the hands of the political system.

Never hesitant about mixing art and activism, Ai has had several brushes with the law for many years. In 2009, a policeman in Chengdu punched him in the face, after which he needed surgery. In 2011, following the devastating Sichuan earthquake, Ai led a campaign to expose those involved in shoddy construction of school buildings, which collapsed and caused the death of many children. It proved to be the last straw. The Chinese government put him under house arrest and seized his passport. Ai sent his wife and six- year-old son, Ai Lao, away on exile in Berlin, and stayed back in Beijing. He continued to work and exhibit, not only in China but also across the world, closely directing the assembly, transportation and installation of his work via Skype.

Just before his incarceration, Ai had shown Sunflower Seeds, one of his most ambitious and spectacular works, at London’s Tate Modern. The entire turbine hall of the gallery was filled with millions of sunflower seeds, each made of porcelain and carefully hand-painted. Sunflower seeds, widely consumed in China, stood in for the millions of people turned into faceless subjects by the oppressive state machinery, and sent out a powerful message to the world.

In most of Ai’s work, the trick has been to say the most while showing the least. It is not surprising then that there is a cryptic aura to his startling installations, many of which are made of natural substances. The work he is currently making, for instance, is a massive installation out of bits of dead trees that are sold in the city of Jingdezhen as decorative pieces. Ai has been buying and collecting these odds and ends for a while, and his idea now is to put these together to recreate entire trees—if not the originals, at least imagined ones. The Royal Academy is trying to raise funds through crowdsourcing to transport this resurrected arboretum, along with tonnes of steel reinforcing bars that have been twisted and mangled in the Sichuan earthquake, but now manually straightened to whatever degree possible by human hands under Ai’s supervision.

Over the last few years, Ai had continued working and exhibiting within and outside China, mostly with the help of the internet. Earlier this year, he directed a short film, Berlin, I Love You, as a gift for his young son, languishing far away from him. Till recently, he was directing and planning his forthcoming show in the UK through Skype as well, crossing borders virtually even while remaining a prisoner of circumstances. Hopefully, with the purloined document back with him, he will be able to cross borders for real now.