A Letter From Ramallah

When the knife becomes the preferred weapon of angry gods 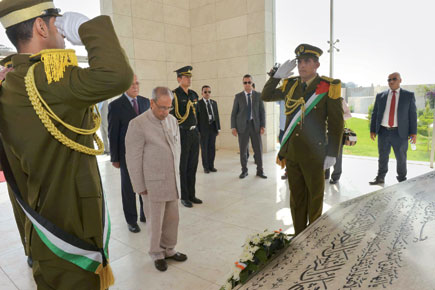 The evening sky I am sure will miss the poet, whose memorial is a stone’s throw away—no allusion to protest here— from where I sit: the poolside of the hotel Mövenpick in Ramallah, the West Bank town which is the administrative headquarters of the Palestinian Authority. In Palestine, these are dangerous times for poets and proselytisers, prophets and propagandists. Still, this poolside tranquility provides an ideal setting for Husam Zomlot, the ambassador at large for the ‘state of Palestine’. He is here tonight to enlighten the Indian journalists accompanying President Pranab Mukherjee, who is on a first-ever visit by an Indian president to Jordan, Palestine and Israel, on the tragedy of the permanently oppressed. He is here armed with videotapes which he believes will add to the dehumanising horrors of occupation.

In Zomlot’s narrative, a breathless blend of sophistry and sentimentalism, the ‘occupation’ of Palestine is still a work in progress, and the latest wave of violence in Jerusalem has only one victim: the Palestinian, who could be a pregnant woman or an innocent teenager. The truth itself, his videotapes show, has been occupied by the Jewish state. (Later, I will read in The Jerusalem Post a story on doctored videotapes by Palestinians manipulating truth, and spreading lies about an impending threat to Muslim holy sites through social media.) It is Zomlot’s job to convince not just visiting Indian journalists but the world that history is a merciless past for Palestinians, and the future a struggle, and his eloquence makes it all the more poignant, as if this breezy poolside serenity is a necessary make-believe in a world where the knife-wielding Palestinian teenager kills an Israeli boy of his age. So far, seven Israelis have been killed, and severalPalestinians, mostly the killers, have been shot down by the Israeli police. Intimations of another intifada? A situation such as this makes the programmed polemics of Zomlot indispensable. The suave propagandist has replaced the poet of protest in Palestine.

For the Indian President, Palestine is special. A few hours ago, he placed a wreath at the mausoleum of Yasser Arafat, whose image as a wandering statesman without a state is unlikely to have vanished from the memory of India, a champion of the Palestine cause since 1947. The previous day in Amman, while speaking at the University of Jordan, he quoted Gandhi: “Palestine belongs to the Arabs in the same sense that England belongs to the English and France to the French.” At Al-Quds University in Ramallah, he will say, with a greater sense of solidarity: “India has always been at the forefront in promoting the Palestinian cause—India voted against the partition of Palestine at the United Nations General Assembly in 1947.” He will find common destiny: “India’s solidarity with the Palestinian people and its principled support to the Palestinian cause is rooted in our own freedom struggle.” It may not be presidential to be distracted by the knife-wielding martyr who has brought fear back to the street, but the martyrdom adds an extra dimension to the words of the Indian visitor. On the Al-Quds campus, protesting students ask the Indian President why he is not condemning the ‘Israeli butchery’. They lambast their own president for caring less for the lives of Palestinians and wasting his time on meaningless ceremonies. Silly students, how could they miss the point made by the Indian President, who has just said that India did not want Israel to be born? Better not to mention who the others were in 1947 voting along with India in what the Israeli writer Amos Oz calls a real estate dispute in history.

The Jerusalem Post too will protest: ‘Indian president ignores terrorism in two public appearances in the PA.’ (It will be pleased when Mukherjee utters the word before his address to the Knesset.) A presidential visit is ceremony and solemnity, not political theatre (which will be provided by Israeli Prime Minister Benjamin Netanyahu in the Knesset, where Modi makes an appearance in his lively ‘nationalist’ speech). Mukherjee has come to a region on the boil, where the passion plays of gods and tyrants have created the biggest humanitarian as well as political crisis since World War II. The so-called Islamic State, where the cult of techno-savvy jihad is sustained by the knife-wielding killer in orange robes, is larger than Jordan. (Suddenly, the knife has become the preferred weapon of angry gods.) And Palestine is more than that familiar victim pitted against the ‘settler-colonialist’. It is not the romance of intifada worthy of Darwish’s poetry any longer. And the mythology of resistance is not symbolised by Arafat’s empty holster or his colourful keffiyeh.

The so-called nationalist struggle of Palestine is being submerged in the larger cause of Islamism, no matter what Zomlot says about Hamas (“It is not an external entity”). If the struggle for Palestine begins to borrow from the Book, there is enough to worry about the state of Palestine, whenever it becomes an independent entity. It should not be Israel’s worry alone. It should be the worry of India too, for we know what it means, in terms of both history and geography.

India, in spite of its renewed relationship with Israel, returns to the redundant platitudes of Cold War vintage whenever it comes to causes such as Palestine. We can go on saying that a ‘dispute’ born out of a UN vote should be resolved in the UN itself. This is a leap of faith, considering the UN’s own irrelevance in a world where territorial wars are increasingly powered by the dead certainties of religion rather than arguments of politics. The truth is that we are out of the swirl of history in the Levant. It took us a decade to catch up with the world after the Berlin Wall, and a section of our foreign policy establishment still sees the world through the Cold War prism. Our response to Syria or other horrors are clerical; they have not entered our foreign policy vision yet, despite Prime Minister Modi’s energetic internationalism.

President Pranab Mukherjee on this trip has collected a few honorary doctorates. The President who has played the wise old statesman from the East to perfection deserves the honour. The lands that unite the holy and the hateful need such visitors—with a new vocabulary of engagement. Then we can do without poolside polemics on media-friendly victimhood.