A Letter From Jerusalem

Israel is a country trapped between mutilated geography and hateful history 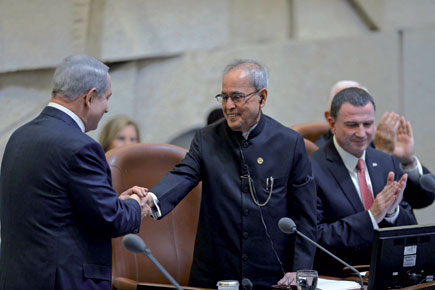 The cobblestone paths of the old city of Jerusalem are having less footfalls this evening, and every gate that otherwise invites the flâneur to the rhythm of community life—of Arabs, Armenians, Christians and Jews—is guarded by more guns. There is fear in the city that is a monumental expanse of the sacred and the sacrificial, of religious conquests and tribal bloodlust, stretching back in time to the Biblical and before. The holy relics of war and worship that mark this city on the hills have only stories of disputes and demolitions to tell. This evening, though, it needs to be protected from the angry Palestinian teenager, most likely an intruder from the segregated ghettos across the walls, hiding the knife—the new weapon of ‘liberation’—in the pocket of his cargo pants, ready to kill and to be killed. Perhaps, the only ones oblivious of the danger lurking in the holy maze are the faithful lighting candles inside the Church of the Holy Sepulchre, or the Christians reliving Jesus’ journey to Calvary and his crucifixion, or the hundreds of believers and tourists, wearing the mandatory skull cap, whispering to the Western Wall (the Wailing Wall), and inserting private notes in folded papers between the stones. Looming over the Wall, on the other side, is the Temple Mount, as old as Abraham’s sacrifice. This place is a storybook. This is also where the oldest grievances of man seek resolutions in the divided present. The boy with the knife wants to rewrite the story in blood, and the Old Jerusalem is armed to deny him martyrdom—and paradise.

It is memories, as ancient as the restored ruins of the holy lands, that power politics in Israel today. Here, since its birth in 1948, two versions of victimhood have been in combat. The modern state of Israel, born out of a UN-sanctioned partition of Palestine, continues to assert its legitimacy, its right to be alive, by being both democratic and militaristic. Palestine, which has only limited administrative autonomy in the West Bank and the Gaza Strip, has turned the struggle against the occupier into a macabre theatre of martyrdom. On the streets of Jerusalem today, emptier than the previous day, this shared curse of injustice is at play, and the daily killings may not yet qualify to be the third intifada–or what has come to be known as the knife intifada—but it has acquired a method, a predictability: the lone teenager at the bus station, aiming his knife at the old woman; the boy stabbing another boy of the same age, just because him being Jewish; or the adolescent revolutionary charging at the security guard…the so-called lone wolves are united by anger, and, in the words of sympathising leftist commentators in the media, the frustration of being secondary Israelis (this time they are from Jerusalem itself), orphaned by leaderships on both sides of the fence. President Mahmoud Abbas, who may have tacitly endorsed the violence (he has certainly not said anything to stop it), is an ineffective bargainer in their eyes. And Benjamin Netanyahu, the Israeli prime minister who has won four elections, for them is a rabid right winger least interested in a two-state formula. Justice needs new benefactors, outside the straitjacket of electoral politics.

The knife symbolises more than the anger of exclusion; it is sharpened by a history of hate. I read this in the liberal pages of Haaretz, by Yossi Kuperwasser, formerly of Israeli Military Intelligence. “The large number of knife attacks is a product of the long running educational war conducted by the Palestinian leadership, including both Abbas and Hamas, with the aim of inculcating the minds of the young generation with the fundamental principles underlying the Palestinian collective consciousness, to wit: There is no Jewish nation, since Judaism is only a religion, and the Jews have no history of ruling the Land of Israel, which is Palestine. Therefore, there is no justification for a nation-state for the Jewish people, and certainly not here. The mission of Palestinians, who are victims of the injustice entailed in the continued existence of the ‘occupation state’, is to accelerate its inevitable disappearance by means of struggle and sacrifice, which are the core of Palestinian identity.” This is a fair reading of the Palestinian mind, but it excludes gods from the narrative—and the street. It is inevitable that the ‘failure’ of the Palestinian leadership will take the freedom struggle from its nationalist and tribal identity to the global jihad, which takes out the knife for the creation of a land with justice bigger than Palestine. The distance between Israel’s existential tension and Palestine’s liberation struggle is not shrinking.

It is this Jerusalem of fear and loathing, of vigilance and vengeance that has set the stage for the concluding part of President Pranab Mukherjee’s five-day Jordan-Palestine-Israel tour. It’s a first; no Indian head of state has been to these countries before. Too much history is at play here, and it cannot remain immune to the war against civilisation raging in the neighbourhood. And the Israel Mukherjee has come to visit is no longer the old bogeyman that inhabited the Third World rhetoric of New Delhi. It is currently a good friend of India, and a major defence partner, and both are victim states of radical Islamism. Mukherjee could not have hoped for a nation more ideal for a presidential conversation on reconciliation— and non-violence. Earlier, in Amman and Ramallah (the West Bank town that is the administrative headquarters of the Palestinian National Authority), the president was pretty generous in reaffirming India’s historical solidarity with the Palestinian cause; in West Bank, while receiving an honorary doctorate from Al-Quds University, he did even tell the audience that India voted against the division of Palestine in the UN vote. Now, sitting in the visitors’ gallery in the Knesset, I’m listening to my president.

These are the defining sentences: “ In the period after Independence, our countries travelled different paths…India and Israel are separated by two seas but joined by their common belief in the power of diversity and democracy.” Of course, there are a lot of words on mutual appreciation and economic cooperation, but did Israel miss the kind of presidential nod Palestine received for its struggle, particularly at a time when Jerusalem has become a dangerous place again? Maybe I’m wrong. Hasn’t he been sending out a message when he stressed “diversity and democracy?” After all, why should the president allow himself to be provoked by street violence, no matter its historical backstory? Hasn’t the leader of opposition in the House taken his cue from the president’s celebration of plurality? He is inspired by the Indian example of inclusion, best illustrated by the Hindu-Muslim coexistence; his appreciation is a tribute to Mukherjee and a rejoinder to Netanyahu. Bibi is not bothered; he is an inexhaustible political beast, always in combat mood, making enemies and losing friends in alarming rapidity. He cannot even take Obama’s Washington for granted. This solicited isolation only makes this suave nationalist more aggressive in his defense of the unforgiving Israel. In his Knesset speech in the presence of the Indian president, he is political and passionate, standing up to terror and naming it. And he captures his admiration for India in just four letters: Modi. You are a true friend, he tells the president. The question is: can you be a true friend of Palestine and Israel at the same time?

It is an enduring tragedy of the Middle East that the acceptance of one as a friend demands the total repudiation of the other. For the so-called moral majority,Israel markets it villainy as victimhood; they even have a term for it: the Holocaust blackmail. This portrait of the Jew as a land stealer reduces one of history’s biggest projects in dehumanisation to political sentimentalism, for the displaced Palestinian is the only one who deserves solidarity in this portrait. The reality of Jews losing their homelands—and their lives—across Europe cannot by nullified by the stereotype of the settler-coloniser. The ‘occupied’ Palestine, too, has a backstory of the Arab denial of Israel’s existence itself; even today no other country continues to be denied its right to exist as Israel does. Will there ever be a global consensus on Israel, its existential struggle? In one the finest books on Israel, part memoir and part history, My Promised Land: The Triumph and Tragedy of Israel, Ari Shavit writes, ‘On the one hand, Israel is the only nation in the West that is occupying another people. On the other hand, Israel is the only nation in the West that is existentially threatened. Both occupation and intimidation make the Israeli condition unique. Intimidation and occupation have become the two pillars of our condition. Most observers and analysts deny this duality. The ones on the left address occupation and overlook intimidation, while the ones on the right address intimidation and dismiss occupation. But the truth is that without incorporating both elements into one worldview, one cannot grasp Israel or the Israeli-Palestinian conflict. Any school of thought that does not relate seriously to these two fundamentals is bound to be flawed and futile. Only a third approach that internalises both intimidation and occupation can be realistic and moral and get the Israeli story right.’ There cannot be a better description of the enduring Jewish question.

Today the story of the paranoid Israel is conveniently built on the idea of occupation alone. The yearning for Zion is a permanent Jewish state of mind, and it is this undying quest that keeps Israel alive as a home for history’s most brutalised orphans. This evening, the view from Zion is of an idea trapped between mutilated geography and hateful history.