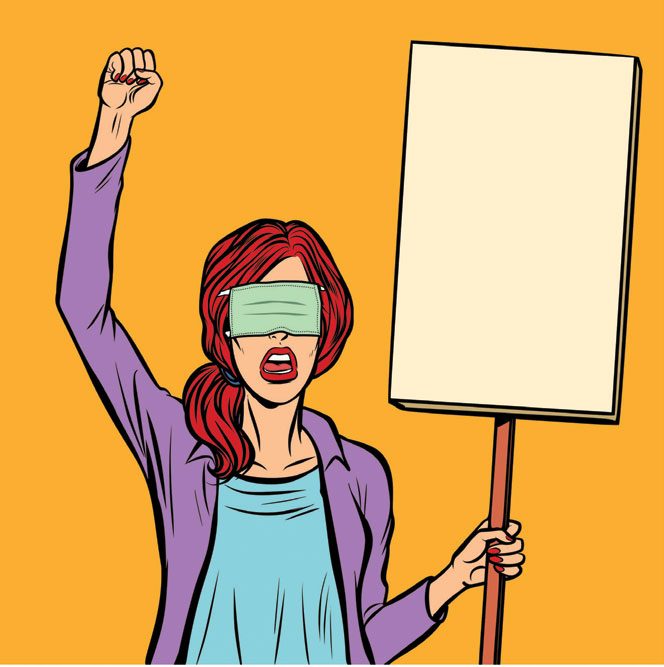 
IN A FEW YEARS, or perhaps in a few decades, when we look back to this time, there will be only one question: why did America stumble so badly in the face of the Covid-19 pandemic? At the time of going to press, Dr Anthony Fauci, the face of the pandemic in the US, testified to the US Congress on June 30th that daily cases could exceed 100,000 per day. With over 120,000 people dead, 14-21 million unemployed, the near bankruptcy of industries like airlines and hotels, highly partisan and dysfunctional government branches in Washington DC, an exploding reliance on the government to prop up asset valuations and daily life—it is no stretch to say that America finds itself in a position it is often not used to: unsure of what to do next.

To make matters worse, there is also a great social fraying underway that manifests in the most trivial (and yet all too politically fraught) of discontents: a refusal to wear face masks in public. To many, this is a state of puerile resistance and paranoid foolishness that speaks to political partisanship gone mad. The reality is however more complex. Should a modern-day Alexis de Tocqueville visit America again, he’ll find a people who are, as individuals, generous, thoughtful, free-spirited, egalitarian and enterprising. But as a collective, their politics has transmogrified them into a people who willingly condone a competitive race to the bottom where the miserable, paranoid, rent-seeking and violent xenophobes among them live freely. The mythologies of American politics, rightly, rely on the individual to construct the nation’s self-image, but the reality of American politics has vividly relied on the debasement of rhetoric and casual cruelties that crowds always enjoy. This, of course, is true in most democracies. But America, or rather American politics, has historically found means to extricate itself from such downward spirals in the form of leaders who can speak a language of ennoblement which they borrow freely from their assorted church traditions that speak of brotherhood and neighbourly love. From JF Kennedy to Barack Obama, the cadences and lilt of that tradition has produced a feel-good nationalism that is more sentiment than substance. The cynic, or the realist, understandably, will point to innumerable instances of structural injustices within American society. But to belabour this point is to miss the forest of progressive victories in American society—from gender equality to gay rights—for the trees of American atavism that continues to seduce many to indulge in the original sin of America: violence against blacks and other minorities. But today, that language of amity, hope and promise is largely missing and when spoken, including by Barack Obama on Zoom chats, it smells like yesterday’s fish.

Ever since the tragedies of 9/11, the catastrophic Iraq War of 2004-2012, the Great Financial Crises of 2007-2010, the 2020 pandemic and the personal and public catastrophes that have followed have ripped the bandages over long-suppurating wounds. To this end, 2020 may very well turn out to be analogous to us asking about America what we now ask, with the benefit of hindsight, of Germany in 1933 (how could Hitler rise to power?) or India in 1947 (why did the country partition into two?) or Russia in 1917 (how did the Bolsheviks take over the country?) or Japan in 1905 (how could Japan defeat Russia?) or even France in 1789 (why did they storm the Bastille?). A year in which events followed, one after the other, and each of them began to accrete a density that history grants to some events which steers nations on a different path of history than previously expected.

The slow-moving present catastrophe will inevitably be traced back to the atmosphere of vitriol, division and demoralisation that has entirely been of the Trump administration’s making. This includes his near pathological need to appear powerful, unchallenged irrespective of the facts and the truth of the hour. The result of this abnormally delinquent leadership was not just an unprepared administration when the pandemic struck but also one that made things worse for technocrats who served in it by obfuscating reality itself, often solely to manage political messaging about the pandemic.

None of this—no matter how the presidential elections in November turn out—speaks to the deeper and relatively less tractable question: would America under a different president have had different results? The answer, irrespective of whether it was Republican or Democrat, is a qualified maybe. From Gerald Ford, who ordered mass anti-flu vaccination in 1976 despite much criticism, to Barack Obama who tackled H1N1 epidemic with considerable alacrity and seriousness, American politicians across party lines have repeatedly leveraged their access to resources and the power of the bully pulpit that the presidency offers. Till right now, when along with Trump’s intransigent behaviour, other forces of historical contingency have revealed.


In small ways, the resistance to wear masks is the ordinary American’s way of challenging the transformation of the state from an entity defined by constraints and laws imposed on the executive to one that has total dominion over human bodies in the name of an emergency

The Italian philosopher Giorgio Agamben famously noted that in ancient Greece, they had two separate words for what we commonly call ‘life’. One was ‘zoe’, which referred to all that were alive, which was common across animals, microbes, humans and the gods. And the other was ‘bios’, which referred to life that was contingent upon human endeavours. Thus, for Aristotle, there could be ‘life of the mind’ (bios theoretikos), ‘life of pleasure’ (bios apolaustikos) and the ‘political life’ (bios politicos). But what he called ‘zoe’ was largely outside the schema of politics. For much of Western history, this distinction was often maintained—between the living and a ‘qualified life’. The consequence was an understanding of political power that was often located in the frameworks developed by juridical-legalistic institutions. Few countries took the legalistic boundaries of the state more seriously than America—the result of which was a natural resistance to state power, which is ingrained widely in its political consciousness. In Asia, however, this distinction was often murkier. The state has traditionally been indistinguishable from the mai-baap or the benevolent Confucian overlord who is in charge of deciding what constitutes a good life itself.

However, with the beginnings of modernity, the traditional Western state—with America as the final holdout against this trend—has increasingly asserted its power on the very body of all beings. This, the French philosopher Michel Foucault argues, has arrived in our social life in various forms—including the state arbitrating on what constitutes mental insanity. Thus, over the last 150-250 years, we have had elaborate mechan-isms and modalities that seek to assert bodily control over all life itself, which in turn has birthed a form of state power that is different from the traditional Western ideas of a sovereign contained by juridical norms. The acrimonious, and occasionally violent, debates over abortion in America is a testament to this deep schism in the American people’s ideas of what sort of state power ought to be used to control or liberate the human body. To add to this, following the German theorist Carl Schmitt, the state was understood to be that entity which had the ‘power to declare a state of exception’.

But now, with the Covid-19 pandemic, what we have is an amalgam of two forces: one, the state of exception has become a permanent norm and two, the realm of zoe (bare life, as Agamben translates it) has pressed its way into the polis. Thus, when we see ordinary Americans resist an imposition to wear masks, it is hardly surprising they are often ‘traditionalists’ and ones who rely on American history, invoke claims of freedom, to resist the normalisation of a state of exception where the state makes demands over their bodies. In small ways, it is their way to challenge the transformation of the state from an entity defined by constraints and laws imposed on the executive to one that has total dominion over human bodies in the name of an emergency. Like all fossils, they appear odd and laughable. But they also speak to an era of political consciousness that we have largely forgotten. Unfortunately for them, much like the dinosaurs in the face of an asteroid, the stubborn allegiance to the past makes them uniquely unsuited to face the totalitarian powers of an unforgiving enemy that is only 10 nm long but still demands collective action coordinated by a strong state.