The Power of a Hashtag 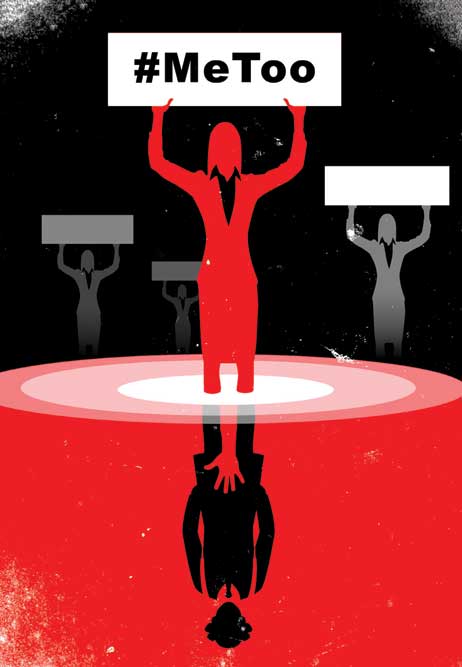 A FRIEND OF MINE recently wrote a memoir which chronicles his battle with bipolarity. It also details four years of childhood sexual abuse at the hands of an older first cousin. He spoke to his mother about the possible fallout of a memoir that hits so close to home. She was unconcerned about what may or may not happen once the book sailed into the world. She told him, “I knew you needed to write that book. Writing it helped you.” When he said he could have written it but not published it, she said, “Reading it will help others.”

As #MeToo spreads across social media platforms, I can’t help but think of this anecdote. Writing is an act of agency. It is a reclamation of a plotline that may have been garrisoned by another. It is a way to seize control of a moment in time when one’s independence of thought and action was sabotaged by someone else. Writing on a social media platform is a way to tell others, ‘This happened to me also.’ The ‘also’ being the crucial part, because when we are alone we might be ‘victims’, but together we are toughies.

On October 5th, The New York Times ran a ground-breaking investigation, ‘Harvey Weinstein Paid Off Sexual Harassment Accusers for Decades’ written by Jodi Kantor and Megan Twohey. The article spelled out years of abuse meted out by the Hollywood producer (his movies have earned more than 300 Oscar nominations) to dozens of female actors. The exposé by the Times and The New Yorker revealed an intricate web of power and threats,deceit and lies where Weinstein used his authority to coerce women into acts against their choice.

On Sunday, October 15th, actor Alyssa Milano (best known for her roles in Charmed and Melrose Place) tweeted, ‘If all the women who have been sexually harassed or assaulted wrote ‘Me too’ as a status, we might give people a sense of the magnitude of the problem’. In just over 48 hours, more than 12 million people (and counting) across the world had shared their experiences of sexual abuse and harassment after #MeToo exploded on social media.

The 2016 Global Gender Gap Report, published by the World Economic Forum, ranked India 87th out of 144 countries. It is hardly surprising then that #MeTooIndia soon became a force of its own. In metros like Delhi, it would be hard to find a woman who has not been sexually harassed or abused. The power of the #MeToo hashtag was that men too came out with stories of harassment, proving that women are the main, but not the only, target of sexual abuse. One is not here to commend those who did post ‘MeToo’ on their time lines. There are numerous people who have known assault but do not feel a need to discuss it. That is their choice, and it is one to be respected. I, for one, do not feel compelled to detail what happened when and where. It is not the details that matter. It is simply the fact that it happened. And that it happens all the time in ways big and small.

It is easy to be cynical of hashtags and clicktivism, but the torrent of stories on social media proves a simple truth—sexual harassment is a norm, not an exception. It happens everywhere. The perpetrators are everyone. It happens in tuition classes and hotels, parks and buses, trains and taxis, homes and offices, markets and theatres, schools and dorms, hospitals and parlours. The assailants are everyman, uncles and strangers, fathers and friends, cousins and drivers, acquaintances and husbands.

The onus of MeToo must not start and end with those who have been sexually abused. It should move on to those who know they have been guilty of those acts

The outpouring on social media is a story in itself. It shows that sexual harassment is not headline worthy when a media moghul is made to account for his actions. It is headline worthy simply because it is a daily travesty faced by millions. The Weinstein case holds important lessons for India. The investigation did not just reveal the atrocities of a lone wolf on the hunt for vulnerable prey. Instead, it threw the lid off a culture of complicity. Sexual harassment and abuse cannot be reduced to happenstance, where an opportunistic man catches a woman (or man) off guard. Instead, it is about a system that bolsters it, and turns a blind eye to it. The ubiquity of ‘MeToo’ shows that when it comes to sexual abuse, we are all equals. It does not matter if you are Angelina Jolie or Gwyneth Paltrow, dressed in a parka or a bikini, whether you are sober or drunk. All that matters was that you were there at that moment.

Jodi Kantor of The New York Times told Slate that when they started investigating the Harvey Weinstein stories, they examined a pattern. Weinstein’s behaviour, she says, was an “open secret” “shrouded in rumour” in Hollywood. The challenge was to get people to talk about it on record, and to collate the evidence.

The silence of Bollywood around the Weinstein and ‘MeToo’ issue is telling. None of the stars have spoken out publicly on the matter. Last year in a candid storytelling session of Kommune India, Tisca Chopra spoke in detail about the casting couch and a “reptile” director, who has had a “scene with pretty much all of his actresses”. Once again it was an open secret in Bollywood that “agreeing to do a film with him was pretty much agreeing to being his pet squeeze for the duration of the shoot”. She says he called her to his hotel room “to discuss the script” over dinner. When she enters, she finds him clad in a satin maroon kurta and lungi. The details sound surprisingly Weinsteinish. The ‘MeToo’ hashtag reminds us that Weinstein is a phenomenon and not an individual. Bollywood has its own reptile directors and producers, and, hopefully, it is just a matter of time before they are outed.

Jia Tolentina writes in The New Yorker about how the ‘Weinstein scandal has prompted many journalists to examine the open-secret reputations of a handful of well-positioned men in their own industry’. Whether it is Bollywood or the media or politics, the deeds of ‘dirty old men’ are all too familiar in India. These incidents are recounted from woman to woman, but the reality is that we do not hold the men accountable for their actions. We tell each other stories of who tried to cross the line, who did transgress it; we caution each other, but we seldom ask for justice. These ‘whisper networks’ hint at the problem, but by never seeking recourse, they embolden a Weinsteinish culture. Incidents of sexual harassment and abuse tend to be shrouded in shame and self-blame. Speak to people who’ve gone through it and the familiar strain is—‘I should have done something’ or ‘I should have done something more.’ The present outpouring is a powerful reminder that the ‘victim’ is not at fault. The MeToo that we need is one where those who are guilty of harassment and abuse come out and admit it, even if it is only to themselves. Once again, abuse is not only about strangers in a dark alley, holding a knife; it is about friends who make a drunken lunge in a taxi at night; it is about friends’ boyfriends who get grabby; it is about colleagues who thrust you against the stairs; it is about uncles who pretend to watch you sleep. The onus of MeToo must not start and end with those who have been sexually abused. It should move on to those who know they have been guilty of those acts. And, again, these aren’t always random rogues on the streets, these are just as possibly friends and acquaintances on social media—the same people who like and share the ‘MeToo’ posts.

Of course, a hashtag isn’t going to lead to a revolution. But if it gives us pause to ponder, if it offers a sobering moment, where we realise just how universal sexual harassment is, and if we acknowledge the need to hold abusers to account, it is a start.