A ban is not the answer. Let tradition live with strict rule of law 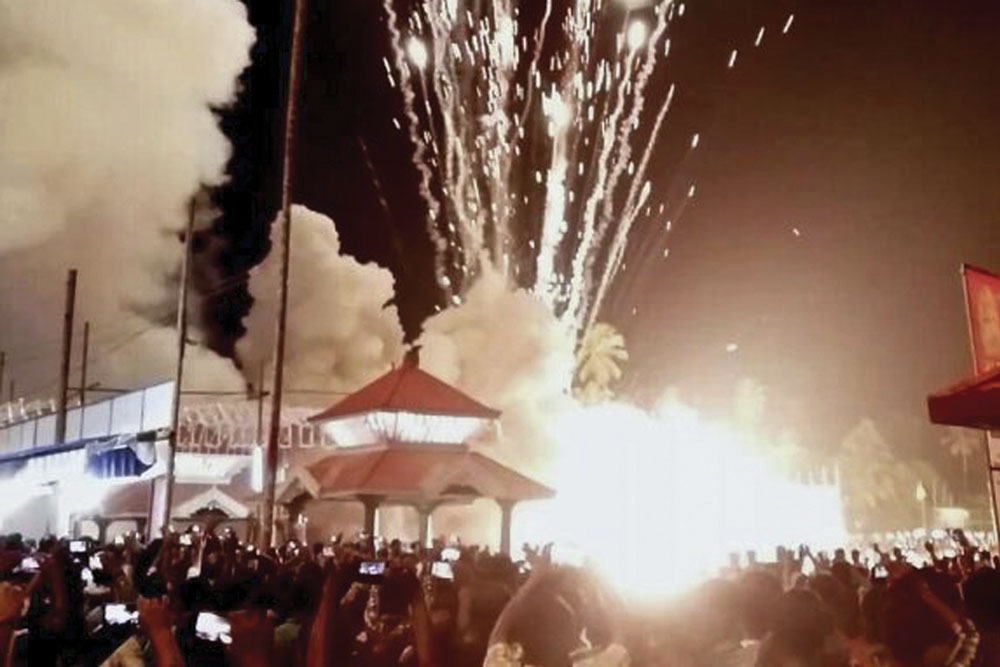 ARGUMENTS IN FAVOUR of banning fireworks following the recent tragedy in a Kollam temple raise some important questions about tradition, modernity and the rule of law. To begin with, they aren’t either exclusive or contradictory concepts. More regulations are in order to resolve the contradictions between them.

In the immediate aftermath of a tragedy in which 109 lives perished, emotions were running high, understandably, but then the framing of any law requires considerable freedom of thought. A blanket ban on pyrotechnics is a knee-jerk reaction, especially when the cause of the accident has been found to be a competitive zeal over grander displays of fireworks.

Let’s face it: high-decibel noise induces not only hearing loss, but could have long-term damage to vital organs; for the elderly, it is a potential health risk. Animals, especially dogs, often bear the brunt. Therefore, it is essential that guidelines and rules are adhered to when using fireworks. That most of these were not followed, as it appears, as fireworks went on till 3.30 am on 10 April at the Puttingal Devi Temple at Paravur in Kerala, a scenic spot, is an unpardonable crime.

Massive explosions were triggered off when a stray cracker brought down a 16-ft concrete structure storing a huge arsenal of fireworks. Many of those pushing for a ban on these in Kerala argue that firework displays are a vainglorious symbol today, even a dangerous ritual at times, especially in a densely populated state with hundreds of places of worship.

The emphasis has to be on implementing the rules of the Explosives Act. “There is ample social support for the pyrotechnics in traditional festivities here, making it difficult for any political power to go ahead with a blanket ban. That has ensured that despite earlier such mishaps involving fireworks, the tradition has carried on. In fact, the biggest danger to crowds is from poorly made and cheap fireworks that flout all manufacture rules and use banned substances that are aimed at the loudest noises and the biggest fire showers in a very competitive environment. This is where control has to be at its most stringent,” maintains a social scientist.

The Kerala government has to make the manufacture of safe crackers a priority concern, as also crowd safety at annual festivities that feature pyrotechnics. But the regulations are also not easy to enforce without provoking the ire of powerful and competitive temple authorities. Any solution to the issue will have to find a fine balance between local sentiment on fireworks in traditional festivities and the safety of hundreds of worshippers gathering at celebrations such as those at the famous Thrissur Pooram festival.

According to Dr MGS Narayanan, an authority on Kerala history, fireworks began to be used for entertainment, especially as an inherent part of traditional celebrations and festivities, after Arab traders with strong ties with both China and India brought them to the Malabar shores. They then spread to other parts of India, and came to be a sign of the grandeur of the mighty in celebrations of various hues. Paintings on the marriage procession of Dara Shikoh in the mid 17th century show fireworks in the background. According to historian Satish Chandra, a whopping Rs 80,000 was spent on the 17th century marriage of Adil Shah, ruler of Bijapur. The British carried on the tradition with cracker factories in Calcutta, which later moved to Sivakasi in Tamil Nadu.

There is little doubt that fireworks are a panoramic socio- historical tradition that deserves to be continued. If the state government yields to those calling for a blanket ban on fireworks, it would be the jittery response of a regime that is unsure of ensuring the manufacture of safe products and their risk-free use in public celebrations. It would also be a sign of its inability to implement widely acceptable solutions that respect the tradition of festive pyrotechnics while also enforcing strict quality control over the manufacture and use of crackers among crowds in public places.

A standard operating code issued to all temple and church authorities on pyrotechnic displays, enforceable by law and with clear accountability guidelines for violations, will go a long way to prevent another Kollam tragedy in a country where festivals, irrespective of religion, are spectacular.