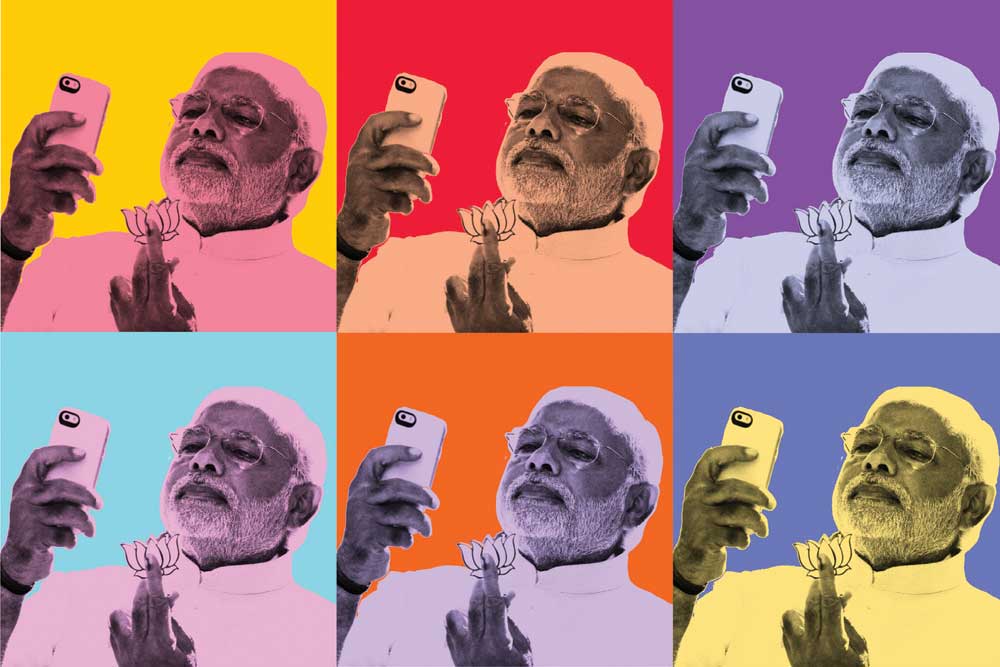 IT TAKES A certain insouciance to quote one of pop culture’s most famous movie lines from Star Wars while standing next to Hugh Jackman, the star of another science fiction franchise. But Narendra Modi has never been short on confidence. Since September 2014, when he declared to the crowd at the Global Citizen Festival at Central Park in New York, ‘’May the force be with you,’’ Prime Minister Modi has ensured he maintains his pull among young people.

Whether it is asking a mother “yeh PUBGwaala hai kya?’’, in reference to her video game-playing son or referencing Uri’s ‘How’s the josh?’ at the inauguration of the National Museum of Indian Cinema in Mumbai, Modi clearly keeps himself abreast of what’s contemporary. In a recent interview with Rajat Sharma on India TV, he reinforced his image as India’s first pop culture- savvy Prime Minister by mentioning Kapil Sharma’s comedy show as well as the plot line of the mega-blockbuster Avengers: Endgame. The intent of both: to poke fun at Rahul Gandhi.

The world over politicians seem to be drawn to pop culture, often riding piggyback on what’s trending, to connect with youthful voters. Few politicians have mastered it as well as Barack Obama, who became the first sitting president to appear on Jay Leno’s Tonight Show in 2009, following it with several similar populist stints, from reading mean tweets on Jimmy Kimmel’s show to publicly expressing his early admiration for phenomena such as Homeland, Hamilton and Game of Thrones (he was the only person in the world to receive Season Six screeners from HBO before the episodes aired on television).

Since then, the unthinkable has happened, and a figure of pop culture, largely the creation of reality television and tabloid newspapers, has become president of the US, digging deep into a groundswell of anger and resentment against the politics of entitlement. Most recently, a stand-up comic, Volodymyr Zelenskiy, was elected president of Ukraine, by uniting his nation against toxic nationalism, using Instagram and a TV show in which he plays Ukrainian president—imagine Julia Louis-Dreyfus who plays bumbling former president Selina Meyer in the TV show Veep becoming president in real life. It is also the plot of a new movie, Long Shot, where a six time Golden Globe nominated actor playing US president on TV becomes president in actuality.

Modi clearly has no time or inclination to watch movies or prestige television, unlike both Atal Bihari Vajpayee and LK Advani, both former film critics of the RSS newspaper Organiser, who retained their lifelong love for cinema even when in power. Vajpayee would regularly screen movies at the specially constructed auditorium at 7 Race Course Road (now renamed Lok Kalyan Marg) while Advani would often have private shows at the Films Division Auditorium in Delhi. Modi said laughingly on the show with Rajat Sharma that he didn’t need to watch movies as there was enough entertainment in the political domain.

Chasing the youth vote is an integral part of the cool-politician vibe, one who stays up all night surfing the internet to check reactions to the Balakot air strikes, or knows about memes related to him

In his book What Jefferson Read, Ike Watched, and Obama Tweeted: 200 Years of Popular Culture in the White House, author Tevi Troy says how a president engages with popular culture also tells us about the people who elect him, the changing nature of politics and society, and the tension between high, low and middle-brow pursuits. This is quite true of India as well. So Modi, who understands the passion for movies in India, tweets to Bollywood stars Ranveer Singh and Vicky Kaushal: ‘It is time to tell [youngsters]: Apna Time Aa Gaya Hai [our time has come] and that it is time to turn up with high josh [zeal] to a voting centre near you.’ Rahul Gandhi, on the other hand, tends to channel esoteric and evolved obsessions such as Vipassana and Arjuna’s famed concentration. When he went middle of the road, describing the Goods and Services Tax as Gabbar Singh Tax in 2017 during the Assembly elections in Gujarat, in a reference to the all-time hit Sholay (1975), he had better success.

Political scientist Suhas Palshikar says, without being elitist, one must keep in mind that pop culture has many layers and possibilities, and what Modi chooses to use is more important than what he doesn’t. “The rawness that he has brought to public discourse has two components. One is the rawness of demeaning the opposition at any cost—invoking the base sentiments among the public. But at the same time, rawness also seeks to relate itself to the contemporary styles which also represent rawness in the realm of ideas, culture and taste.’’ Leaders select carefully what they want to pick up from current trends. It is neither a coincidence nor an instance of split personality that the Prime Minister picks up those aspects of the modern that help imageries of coarse power rather than nuanced authority. ‘‘Since 2013,’’ adds Palshikar, “the single most critical contribution of Modi is to cultivate a popular culture of coarseness—in politics and in social life.’’

In democracies, he adds, a certain roughness is always inevitably implicit. A leader who exploits that sharpness instead of seeking to tame it is unlikely to be chronicled as great but would stand a good chance of immediate success.

Chasing the youth vote is an integral part of the cool- politician vibe, one who stays up all night surfing the internet to check reactions to the Balakot air strikes, or knows about memes related to him, or is aware of which journalist is trolled on social media and how, or uses words like ‘swag’ in his tweet. As the Prime Minister told Akshay Kumar in an interview for ANI, he finds great value in analysing social media: “Ismein common man ka sense milta hai… finish nahi hoti par sacchai haath lag jaati hai [You get the common man’s sense. There’s no sophistication but there is truth].” He compared it to the difference between five-star and street food.

In the 2014 General Election, 24 million youth were voting for the first time. This time that number has risen to 130 million—though not all might vote. For them, the Prime Minister has tried hard to retain his image as a tech evangelist, an early digital convert and a politician at ease with global fashion as well as Indian traditions—so he can speak fondly of eating at a Singapore restaurant with that country’s prime minister and his wife, and also be a proud son of Maa Ganga while doing aarti in Varanasi.

Nor is the Prime Minister alone in his mining of pop culture, mixing low brow with high tech. Mamata Banerjee, who has fielded more than her fair share of actors as Lok Sabha candidates this time, has a colourful line of descriptors for the Prime Minister, the most contentious of which is Haridas Pal—an allusion to a fictional Bengali character with delusions of grandeur. Tejashwi Yadav often refers to his former ally Nitish Kumar as Chacha 420, referencing the popular Kamal Haasan movie Chachi 420 (1997), and former Uttar Pradesh Chief Minister Akhilesh Yadav is a goldmine of trendy recalls, from describing the elections on Twitter as ‘Endgame’ for the Modi Government to saying acche din are more elusive than the alleged discovery of the Yeti by the Indian Army.

The Prime Minister gets quite a bit of help in his attempt to tap youthful minds. Apart from the communications team at the Prime Minister’s Office, headed by communications expert Hiren Joshi, who has been working with him since 2008, he also has an outreach team that gives him constant feedback from the ground, prepping him for his rallies with regional colour, information and swag.