Still Too Close to Call 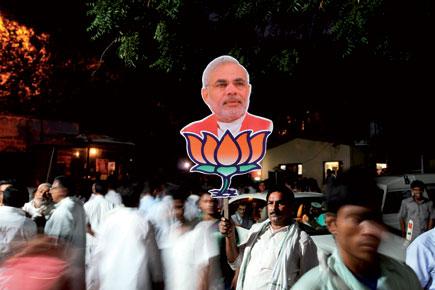 Bustling and jostling with giant rallies and big-screen showmanship, the final leg of the Delhi election has been more entertaining and endearing than expected, ending on a note of suspense over the electorate’s mood.

In this last week of electioneering, Delhi has been entertained with some good ol’ political theatrics. All parties and their men turned on the heat in their campaigning, pushing decibel levels to the max. Star campaigners descended on the battle ground. ‘Vision’ documents instead of manifestos were unveiled. Controversies were courted and satirical abuse was hurled either way. Political pot-shots were taken in all public spheres. No stone was left unturned, no sarcastic jibe was left unsaid to tap the josh of Delhiwaalas.

All four corners of Delhi was buzzing and busy hosting the top guns of all three parties. A worried BJP was seen hard at work. Once again banking heavily on Narendra Modi to steer the party to victory, the party had the Prime Minister address five rallies in all. In the final showdown, Modi addressed two back to back rallies. Emblematic of his political oratory, he kept his message short and crisp, unlike his usual long speeches, and his half-an-hour interactive session with the crowd was snappy, aggressive and emotionally charged.

On Tuesday, 3 February, Modi chose to return to the same ol’ Japanese Park in Rohini from where he won Delhi for BJP during the 2013 Assembly polls (the party won the most seats but fell short of a majority). The same venue that was thronged by people back then, saw a rather dull crowd this time round. The BJP’s rock star managed to draw a crowd of just a few thousand. Yes, that is too small a number for the effervescent Prime Minister. Making his entry via helicopter, bringing with him a trail of dust and dirt, Modi made a landing just when Kiran Bedi took the stage to speak. The Chief Ministerial candidate of BJP who tries to imitate the style of Modi while speaking fails to impress anyone. She comes across like the principal of a government school going amuck with her words. If BJP loses a few extra seats, it would be on account of Kiran Bedi being allowed to open her mouth. It’s no kidding when I say Rahul Gandhi receives more roars and claps than Bedi. The former police officer is a really bad orator, who, in case does manage to become Delhi’s next Chief Minister, needs to make oratory lessons a top priority.

With such a dreadful speaking style, Bedi fails to enthuse the crowd. But fortunately for BJP partymen, their hero still attracts the loudest roars from the dim crowd whilst lapping up every word he utters as he targets his rivals. A somewhat similar scene prevailed at Modi’s Ambedkar Nagar gathering yesterday. By strategically picking a smaller ground, BJP created an impression that the rally was a mega hit among the residents of adjoining areas. In order to woo underprivileged voters, Modi harped on the same vikas agenda, and talked about central welfare schemes. Slinging muck at his political rivals by using terms like “bazaaru log”, Modi managed to win some applause. However, amid this dull cheering, people were seen leaving the ground half way through his speech. Both of which is unusual for a Modi show.

Some kilometres away, in another part of Delhi, another campaign was in full swing. Unlike the Modi shows, an Arvind Kejriwal show is as disorganised as a Rahul Gandhi speech. On a bustling busy street opposite an equally busy cinema house, Aam Aadmi Party Chief Kejriwal was holding his last rally of the day at Tilak Nagar. Though he was running almost three hours late, the crowd, undeterred by the February chill, waited patiently. This was a crowd bustling with josh—zeal. Making a hasty entry in his aam aadmi avatar, he held his audience enthralled. Every word and sentence of this man in a red sweater was met with thunderous roars and whistles. The tiny narrow road was packed from corner to corner. Everyone wanted a glimpse of their very own man.

That’s the sentiment on the streets of Delhi. The once- upon-a-time josh which was synonymous of Modi has moved. And Kejriwal has the hearts and minds of the people.

Reading the pulse of Delhi, it has become certain that the electoral fight in the city is between the haves and the have-nots. The aam janata have found their messiah in Kejriwal. From the habitants of jhuggis to drivers, maids, auto drivers and even chaiwaalas have found their leader in Arvind Kejriwal. The papadwaalas who thronged the venues of Modi rallies are all staunch supporters of his rival in Delhi. “Woh humare liye kaam karega, hamaare bhale ke liye kaam karegea”(He will work for us, for our welfare), says Dinseh Paswan, who had come from Bihar a decade ago to earn a better living in ‘aspirational Delhi’. Trekking all the way from Nangloi, Dinesh and his fellowmen from the same neighbourhood, were among the Kejriwal voters thronging Modi rally at Rohini to make some extra money selling chana pappad.

Surprisingly, many of AAP’s staunch supporters had voted for Modi during the Lok Sabha polls. Why shift their vote? The common sentiment is expressed by young Santosh Kumar, who works as a delivery boy at the local grocery store in Tilak Nagar: “[Modi] will not be the Chief Minister of Delhi. He will continue being the Prime Minister wearing an achcha suit and travelling bahaar. We want a Chief Minister who is our own.”

Modi, meanwhile, who had harped on his chaiwaala past and played up that image, has found some support among Delhi’s haves. He had managed to win space and support among the middle-class. Modi’s rally may have managed to attract a crowd, but they seem divided in their voting intention. The have-nots seem disenchanted with Modi and his BJP, and resentment of Kiran Bedi has worsened the party’s prospects to the extent that his own popularity may have suffered.

Once upon a time, every action of Modi, every word of Modi, every rhetorical flourish of Modi was looked upon with awe and cheered. This time, the crowd response is less enthusiastic. The cheers are louder at Kejriwal’s rallies. With the electoral battle that is raging, this divide between the haves and have-nots will perhaps keep us in suspense for a few more days. The verdict, to be declared on 10 February, could swing in any direction. The Delhi election is too close to call.