The rustle of our pages came from a fast evolving society’s political and cultural churn. We never wanted the argument to stop; we held a perceiving mirror up to it 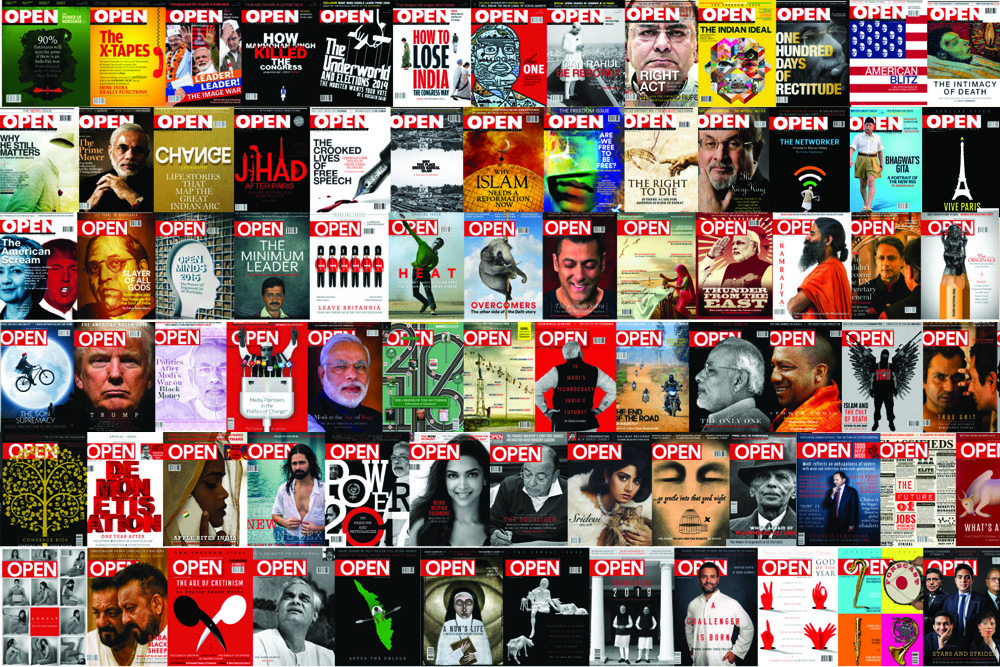 OPEN started in 2009 in an India that was so different from the place we inhabit today. It was a time when the pleasing certainties of continuity and conformity curtailed our impatience. India was in the trusted hands of those who assumed that power could be compatible only with the great political tradition they inherited. It was an assumption legitimised by history, familiar

linear. The Congress century, sustained by the privileges of genealogy and the flexibility of ideology, looked eternal, certainly for those who were fattened by the entitlements it provided. Entitlement is hallucinogen; it frees you from a moral conscience. The Congress-led UPA floated in its own acquired sense of moral immunity.

It was also the high noon of dynastic power without being in power. In the post-Rajiv Gandhi Congress, one of the world’s most enduring political families derived its power from a division between the church and the state. The sacred supremacy of the Family, still steeped in the memories of its role in nation-building, remained intact; the state, even without the Family’s direct control over it, became more obedient. The diarchy of a dutiful prime minister and a venerated extra-constitutional power centre worked perfectly. In the world’s largest—and the most volatile—democracy, the elected ruler was subordinated to the House that answered to none. It was too familiar a distortion to disturb the liberal conscience. A moral-proof establishment made it look natural. The idyll deceived us all.

Elsewhere, in the other big democracy, ‘change’ was no longer an idea banalised by slogans. A freshman senator, an outsider, made it intimate and liberating. The American Dream was real, not a reality show, then. President Obama was not as exciting as Candidate Obama. The poetry and the prophecy of the latter would stay longer than the overwhelming ordinariness of the former. The dignity and decencies of power would matter more than the dividends of power. The symbolism of post-racial politics would make America greater again. And biography would win elections. The Obama beginning would be remembered for its redemptive powers than its administrative rewards.

In India, the impatience was growing beneath the idyll, unnoticed by both the church and the state. ‘Change’ needed the authenticity of a voice.

WHEN I TOOK up this job in 2014, India was on the verge of a historic shift. Narendra Modi’s campaign for India—a campaign that was a cultural war as well as a political rejoinder—began long before 2014. It began from the last embers of Gujarat 2002. His struggle for a Congress- free India was more than a political campaign for a regime change; it was a movement for regaining the nation from so many officially manipulated isms. It was one man’s war on the system that kept people like him from the orbit of Delhi. He wanted to break into it, and stay there. He was the outsider before ‘outsider’ became a popular entry in the glossary of power after Brexit and Trump. In his struggle for power, biography was his strongest weapon. He didn’t abandon it even after his success.

In five years everything has changed. The sacred pillars of secularism and liberalism—ideas whose time has not passed, and won’t pass—had to abandon their convenient, and selective, self-righteousness. In Modi’s India, the secular doesn’t mean a repudiation of the religious; and liberalism, not the version marketed by professional liberals, doesn’t negate the nation. The aesthetics of the cultural right still mars the atmosphere, true, but the Modi era has brought a new moral order of power. The new political morality is yet to be comprehended—or acknowledged— by those who suffer from Modi Derangement Syndrome. It hardly matters. The poor and the normal majority want the order to stay, for their own sake. As India is being imagined with a new cultural intimacy, a shared sense of the past is not a rejection of modernity. It is not a return to the absolutism of a cultivated tradition either. It is about living in the present and setting an argument for the future with confidence.

This reimagined India owes everything to the kind of conviction politics perfected by Modi. There are pundits out there still calling him an autocratic populist like Putin or Erdogan. He is not, and India, whose democratic impulses are not contained by a lofty autocrat, is not Russia or Turkey. The strongman is not necessarily an anti-democrat. Some of the most influential strongmen were born in the fully evolved democracies of the West. Strongman Modi is a triumph of Indian democracy. The enormity of his mandate shows how strong is India’s emotional covenant with him.

It has been made possible by the merger of individual morality with political power. At a time when the liberal has retreated from the battlefields of power to the safety zone of echo chambers, Modi has made the struggle for power an existential fulfilment. Change demands that, and he is relentless, unlike any other politician of his generation. There is a terrifying sense of openness about what he wants, and how far he will go to achieve it, and it is this ferocity of conviction that makes him unbeatable. When the opponents still play by the rulebook of realpolitik, he creates his own rules. History has always indulged such men in power.

Going by the atmospherics, we may believe history is being monopolised by the charlatans and vulgarians of democracy. The world after Brexit and Trump has even spawned a publishing boom, in which most titles are a variation of either liberal crack-up or the redundancy of democracy. Every grand failure in history has resulted in an unsettling polarisation in politics. The failure of the traditional Left and the Right has given birth to the so-called populist, the redeemer-revolutionary from the extreme edge. The argument that sways India today is made not by an extremist. Modi’s metaphorical selves are born out of humility.

The Open Decade was a rewarding stretch of ideas for anyone in the business of informed argument and narrative storytelling. The rustle of our pages came from a fast-evolving society’s political and cultural churn. We never wanted the argument to stop; we held a perceiving mirror up to it. And that’s why our fifth edition of Open Minds—a list that celebrates the power of ideas and arguments—tells the story of change through the narrators and creators of change.