A newspaper that exposed the corruption of the Raj 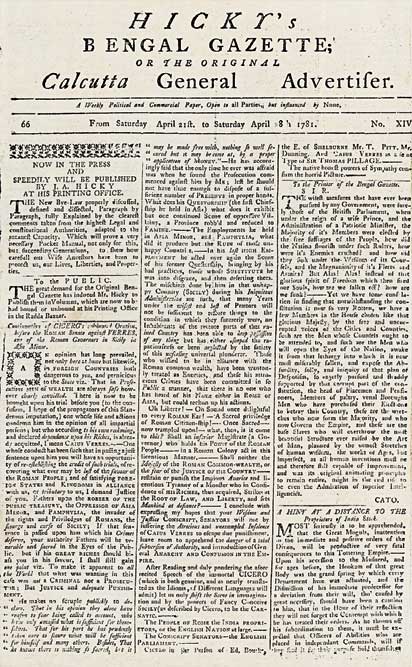 THIS WORK OF non-fiction is a source of inspiration and a rich entry to the field of media history that has received little attention in India. Hicky’s Bengal Gazette is recommended reading for not only historians and journalists, but for anyone who is interested in ascertaining the importance of a free press to rein in unchecked power.

In the 18th century, the outspoken voice of the Irishman journalist JA Hicky, based in Calcutta, put him on a collision course with the British East India Company. With an archetypal arc of a story—journalist takes on despotic authority figure—this book tells of how he waged a battle for press freedom, and what befell him afterwards (spoiler: the strategies used then, among them the law of criminal defamation, are still deployed to muzzle the media today).

Reflecting five years of research, this work adopts a protean narrative. A world in which the British Raj was just laying down its tentacles is richly painted—the fraught economic, social and political background of the time, including the famine in Bengal, the battles of conquest, and the loot that characterised India under the rule of the war- monger Warren Hastings. Using vivid images in a few crackling paragraphs, Otis conjures up the stench, squalor and chaos in jails and subaltern settlements of 18th century Calcutta.

The evocation of a world with its political, social and moral moorings segues into a brisk account and succinct assessment of Hicky’s editorial mission, including a campaign to get Calcutta’s streets cleaned and such issues as pay and promotion among army cadets.

We are shown Hicky’s transition from a non-political man, cleaving mainly to social commentary and civic issues, to a watchdog keeping an eye on British administrators. Hicky published news of wars waged by the British against Indian princes, and the terrible impact of these wars, most notably the starvation deaths of Indians.

This muck-raking, press-crusading path put Hicky at odds with Hastings, when the corruption kingpin forbade his post office from carrying Hicky’s newspaper while allowing the free passage of a competing newspaper that was friendly to the administration.

Hicky then set aside his non-political stance, and enlisted the help of anonymous correspondents to expose ‘three main means of corruption: contracts, nepotism, and taxation without representation.’

Hicky emerges as a complex and well-rounded character, full of the prejudices of his times, such as a belief that Indians were inferior to the British and that women were inferior to men. He also had a few views that were surprisingly progressive for the age because they were informed by the emancipatory concepts of that era of revolutions, notably the concept of rights.

The well-detailed characters of Hicky’s nemeses, Hastings and the missionary Johann Kiernander, too, stand out in three-dimensional detail.

The end of the book becomes a depicted courtroom drama set in Calcutta, as Hicky faces multiple counts of libel brought by Kiernander and Hastings; with periodic cut-aways to other spheres of action in tumultuous India and abroad. We are finally led towards the heart-rending end of Hicky’s life in poverty and ill-health.

Hicky’s legacy is complex. As the writer says, ‘While many of [Hicky’s] articles contained truth, they were often founded on rumour, and some points, especially his claims about Kiernander, remain unproven.’ And yet, ‘[Hicky] trained printers who would later transform Calcutta into one of the most vibrant literary cities in Asia…’

In summary, Otis says, ‘[Hicky] sacrificed everything to defend the freedom of the press: his ambitions, his person, and his paper.’ He ‘saw his mission to tell the truth: open to all parties, but influenced by none’.