News of a Killing 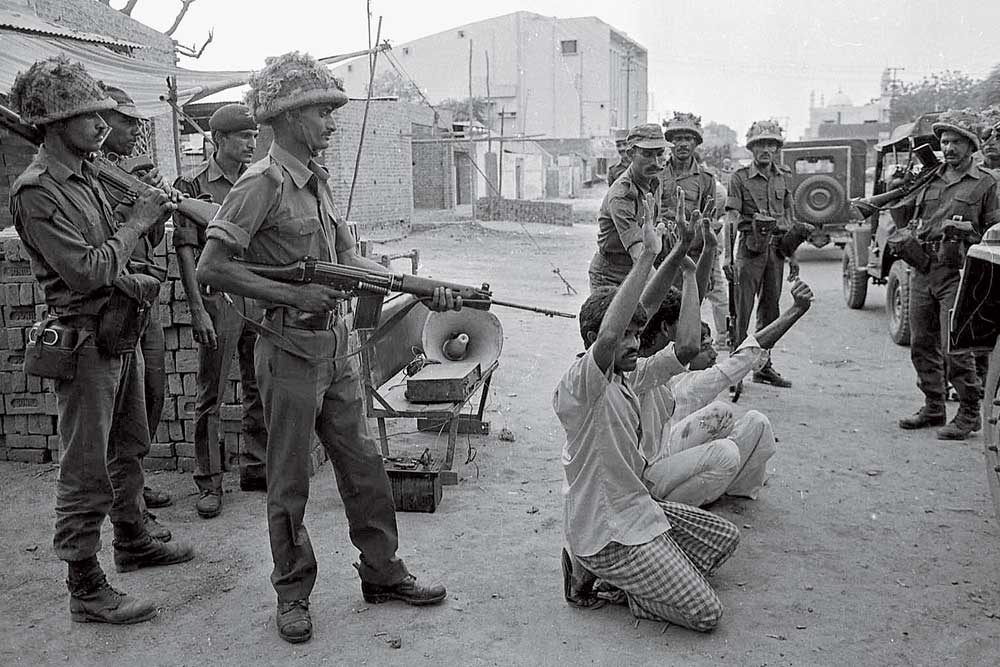 FIRST, THE FACTS as narrated in this chilling, courageous account. May 1987. Two months of riots rend Meerut apart. The Ram Janmabhoomi agitation is on the rise, the Hindutva demand for a temple at Ayodhya’s disputed site rousing a large section of North India’s upper- and middle-caste population. The year before, Rajiv Gandhi ordered the opening of the black seal of the Babri Masjid, angering conservative Muslims. Tension fills the air. Opinions are so polarised that antagonisms have seeped into the government, bureaucracy, constabulary: officers of Uttar Pradesh’s Provincial Armed Constabulary (PAC) attack and almost kill a Muslim officer when he tries to stop the harassment of Muslims in custody. In a separate incident, Muslim prisoners are killed in Fatehgarh jail by Hindu warders working alongside prisoners.

On 21 May 1987, Prabhat Kaushik, brother of Major Satish Chandra Kaushik, is killed while sleeping, by stray bullets that appear to come from a neighbouring Muslim mohalla, Abdul Wali. Prabhat and Satish are nephews of Shakuntala Sharma, a well-known BJP firebrand from Meerut.

On 22 May 1987, a truck carrying members of the PAC’s 41st battalion, led by Platoon Commander Surendra Pal Singh, arrives in Hashimpura, a Muslim locality of Meerut. Eyewitnesses report that the recently bereaved Major Kaushik was assisting the battalion, perhaps even directing operations. As a member of the Army, his presence at such a round-up is in contravention of constitutional law. The PAC squad assembles every Muslim male save the old and very young, 42 in all, and drives them away in the back of the truck. The men, and their families left behind, assume they’ve been arrested and taken to Meerut jail in connection with the recent rioting.

The PAC truck takes the Muslim men outside Meerut, to the outskirts of a village called Muradnagar. The detainees are told to step out one by one. As they emerge, they are in turn shot dead by members of the PAC. Men who retreat to the back of the carriage are carted out and then shot. Later, jawans begin to fire indiscriminately into the truck.

At this juncture, the headlights of a heavy vehicle coming down the road interrupt proceedings. PAC jawans rush to the vehicle, and threaten and assault the driver. They demand he reverse down the road without his headlights, which minutes before had spotlit this scene of mass murder like a theatrical stage.

Panicked, the jawans climb in and the PAC truck now returns to the highway, turning towards Ghaziabad. Soon the driver turns towards the village of Makanpur. The truck halts at a canal. Jawans climb into the truck, grab hold of a victim and throw him out the back. He is shot and his body thrown into the canal. After everyone has been thrown out and shot, the killers search through the ravines for survivors, pumping more bullets into those who stir or move.

Of the 42 men picked up from Hashimpura, three survived the first mass execution at Muradnagar. There were two survivors of the slaughter at Makanpur.

The events that night in the curfew- empty bylanes around Meerut must be told in grisly detail because in only 30 years, this horrifying massacre has receded until it barely figures in public memory. Yet, as the author of this book, Vibhuti Narain Rai, repeatedly points out, this is by far the biggest custodial killing in independent India, a serious, unforgivable failure of the state, wherein its own agents colluded to murder fellow citizens. Rai was Superintendent of Police of neighbouring Ghaziabad at the time. His passionate, well-constructed eyewitness account is a step towards filling the vast information gap that has arisen around Hashimpura, a veil of silence cast by the state and its investigating agencies that has prevented genuine public examination of that gruesome night.

Why this silence? Forget the rabble- rousers. What explains the silence of liberals? As a member of the BJP told me some years ago, when asked about Prime Minister Narendra Modi’s role in the 2002 Gujarat riots, “Why don’t you ask about Hashimpura? That was by Indian jawans. Only because Congress was in charge.”

Are Modi acolytes on Twitter right, then? Do liberals pay greater attention to communal conflagrations under the BJP than the Congress? The BJP man’s argument was, of course, designed to deflect criticism of Modi rather than bring attention to 1987. In any case, Hashimpura is better compared to AFSPA excesses in the Northeast and Kashmir, a bloody indicator of what happens when heavily armed organs of the state get drunk on their own impunity. Rai has an interesting explanation for the shield the PAC then enjoyed. When Congress chief minister Veer Bahadur Singh drives into Meerut, and the bureaucrats and policemen gather in the Circuit House, Rai suggests a raid on the PAC camp so the men can be arrested or at least the truck impounded before all the evidence is wiped away. Everyone is frightened by this step. It becomes clear why. Thirty PAC companies are currently deployed in Meerut. A PAC mutiny in 1973 over higher pay is fresh in everyone’s minds. Veiled threats are made: finding the men responsible might lead to even more disorder. And so you have it. Impunity.

We shy from staring too long at Hashimpura because it is clear the state and its functionaries have done so much to protect the perpetrators. Rai uses his policing expertise to detail precisely how the investigation was perverted. But there is another reason the killing of these young Muslims has been so comprehensively ignored. They belong to the faceless hinterland horde, another set amongst a vast number of low-caste people of every faith who have sacrificed their lives as India’s democracy has ‘bedded in’. The failure of liberals here is not of a Congress bias. It is a failure of empathy. To be poor and Muslim is a terrible circumstance if you want media attention. If comparisons with Gujarat must be made, better to ask yourself this: while Muslim neighbourhoods across the state burned, why is the massacre at Gulbarg Society, the only upper-middle-class neighbourhood attacked, now synonymous with the violence of 2002? When close to a thousand Muslims died, why do we only remember the name of Ehsan Jafri, a man of wealth and status, a former MP? The story of Jafri’s evermore-frantic phone calls as the mob approached—to the police, bureaucracy, the highest authorities, has become emblematic, a narration that haunts us, leaves us helpless. But what is it about this story that truly surprises us: is it that a Hindu mob attacked Muslims in this way? Or are we appalled that—in a country like India—a man of such connections could not save himself?

Rai writes with anger and empathy, chiselling into the record names and faces that have haunted him for 29 years. Amongst the first on the scene, he played a pivotal role in getting the Makanpur survivors to safety, eventually pushing them to seek justice—a journey that took them, via Syed Shahabuddin, to Subramanian Swamy. Funnily enough, these are the good guys. Rai writes with razor wit about the political luminaries he meets. They bumble through these pages, self-serving, indolent. Veer Bahadur Singh, LK Advani, P Chidambaram, then Home Minister, Rajiv Gandhi, who first displayed concern but later might’ve chosen victory in an upcoming state election over justice. Meerut’s Congress MP, Mohsina Kidwai, who refused any help to the survivors when they went to her bungalow in Lutyens’ Delhi, is given the laceration she evidently deserves.

Rai is very strong on the different ways Hindu and Muslim communities experience the police, especially during a riot. He is an old-school secularist, still believing in what India was supposed to stand for. When he writes about the verdict— in which the 16 surviving accused were acquitted—the desolation in his tone becomes evident. He is quite sure the investigation was willingly botched and that the real orchestrators were never brought to court, perhaps never even questioned. Rai gave his best years to the service of the Indian state. With each pointed change in testimony, each Armyman refusing summons, you sense his faith in the edifice leaching away.