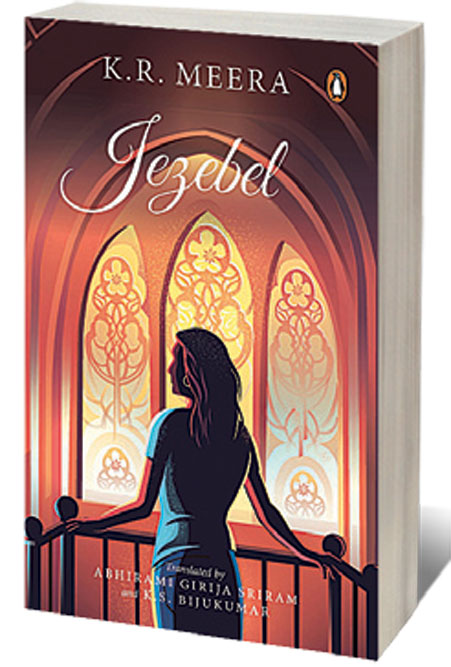 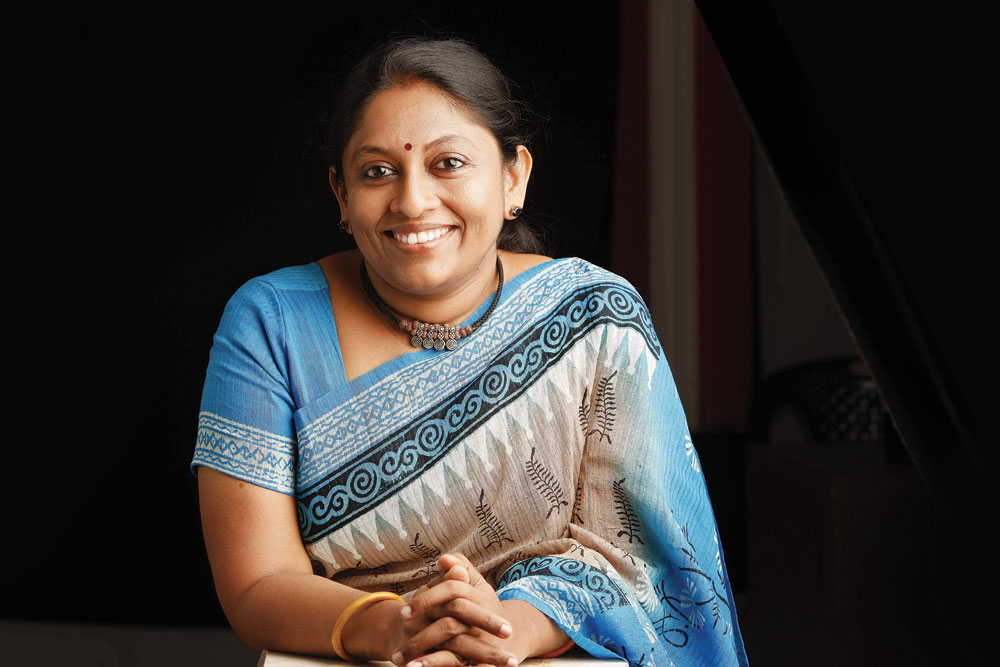 
ONE OF THE MOST commonly cited impacts of TV’s ongoing golden era is how screenwrit­ing techniques have found their way into the novelist’s playbook. Writers are competing not just with each other now; they’re compet­ing with Netflix (which itself is competing with sleep, as founder Reed Hastings famously said). Novels are not just shorter these days; they tend to have self-conscious ‘cutaway’ sections that, for example, explore the villain’s origin story or a chapter from the protagonist’s early childhood. There are cliff-hangers and ‘cold openings’ and Aaron Sorkin-esque ‘walk-and-talk’ scenes; novelists are desperate to make their books more entertaining for the lay reader.

In the world of Indian literature, the Malayalam writer KR Meera had figured out this puzzle long before the onset of the Net­flix era (and for what it’s worth, she has written for both TV and movies in the past). Her novels —Hangwoman (a Sahitya Aka­demi Award winner, 2012), The Gospel of Yudas (2016), The Poison of Love (2017) and several others — are high art, and among my favourites in contempo­rary literary fiction. But they are also blessed with the raw kinetic energy and irrepressible momentum we asso­ciate with the masters of genre fiction. Her latest novel, Jezebel (translated into English by Abhirami Girija Sriram and KS Bijukumar; Hamish Hamilton; 400 pages; ₹ 599), is arguably her strongest work yet — the eponymous protagonist is an embattled young woman, a doctor trapped in an abusive marriage. We begin the novel in media res, on a thrilling note: “As she stood in the family court, pelted with the blame of having paid a contract killer to murder her husband, Jezebel had this revelation: To endure extreme torture, imagine yourself as Christ on the cross.”

During a telephonic interview, Meera explains the circum­stances behind the writing of Jezebel. “The Malayalam title of the book was ‘Sooryane Aninja Oru Stree’ which can mean ‘woman clothed with the sun’ or ‘woman adorned with the sun’; a reference to the Book of Revelations, of which Jezebel is a part. The Malayalam word ‘aninja’ doesn’t have an exact counterpart in English.”

She adds: “This book [Jezebel] was inside my head for a long time and it was written after the completion of Aarachar (Hang­woman). I wanted to cover the various aspects of the lives of Malayali women and I wanted to base it on the women of the Bible. I am very familiar with the Bible and I have been reading it for a long time. I love the way they have translated the differ­ent Bibles (there are so many versions) into Malayalam.”

Jezebel also operates in a mode that KR Meera readers will be familiar with — a blend of mythology and historiography (after all, who gets to write histories is one of Meera’s pet subjects) with more traditional, dialogue-based action/plot progression. Other examples of this dual-front strategy are the short novels The Poison of Love and The Gospel of Yudas. In the former, the young, female protagonist Tulsi is an IIT graduate who falls for an incorrigible womaniser named Madhav (one of Lord Krishna’s many names); she ends up getting betrayed, shaves her head off and becomes a ‘Meera sadhu’ of Vrindavan. In The Gospel of Yudas, a former Naxalite named JU Das goes into exile out of shame after betraying the whereabouts of his colleagues—he takes on the name Yudas because it is a corruption of ‘Judas’.

These characters are seemingly predestined to follow the life trajectories of their mythological or historical forbears. ‘Seeming­ly’ because it is in this interplay of the literal and the mythological that Meera’s art soars. In the previous two books, too, the charac­ters had a degree of self-awareness about their names and what those names foretold. Whether they try to avoid this ‘foretold’ fate or embrace it, their connection with the ancient past is not limited to the coincidence of their names; it’s something much stronger, older and considerably more inscrutable. You can see a variation of this technique, for example, in the Scottish publisher Canongate’s Myth Series, where writers like Margaret Atwood and Ali Smith wrote novellas that ‘rewrote’ ancient myths from various cultures; Atwood’s The Penelopiad applies this treatment to The Odyssey while Smith’s Girl Meets Boy is a re-imagining of the story of Iphis from Ovid’s Metamorphoses.

Jezebel takes this game to a whole new level. Right from Jezebel’s childhood, her name is a sore point for Bible traditionalists and

the tipping point comes when her prospective father-in-law George declares that she will have to change her name if she wants to marry his son; thanks to religious and patriarchal propaganda ‘Jezebel’ is a pejorative often used for a false prophet or an immoral, adulterous or otherwise deceitful woman. When Jezebel tries to explain that the real Jezebel was actually a scholar and a learned woman, George mutters that this “wasn’t in any Bible I ever learned.”


I wanted to feature Christian characters and settings for this story because in popular culture you seldom get to see minority cultures, languages or traditions being represented, says KR Meera

Talking about the historiography of religious stories, Meera says: “From the Biblical times up until the contemporary era, men have twisted and manipulated women’s stories for their own purposes, and there is usually some political motiva­tion behind this process as well. The story of Jezebel is a great example of this. At the time I began to write Jezebel, the country was undergoing a political transformation from the centre towards the right, you can say. I wanted to feature Christian characters and settings for this story because in popular culture you seldom get to see minority cultures, languages or traditions being represented.”

The mythology-meets-sociology approach followed by Meera in The Poison of Love and The Gospel of Love sees its culmination in Jezebel. Again and again, we see the author ending a dramatic passage with a devastating last line that draws from the Bible. For example, look at this passage where Jezebel’s mother has just said something shockingly cruel to her and she’s looking at her father for support. “Jezebel looked at Chachan. Chachan was help­less. There were huge dark circles under his eyes. His voice had grown weary. His smile was full of pain. Chachan’s own life was a sacrifice laid at the altar of Ammachi’s inanities. ‘Each one bears his own cross,’ he whispered.” Or this one, where Jezebel looks at the medical charts of a person she has been asked to take care of at the hospital. “Jezebel examined her case sheet, trembling a little at the mention of ‘CA Breast Stage-4’. That day, Jezebel was baptized in tears by Anitha. She felt the heavens open and saw the spirit of God descend like a dove and alight on her.”

Not only is this beautiful writing, it’s also thematically perfect for this novel and shows off Meera’s versatility as a writer. She can be very, very funny when she wants to (the young Jezebel’s interactions with her maternal grandmother Susanna are a case in point) and the very next page, she could be summarising hundreds of years of oppression or bigotry with a few expertly chosen phrases. This effortless shift in register or tonality is what distinguishes a great writer from a merely good one. Just see how subtly and skilfully Meera introduces the idea that Jezebel’s life was something of a self-fulfilling prophecy—that her in-laws’ derision, especially around her name and its Biblical import, actually ends up driving Jezebel towards rebellion.

“There was a little girl inside her who refused to grow up, even as she herself had grown up, come of age and earned her degrees. A girl who loved the world in all her innocence, and lived with hope in truth and justice. It was that little girl that Jerome and the world had now crushed. They had robbed her of the ability to trust another person. In marriage, she had hoped for a friend and a lover; instead, what she had been granted was a master, and along with him, an overlord. Their words and actions were an onslaught on her self-esteem. She turned into a rebel.”

Jezebel’s husband Jerome (also a doctor) was thrilled at the fact of marrying ‘a Jezebel’ because he could objectify her as a whore (“Jezebel means whore”, he keeps repeating during their first night together) while still demanding the obedience expected of a wife. There is an element of hatred as well as attraction in this first-night scene; bigots are often attracted towards what they outwardly condemn as immoral.

Jezebel was inside my head for a long time. I wanted to cover the various aspects of the lives of Malayali women and I wanted to base it on the women of the bible, says KR Meera

Of course, even the best of writers are sometimes victims of their own process. The intensity and concentration one requires to place word after word after word takes a toll on the writer, mentally and physically. After Meera finished writing Hangwoman, she struggled with depression for a while. She started writing Jezebel in part because she felt starting a new project might improve her health.

Talking about this difficult phase in her life, Meera says, “After I finished writing Hangwoman, I experi­enced prolonged depression. It was a much longer novel than most of my previous works and it took a toll. For the first time I saw how painful writing could be. At the same time, I was also dealing with certain personal issues. My mother-in-law, who I was very close to, was diagnosed with cancer around the same time.” She adds, “I sought medical intervention and I was prescribed antidepressants. I read up on the chemical processes associated with the brain, I read up on serotonin. It was a strange time in my life. Even right now, I am feeling the effects of ‘post-writing’ blues after having finished another long novel that was released last year.”

Jezebel, then, was the-novel-as-therapy for its creator, in a way. For readers it is a massively entertaining novel that grabs you by the scruff of the neck. It rewards Meera’s fans through its connections to her past work while remaining a good entry point to her bibliography for new readers. As the farcical trial continues and we learn more about what actually happened between Jezebel and Jerome (as well as further details from Jezebel’s early years), the ‘mythological mode’ becomes more dominant, until just about every paragraph appears portentous and the narrative tension rises to unbearable levels.

Jezebel represents one of India’s finest writers in top form, and readers across the country should be excited.