A Pill in Time

If you don’t take your medicines, they won’t work 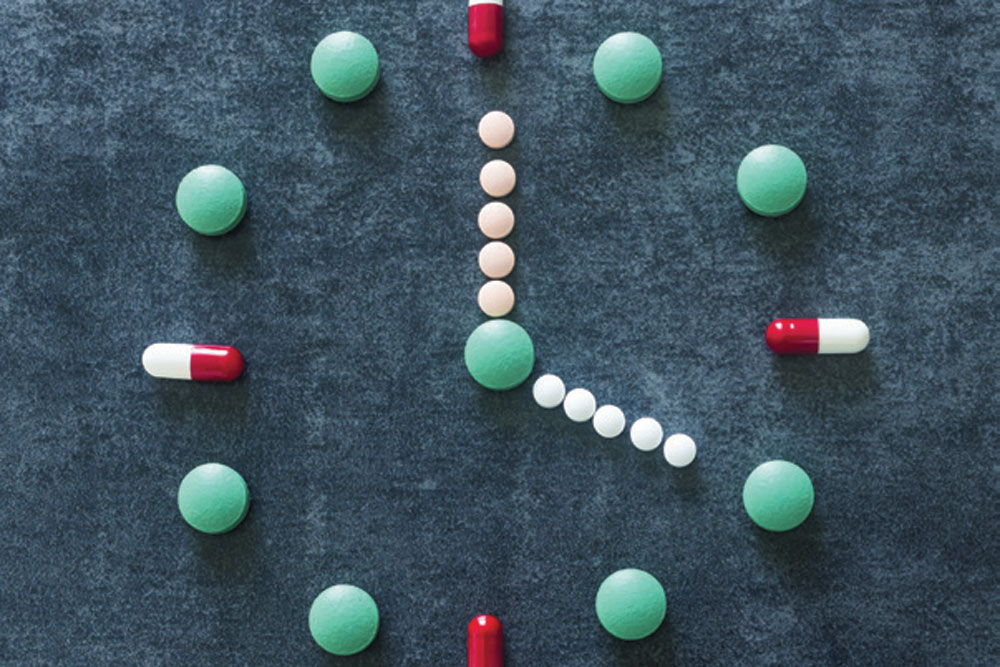 MY DAD’S SUGAR is never controlled,” said the young woman sitting across the table, about her 70-year-old father. “No doctor has ever been able to fix his diabetes. I have gone from doctor to doctor in this city, but they have all given up.” As I prepared myself to face this challenge, I scanned her father’s prescription carefully. It seemed to be in order. His diet, she added, was perfect. What was the reason, then, for the failure of treatment? I suggested the obvious: insulin shots. The moment I mentioned it, the patient’s expression changed: “Give me one more chance with oral medicines. Actually, I miss them about half the time!” A verbal duel ensued between the daughter and father as I watched in amusement.

It is rare to see patients who are taking their medicines regularly. It is estimated that in developed countries, only half the patients being treated for chronic conditions are compliant with medication beyond two years. According to the WHO, failure to take medicines is one of the major reasons for poor control of diabetes, blood pressure and cholesterol. About 20 per cent of patients don’t even start the prescribed medication.

Why do patients fail to take their pills? First, it could simply be forgetfulness; think of the elderly, or the super-busy urbanite. Second, it could be lack of awareness about the importance of continuing medication. For example, many believe that BP medications can be stopped once BP has been normalised, and diabetes medicines can be discontinued once blood sugar is normal, a practice that can be dangerous. Third, the medication may be low down on a list of priorities. After all, in most cases, the patient does not have any symptoms and is taking treatment for a disease only because his doctor says he should. Day-to-day, the patient is actually worried about his daughter’s wedding or job or loan repayment, not his health. Fourth, patients suffering from chronic disease tend to get depressed at the thought of a lifelong condition, and discontinue medicines intermittently in a fit of frustration or mood of rebellion. Fifth, many patients omit doses deliberately as they feel they don’t really need them and are being overtreated.

There could be medication related issues too. Experience of a low blood sugar reaction can lead a patient to give up his diabetes medication, often forever. Giddiness on standing up following a BP medication may be enough to scare the patient off. Use of multiple agents involving complex directions (fasting, before food, after food, bedtime) can be big deterrent to compliance. A real or perceived lack of efficacy is another important reason for quitting medication. The patient may not realise that the response may take time, or that the medication dose needs adjustment. Quite often, poor compliance is also linked to lack of communication. If the patient has not understood the benefits that accrue from the medicine, he is likely to give it up at some point. In treatment of chronic disease, medicines often do not provide symptomatic benefit. In the 2008 DESMOND study on British people with new-onset type 2 diabetes, only 64 per cent believed that this was a lifelong condition, while only 22 per cent believed that the diabetes would affect their health, and 9 per cent thought that diabetes would shorten their lives. In such a scenario, how can one expect people to be serious about taking treatment?

One major factor in patients turning non-compliant is the difference in understanding of the disease between patients and their doctors. So while the doctor is delighted to see perfect blood sugar and cholesterol values and certifies the patient as ‘well controlled’, the patient may be worried about his daily battle with headaches or some other unrelated condition. He really doesn’t care about his sugar values because they are not impacting his daily life. Attending to the patient as a whole, and addressing complaints that may seem minor, brings relief to patients, builds faith and improves compliance with long-term medication.

Several techniques have been used to improve compliance. Increased patient education and support remain the most effective. Simplifying treatment regimens and the scientific use of fixed- dose combinations reduces pill load and improves compliance. Use of modern technology, such as SMS reminders, has proven to be very useful. Home delivery of medication, and the ‘pill box’ approach—every pill dispensation being recorded in a centralised server—is the way forward.

It’s good to always remember the basics: “If you don’t take your medicines, they won’t work!”