In Black, Red and Green

The war-torn nation’s hopes, fears and nightmares before a national election 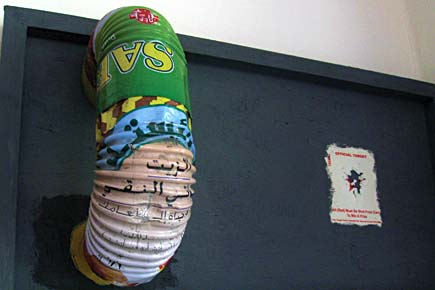 A war-torn Afghanistan’s hopes, fears and nightmares before a national election.


On 20 August, Afghanistan will vote in a new President. And also a new provincial government. An election in the time of war. Democracy amid the Taliban. And riding on it, the hopes of not just 17 million Afghan voters, but also the entire world. Hopes that a new government will bring peace. Stability. And the end of terror. Here’s a look at all the colours and contradictions in a country the world sees as the fount of chaos.

That’s the only colour to describe Shinkai Karokhel. Despite her warm smile and colours on her clothes and brightly-coloured room. Because in Afghanistan, women still live in the dark ages. And being a woman Member of Parliament has cost this woman everything. Her family. Her marriage. Even the assurance of her life, threats to which are made nauseatingly often. To anyone outside this bizarre political set-up, which Shinkai and other women MPs have openly acknowledged is a parliament of warlords, looms the question: what’s the point of sticking your neck out? What’s the struggle about? Doesn’t power lie elsewhere? Outside the legal system? With grenades and rockets and anti-aircraft missiles?

The first thing Shinkai did was correct so much of the dismissiveness with which we cynical outsiders treat the Rule of Law in Afghanistan. She reminded me of what it took to change all of that, piece by infinitesimal piece, for women around the world. Here in Afghanistan, Shinkai, along with 67 other women MPs, are starting again from zero.

To re-invent the wheel, you have to change the law. So Shinkai stood for elections. As a woman scorned. Her husband had already left her for another woman. She says, her eyes now brimming over, “He told my kids, ‘She’s a selfish woman… and (in becoming an MP) she’s putting everyone’s life at risk.’”Then, in Parliament, Shinkai says she fought tooth and nail to make amendments to the Shia family law. “When I was defending the case of Shia family

law, one man with a big beard who called himself a commander, was insisting that a nine-year-old girl can marry.”

In opposing child marriage, Shinkai had to face the insults of this fellow MP on the floor of the House. Among his barbs—“Your husband was right to marry another woman because you fight so much… you are already a neglected woman.” Anonymous death threats followed, via SMS. All for opposing laws drawn from religion.

In the end, the law was amended. A proud smile returned to Shinkai’s face.

She’s a radical. A feminist amongst warlords. But then, in Afghanistan, every colour is tinged with shades of the other. Nothing is entirely what it seems. I’d been rolling this interview on camera until now. But off camera, I ask Shinkai out of curiosity, “What happens to a woman here when she gets raped?”

“Depends on the region you come from,” she replies, “In the north, people are more savage. Warlords rape women and there is no safety. In the south, Kandahar etcetera, that’s not the case. Pashtuns respect women more. Pashtun women don’t get raped.”

“Really?” I say, incredulously, “But the Taliban are Pashtun and women have been brutalised…”

“Yes , yes,” Shinkai interrupts. “Forced marriages were there, I admit. But by that standard, 90 per cent of Afghan women are raped—in their marriages.”

Once the shock of these comments wore off, I realised I was talking to a woman who was Pashtun and tribal. Imagine the distance she’s travelled to get where she now is. These comments do not take anything away from the awe-inspiring struggle Shinkai represents. In fact, they add to it. To take the black colour that she’s been born into, and defiantly colour it red.

At the opposite end of the spectrum from Shinkai, and in the same city, Kabul, is an Afghan-American resistance artist. And anthropologist. Aman Mojadidi. Tattooed arms. Long beard. Atheist. Surrealist. And now busy setting up his next exhibition.

Part of him is here to see what he can do to change the reality in Afghanistan. He moved here from America after it was supposedly freed of the Taliban. In 2003.

“I thought I could really do some development work here that could actually make a change.” He works with an NGO called Turquoise Mountain. It has been reviving traditional arts and crafts. To provide the Afghan gen next a way to earn a living. Through neither arms nor drugs.

Six years on, part of Aman is also fed up. With fighting the system. Living in fear. And the toll that living this strange, boxed-in life in Kabul takes on him. Magically, it all comes out here. On these walls.

“The idea of it I suppose,” he says, stroking his beard pensively with his tattooed arm, “is to take from the violence and conflict that’s been experienced, and turn it into something a bit more palatable.”

In all of these bizarre, super surreal, supremely funny images, I take away a happy-funny feeling. Like Alice in Wonderland. Not a world shattered. But a world of possibilities. Aman’s way of showing life and humour in the face of death and despair. Hope.

Hope is also what Tariq Sediq, 30, sits on. He is a senior parliamentary advisor. His family left after the Soviet invasion. He grew up in Peshawar, Pakistan. And then Egypt. And came back to Kabul in 2003.

Tariq calls the Parliament his baby. Because as an expert in law and politics, he was instrumental in setting it up. And now his work has, strangely enough, labelled this man, a believer and patriot, a kaafir. An infidel. So says the Taliban. Hanging over his green halo of hope is also the shadow of death. Threats rattled him so much that he had a minor heart attack last year. He had to leave his lovely villa with gardens and an open sky to live in a boarded up house with 24-hour security and constant fear—for himself, for his wife and kids.

All because he believed in change, and decided to take 12 warlord MPs with him to Northern Ireland to study how it achieved peace. Also, his father is a believer—in Afghanistan achieving peace. He was the head of the Peace and Reconciliation Commission to bring moderate Taliban members into the government. He brought 2,000 such members around. Now Tariq has to pay for his and his father’s ‘sins’.

“Since 2008,” he tells me, looking into the distance, “I’m more scared than ever before. Because my job in the Parliament is a USAID-funded project. I have the American flag looming over my head.” It feels awfully unsafe.

It sums up not just his own, but perhaps the fears, aspirations and nightmares of a large part of Afghanistan. Of those who must fortify their existence, glad to be survivors, even if there are no women on the streets. No children out playing. No sound of laughter.

“The Taliban has succeeded in one thing,” Tariq says glumly. “They’ve made Afghans mistrust Afghans.”

In this election then, where fear looms so large, what does Tariq really hope for?

Take his child for a drive. Go to a restaurant with his family for dinner. Or, to the cinema.

For now, though, Tariq’s own actions to usher in peace have left him fighting himself. Making him sometimes question his faith and optimism. Did he return to Afghanistan for this? But then, he is a man of faith. And so far, the colour green still shines through.