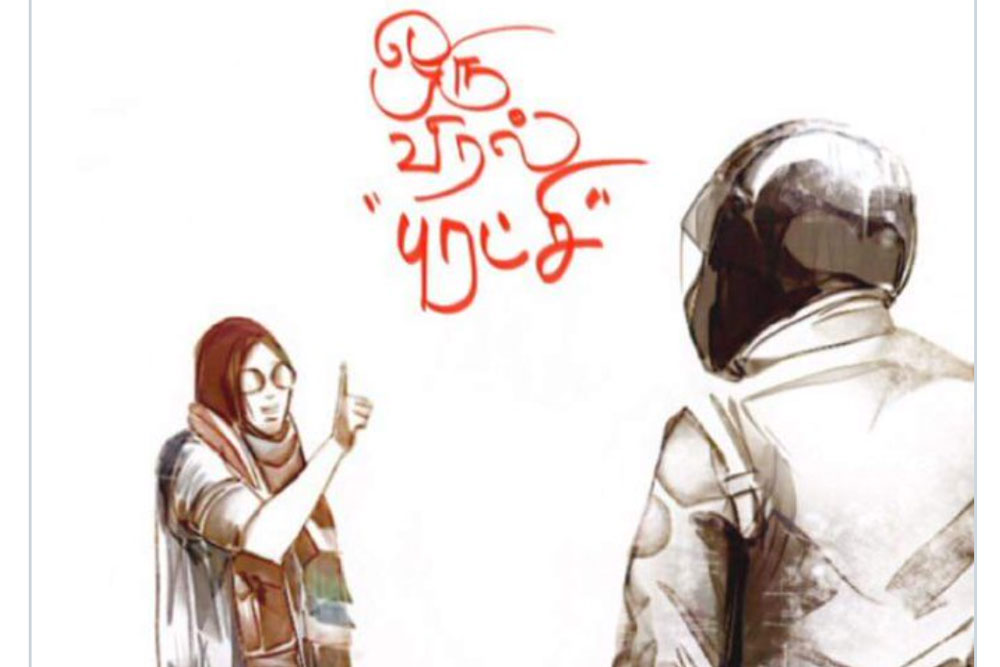 
On the afternoon of December 15, when Aysha Renna and her university buddies decided to join the march organised by students and locals near Jamia Millia Islamia (JMI), Delhi, to protest the new Citizenship law, little did she realise that she would shortly be catapulted to national fame for her defiance and courage in the face of a brutal attack on a friend by lathi-wielding policemen. When Delhi Police personnel dragged out one of her male friends who was part of the march, later identified as journalist Shaheen Abdulla, onto the road and started beating him, she displayed tremendous willpower in fending him from being thrashed as he lay on the ground. Renna and another student Ladeeda Farzana offered a protective cover for Abdulla – and was ready to take blows from angry policemen and who, however, did not arrest him.

The visuals of her holding up a finger to the group of policemen and another man dressed in a red sweater and jeans topped with a jacket and cap remarkably like the Delhi Police uniform went viral and gave birth to an illustration by actor-director Ponvannan that was printed and used in simultaneous student protests around India the same day, with the caption, “One-finger revolution”.

Maktoob Media said Abdulla, its Associate Creative Editor, and a student of journalism at JMI, wore a press card. He is the director of a documentary on the NRC issue in Assam, titled In A State of Doubt. Renna said he was targeted by the police because he was the only male member in their group. He had not thrown stones, she said, and had only been trying to help the injured.


Renna and her team were far behind and did not know what had happened between a section in the front rows of the protesters and the policemen. They had to run for cover and got into a residential driveway when they saw protesters retreating in panic as police chased them away. “We don’t know what had happened but I can vouch for the fact that students were not involved in any violence. We were also trying to help the injured for a while,” says Renna, a 22-year-old second-year BA student at JMI. An alumnus of Farook College in Kozhikode, northern Kerala, she had done her BA in English before she cracked the JMI entrance test. “I always wanted to study in Delhi. Which was why I diligently worked towards getting admission here,” she told Open.

Contrary to a general perception, she was not involved in any student politics earlier. “I was never very sure about my political convictions… This time I wanted people from far and wide to hear our voices,” says Renna, who hails from Kondotti, Malappuram district of Kerala, commenting on her support for the student agitation. Farzana and Renna, who were at the forefront of the anti-Citizenship law protests and were photographed widely on other occasions as well, including the late-night protest on December 15 at the Police Headquarters in ITO, Delhi, were lapped up as brave women faces of the agitation by a section of the media while they were vilified by others. A website even dug up an earlier Facebook post from 2015 to term her an “anti-national” for her comments on Yakub Memon’s execution.

On social media, they became overnight icons and whipping girls alike. They attracted appreciation for moral courage and feminine symbols of the anti-government protests. Renna, meanwhile, also came under sharp attack on social media for wearing a hijab, which, many consider, is symbolic of suppression of women who are conditioned to follow certain anti-women religious practices. The attacks on Renna came a day after Prime Minister Narendra Modi said one could identify miscreants who were protesting against the Citizenship law simply by looking at their clothes, a reference that many have taken as an anti-Muslim taunt.

To Open, Renna said she would not hesitate to hit the streets again in protest against the Citizenship law that she believes is unjust.

After a night-long raid a day later, the police arrested 10 persons for the violence and arson near Jamia, none of whom are students. They are currently tracking WhatsApp groups for suspects who instigated the violence, they said.

Who is an Indian?
How Democratic Processes Damage Citizenship Rights
Why Dhaka is Upset with Delhi