In politics, it is a rare moment of restoration. There comes a time when it takes the absolute submission of an individual to his own calling, defying the cosy assumptions of his time and tribe, to redeem the world he inhabits 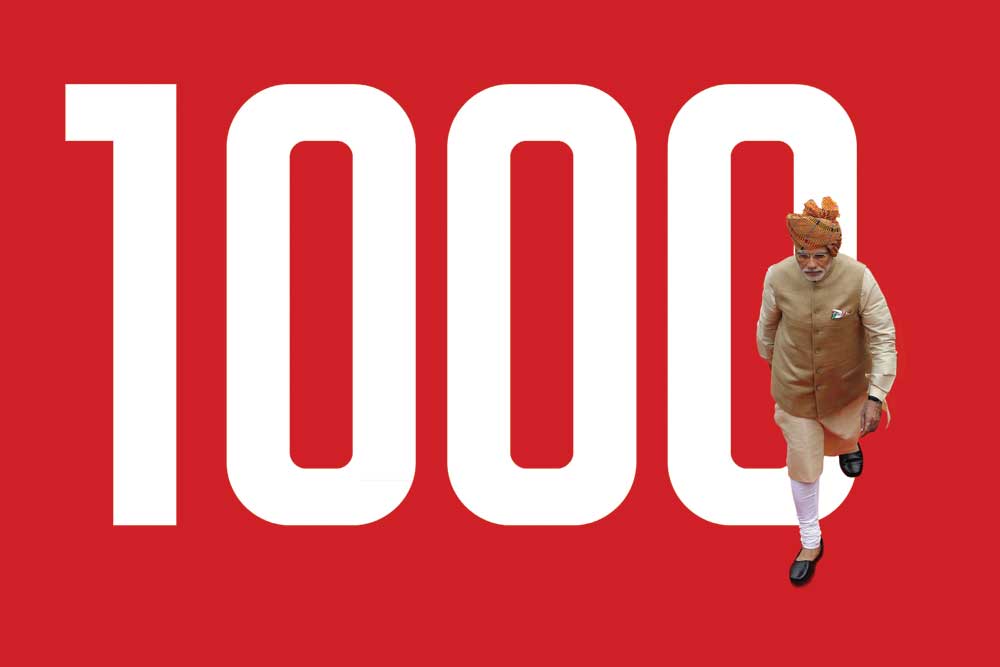 POLITICS WAS A rogue’s deal, or, at the other extreme, a hologram’s last flicker. It was a time when, even as the impatience of a people peaked, power became an enterprise without a moral content. In a country scarred by the worst adventures of ideology and the temptations of absolutism, this was a period of degeneration without drama. India’s oldest political tradition, its historical memories of struggle and idealism clouded by the desperations of a dynasty in decline, was fast retreating into irrelevance. The leader could not see beyond his own shrinking shadow as the system he presided over became corrupt and inept. It was in this space abandoned by one of democracy’s most immoral regimes that Narendra Modi happened three years ago.

Change was inevitable but the kind of change India was about to witness was more ethical than ideological. Modi came to Delhi after a campaign that was perhaps the longest and the loneliest in the political history of India. And in his backstory merged the prejudices of secular fundamentalism and the exaggerations of Hindu nationalism, the legacy of able administration and the liberating possibilities of power. His was the only story about the truth of national rapture: it is biographies that make the big difference. Modi’s was one that cexcluded patronage and privilege. It was an ascetic’s unwavering focus on the path to power, and he would travel alone and make himself inevitable to the party establishment—and to India eventually.

Three years on, his India is not a sovereign Hindu republic of the East, even though the street fighters of the cultural right may fantasise about one. True, the fringe fanaticism of political Hinduism thrives in mythological glories and civilisational grievances, and it continues to make enough noise to keep alarmists and doomsayers from the other side busy. As history shifts, the sense of empowerment the peripheral base feels is natural, though there is no denying the fact that it is vulgar, and even dangerous. It is equally vulgar when liberal intolerance uses the fringe show to create a republic of fear that appeals to that never-ever-Modi constituency whose conscience is made of bits and parts collected from the last ruins of ideology.

What lies beyond liberal alarmism and illiberal religiosity is an India shedding its accumulated dirt of the past. A new ethical order in governance is emerging, and the conviction with which one man is overseeing it may unsettle some. The comforts of certainties are vanishing, for this Prime Minister is serious about a cultural restructuring of the system, a repudiation of the entitlement regime. This shift in values is steady and methodical, and one reason it is not getting the attention it deserves is our preoccupation with misplaced arguments about identities and cultural ideals.

Why is it that, in three years, which is a long time in Indian politics, we haven’t had the luxury of enjoying a corruption scandal? Why is it that we have now come to take the prevailing sense of purpose in administration for granted? Why is it that, even as hierarchies collapse, we have not noticed a new sense of participation from the underclass? To restore the idea of equality in a democracy as chaotic as India, you don’t have to be a socialist or a benevolent dictator. Call it ethical perestroika, and only a leader swayed by his own destiny can listen to the demands of history with such focus.

This severance of faith in one’s own integrity can at times be frightening, but Modi has never breached the institutions or the basic decencies of a democracy, a familiar route taken by Indira Gandhi, the other purposeful leader who was larger than the office she held. Modi has only enhanced our much-abused institutions even as he played out his biography and philosophy—always without any external prop. The text of the singular leader abhors context, but the cult is not extra-constitutional. It shows how popularity rewards, not stifles, democracy. At a time when populists elsewhere make democracy a narcissist’s last refuge, India indulges the original outsider. It has forged a covenant with him, much to the incomprehension of the harrumphing class. In three years it has become deeper. And the deep state, so powerful before 2014, is dead.

In politics, it is a rare moment of restoration. There comes a time when it takes the absolute submission of an individual to his own calling, defying the cosy assumptions of his time and tribe, to redeem the world he inhabits. For Modi, politics is about being himself, and it makes no demands on him in terms of wealth, family, or relationship. He sees himself as the ideal you, and in every speech, it is the invocation of this liberating self-image that makes him closer to the India in tatters. It is this identification of himself with the dispossessed other that allows him to make the best of an ill-planned deal such as demonetisation.

In the moral universe of Modi, one of democracy’s biggest political constituencies, the retelling of one man’s story is the only bestseller. Out there, they still think the sea will part for him.