1000 Days of Modi: Banking On the Personal Sector

The next two years will witness a new partnership of prosperity 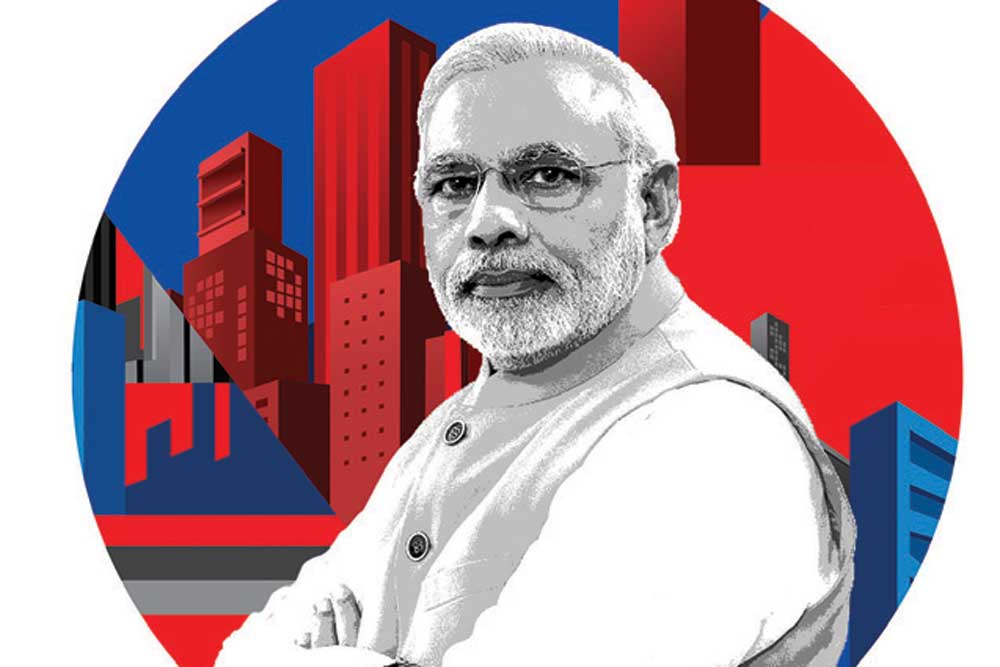 ACCORDING TO CONVENTIONAL wisdom, the first three years of a government’s five-year term are the time for radical policy changes, particularly of the kind which may not have a mass constituency in the short term but are necessary in the interest of long-term transformation. The last two years are usually earmarked for popular and populist announcements. Prime Minister Narendra Modi abides rarely by either conventional wisdom or pre-written scripts. After all, circa May 2014, who would have predicted that demonetisation would be the most radical (at least in the ‘big bang’ sense) policy measure of the first three years? Equally, therefore, it is difficult to hazard a prediction on what may become the policy showpiece of the two years leading up to May 2019.

What is most likely is that the remaining two years of Modi’s tenure will be very much like the first three because, in India, the process of reform and transformation isn’t about a big bang or two, but a steady workman-like approach to changing a dysfunctional policy ecosystem. In fact, in two years from now, Modi may be close to untying the Gordian Knot of India’s chronic under-performance by bringing clarity and credibility to the muddled thinking on the relative roles of the state and capitalism/free markets in the country’s economic development.

There are some good reasons and some bad reasons for India’s mixed-up economy. In 1947, it wasn’t unreasonable for the founding fathers to lean toward a greater role for the state in the economy. Until then, free markets were a symbol of exploitative colonialism and a country ravaged by two centuries of colonialism had limited resources and capacity for the private sector to take the lead. Things went horribly wrong in the 1960s when India took a sharp left turn towards autarky and ever greater state control over the economy just as the future Tiger Economies of East Asia were opening up. It’s never too late to make a decisive change as China showed in the years after it opened up to free markets in 1978. Unfortunately, India’s liberalisation in 1991 was borne out of necessity and not conviction. While some parts of the economy were freed up between 1991 and 1996 and then between 1998 and 2004, too many areas of the economy were still controlled or dominated by an unreformed state apparatus. What India got was an unparalleled (by domestic standards) boom in growth rates between 2003 and 2012 accompanied by a virulent strain of crony capitalism which threatened to destroy the legitimacy of free markets and, therefore, erode even the limited foundation India had for prosperity.

When Prime Minister Narendra Modi took office in 2014, India’s growth rate had slipped to distinctly pre-liberalisation levels of the sub-5 per cent kind. There was a crisis within the mighty Government apparatus characterised internally by policy paralysis, indecision and deep uncertainty and outwardly by rampant scams and spiralling inflation. And there was a crisis in markets, with public perception of India’s capitalists and businessmen at a low not seen since the peak of statism.

For the India story to regain its lustre, it will need extraordinary leadership to first pull it out of the morass and then to relay the foundation for a sustainable, rapid growth into the future

For the India story to regain its lustre, it would need extraordinary leadership to first pull out of the morass and then, second, to relay the foundation for a sustainable, rapid growth into the future. Prime Minister Modi embodied a unique set of qualities and qualifications which would enable him to set the stage for India’s turnaround. At a personal level, his rise to the top was based on merit and hard work, and not nepotism and dynastic succession characteristic of many of the politicians who had presided over grinding India to a halt. His reputation for probity and personal integrity made him stand out in a political class which had long used politics as a means of self-enrichment and enrichment of cronies.

His personal qualities were supplemented by his professional accomplishments. He had spent 12 years in office as Chief Minister of Gujarat, a period in which the state recorded China- like double digit growth rates and not just in industry where it always had a comparative advantage but also in agriculture where it quite clearly did not. Underlying the phenomenal economic performance of Gujarat was a philosophy or a mode of governance, which he would use in New Delhi. There was nothing muddled or mixed up about it. The state had a clear role; in building state-of-the-art infrastructure and investing in the poor (not via doles or careless populism). Free markets and entrepreneurship had a clear role whether in building industry or farming more productively. The interface between the state and markets, that troublesome swamp of rent-seeking and corruption, was cleaned up by ushering in greater transparency, particularly through the use of the most modern technology available. Every successful economy has to find the right mix of the state and markets to prosper. The Gujarat model had created a Guangdong in Western India under the overarching policy framework set by the Union Government which was identical for all of India. It differentiated itself by showing impressive state capacity (for implementation), unleashing and encouraging entrepreneurship and using the policy autonomy granted to the states of India under the constitution to create a better policy environment for double digit growth.

The combined power of Modi’s personal stature and his accomplishments and clarity as an administrator accompanied him into Prime Ministerial office in May 2014. Modi’s unique attributes and their translation into governance defined his first three years in office as they will define his next two years. No doubt, if he wins a second term, the track towards transformation will not change. Young India is impatient for rapid change, and that is a good thing, but transformations take a while to materialise once the foundation is put in place. Remember, that even China took at least ten to fifteen years after the 1978 reforms, just as the fruits of the reforms between 1991 and 1996 and 1998 and 2004 flowered in the years that followed.

Modi’s unique attributes and their translation into governance defined his first three years in office as they will define his next two years. If he wins a second term, the track towards transformation will not change

Consider how the foundation has been shaped. First, the role of the Government. At the core of the commitment to minimum government is fiscal responsibility and a stable macroeconomic environment characterised by low and stable inflation. Also at the core of righting the role of the state is the promise to improve India’s ranking in the World Bank’s Ease of Doing Business survey from around 130 to 50. Getting here requires getting the bureaucracy out of areas it has unnecessarily waded into over the years. At the same time, there is a commitment to maximum governance which means that the Government must do more efficiently and transparently its work in building critical infrastructure, whether physical or social. It must also carry out its core functions of maintaining law and order and defence in an efficient manner. For these areas, there is no compromise on spending where necessary. There has been an unequivocal move to reduce discretion on the part of Government officials wherever possible through the use of technology or superior management methods. It isn’t possible to wish the state away in India but it is possible to reorient its role. That is happening, most noticeably in the Government’s fight against poverty. The flagship schemes of Modi’s Government are designed for investing in the poor and not giving doles. Hence, the three schemes for subsidised insurance (life, accident and crop failure). The Ujjwala scheme has empowered the poorest households to use LPG instead of health-destroying fuels and cooking methods. Modi has even managed to persuade crores of middle-class Indians to give up their undeserved subsidy for LPG voluntarily. Even an old scheme like MGNREGA has been reoriented to the building of productive assets so that the money spent yields genuine returns.

Importantly, building from his experience as chief minister, Modi views state governments as partners rather than supplicants in the development process. Constitutionally, several subjects are in the domain of states and so no transformation is possible in the absence of serious reform by the states.

In the environment of 2014, it would have been tempting for any politician to create a backlash against markets and capitalists. However, Modi chose a different path. He gave no ground on crony capitalism. The disruptive demonetisation exercise was a strong message to crony capitalists, tax evaders and other sundry individuals who refused to do business by the rules of the game. At the same time, renegotiating bilateral tax treaties with foreign countries was a way to ensure that black money is not stashed abroad easily. The war on black money and illegitimate capitalism will continue but not at the cost of genuine entrepreneurship. Hence, policies like Make in India, Startup India and Standup India, easing of FDI norms across sector to facilitate new and existing entrepreneurs. The Prime Minister is acutely aware that the creation of jobs on the scale required by the workforce will only happen by the flourishing of entrepreneurship. The implementation of the Goods and Services Tax is also a pro-market measure which will ease many of the obstacles faced by businesses (including abolishing the notorious octroi) while bringing benefits to consumers and the Government in the form of greater tax revenues.

It is Prime Minister Modi’s ability to create a conducive ecosystem for economic growth and a win-win scenario for all key stakeholders that will eventually define his leadership of India. In fact, he has treaded into turf beyond just the public (state) and private (market) to facilitate change. Unusually for an Indian leader, he has exhorted society or the ‘personal’ sector to play its role in the transformation of India. He has shown us the mirror with Swachh Bharat and demonetisation. The reality is that if India is to transform, the Government must reform, the private sector must clean up its act and individuals must begin to be responsible and do their duties (by not littering or by paying taxes, to take just two examples). By 2019, this unique public-private-personal partnership would have put India on the cusp of transformation from the verge of despair in 2014. By 2022 or 2024, the seeds of change will begin to flower into the fruits of prosperity.