Modi should not waste his time on the UN 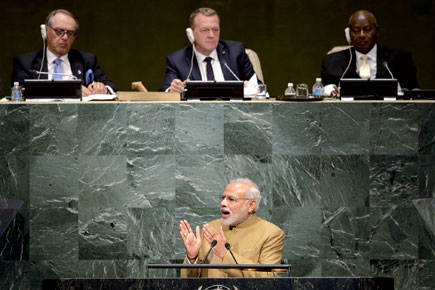 Even as Prime Minister Narendra Modi was busy selling India like a master salesman in the US this past week, he found time to host a G-4 summit with the leaders of Brazil, Germany and Japan. These are the four countries that have taken the lead in pressing for reforms of the United Nations Security Council. This summit was the first since 2004 and brought together Modi, German Chancellor Angela Merkel, Brazilian President Dilma Rousseff and Japanese Prime Minister Shinzo Abe. At the summit, Modi underscored the rationale that the UN Security Council “must include the world’s largest democracies, major locomotives of the global economy, and voices from all the major continents” to carry “greater credibility and legitimacy.” He said the four are ready to assume global responsibilities as he pressed for change, adding the world body reflects the mindset of a century “we left behind” and is not in tune with “new concerns” like terror and climate change. Having the four states as permanent members of the Council, Modi argued, would make it more representative and effective in addressing the challenges of the 21st century. In their joint statement too, the G-4 leaders stressed that ‘a more representative, legitimate and effective Security Council is needed more than ever to address the global conflicts and crises, which had spiralled in recent years.’ They emphasised that the process underway at the UN to bring about reforms of its Security Council should be conducted, given its urgency, within a fixed timeframe.

The G-4 made it clear that they want the reforms to take place this year itself. And from the way Modi has been canvassing the support of countries big and small for UN reforms, he seems serious about investing significant political capital in the issue. Yet, the reality remains that UN reforms will not be easy to come by. From the UPA to the NDA, Indian political elites remain obsessed with the UN. Even as the UN’s failures have become self-evident over the years, India has continued to view it as an almost indispensable actor in global politics that needs substantial diplomatic investment. While this fascination with a moribund institution may not have had any cost in the past when the country was on the periphery of global politics, a rising India of today cannot afford to cling on to that old worldview. India, however, continues to expend precious diplomatic capital on pursuing permanent membership of the Security Council.

India’s experience with the UN has historically been underwhelming, to put it mildly. Indian national interests have suffered whenever the nation has looked to the UN for support. As Nehruvian idealism has gradually been replaced by a more confident assertion of Indian national interests, it is time for India to dissociate itself more forcefully from the perfunctory modalities of the UN.

A UN fixation is not good for any nation, much less for a rising power like India. Indian interests today are global and ever-expanding, and the Government should have the self-confidence to declare that these will be protected and enhanced, irrespective of the priorities of external actors. The Indian Government is the only legitimate constitutional authority to decide when and how to use its instruments of power. And by and large, there is only one criterion that it should use: the preservation of vital Indian interests.

The UN is an international organisation that was established in the aftermath of World War II and so reflects the distribution of power in that era. The Security Council, where the UN’s real power lies, has five permanent members with veto powers that use the organisation to further their own interests. The General Assembly remains a mere talking shop. The current state of affairs in the UN has become so pathetic that apart from some of its technical bodies, the rest of the organisation is seen as a farce. The UN Human Rights Council, for example, has had members with stellar human rights credentials like Sudan, China and Saudi Arabia. No wonder Vaclav Havel called it a ‘Table for Tyrants’.

Why should India take such an organisation seriously and make it “a platform for establishing India’s place in the world,” as Shashi Tharoor once suggested? More importantly, why should it give the UN a veto over its vital national interests? The most important issue in this context involves decisions on where and when to deploy military assets. So far, Indian policymakers have been playing safe by deploying military contingents overseas only as part of UN missions. This was perhaps tenable when Indian interests were limited in scope. Today, such a policy does not hold water. More significantly, it gives the Government a shield from allegations of abdication of its responsibility to protect Indian interests.

When India decided to send its naval warships to the Gulf of Aden in 2008, one had hoped that India’s political and military leadership would finally be forced to evolve a coherent policy for the use of force in securing Indian economic and strategic interests. But it remains unclear under what conditions India would be willing to use force in defending its interests. This question needs immediate answers, and the nation’s civilian and military leaderships have let the nation down by not articulating a vision for the use of Indian military assets. Some suggestions have been made, but they verge on being facile. For example, ruling out the sending of troops to Afghanistan, the then Indian Army Chief had suggested that “India [take] part only in UN approved or sanctioned military operations,” adding that, “The UN has not mandated this action in Afghanistan, so there is no question of India participating in it.”

India’s leadership still gives the impression that the role it sees for the country in global security is not shaped by its own assessment of its interests and values, but by the judgments of global institutions like the UN. No major power takes UN Peacekeeping Operations seriously. Yet India continues to be among the largest contributors to these contingents, having sent nearly 180,000 peacekeepers on 44 missions over the years. Indian forces working for the UN have suffered more casualties than any other nation. Indian policymakers argue that this is being done not for any strategic gain, but in the service of global ideals: for ‘strengthening the world-body, and international peace and security.’ Why should global peace and security be a priority for the Indian Government which has internal security challenges of its own to tackle?

There was always a calculation that being a leader of UN peacekeeping missions would help India eventually gain permanent membership of the Security Council. But what has India achieved in reality? Despite its involvement in numerous peacekeeping operations in Africa for decades, most African states refuse to support India’s candidacy. Given China’s growing economic and military hold over Africa, the states of that continent are pursuing their own interests. India’s candidacy will be taken seriously only when India becomes an economic and military power of global reckoning, able to protect and enhance its interests unilaterally. Until then, Modi’s power diplomacy at the G-4 will have little meaning.

(Harsh V Pant is a professor of International Relations at the Department of Defence Studies, King’s College London)