NSA-level talks called off. LoC tensions on the rise. Non-state actors on a rampage. Is Pakistan’s military brass emboldened by an upcoming opportunity in Afghanistan? 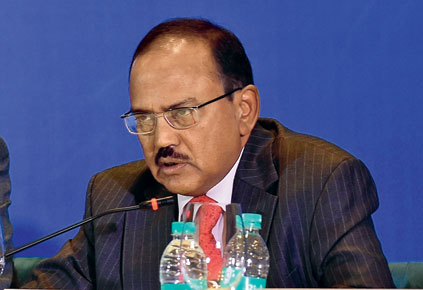 Mohammad Naveed, the Pakistani national and alleged Lashkar-e-Toiba operative arrested in early August from Udhampur, Jammu & Kashmir, is believed to have spilled the beans about the training he got in camps run by the Pakistan’s military. A senior government official tells Open that the “young man has been talking like a parrot and is therefore a major embarrassment for the Pakistani government”, which has done nothing to stop its powerful army from financing and equipping non-state actors to wage a war on India. “Naveed, or Qasim that he sometimes claims he is, may be small fry in the LeT scheme of things, but since he is not trained to hold back truth the way some hardened terrorists do, India has got specific information about the designs of the Pakistani military along the Indian border and has enough substance to confront any official from that country,” says the official, requesting anonymity. Another Home Ministry official confirms this, adding that “the bulk of evidence against Pakistani inaction in pursuing perpetrators of the 26/11 Mumbai attacks, too, would have been too much to handle [for Pakistan’s National Security Advisor Sartaj Aziz]”.

Pakistan’s hesitation in going ahead with National Security Advisor (NSA)- level talks, which it called off on 21 August, two days ahead of the meeting scheduled in Delhi on 23-24 August, was evident from its insistence on going beyond what was agreed upon in Ufa by Prime Ministers Narendra Modi and Nawaz Sharif—to focus on terror. According to senior officials close to the matter, it was Islamabad’s “stubbornness” on discussing the Kashmir issue with India’s NSA Ajit Doval that derailed the talks, following an exchange of words between Aziz and India’s External Affairs Minister Sushma Swaraj, who demanded that Pakistan assure India that its NSA would not hold talks with the leaders of the All Party Hurriyat Conference, a powerful Kashmiri separatist outfit in the 1990s but now a shadow of what it used to be. Notably, the Ufa declaration was committed to resuming a ‘composite dialogue’ between the two countries— something that was begun in the late 1990s—and that would certainly include a discussion of the Kashmir issue, a bone of contention between the two nuclear- armed neighbours that have fought three wars since Pakistan was carved out of India as an Islamic state in 1947.

Swaraj has come under attack from at least one columnist in India for being unreasonable in trying to secure an assurance from Pakistan’s NSA even after he had suggested that he would not meet Hurriyat leaders while in Delhi if India was averse to it. But foreign policy experts suggest that India’s red-line for Pakistan that it cannot have talks with the Hurriyat Conference, an umbrella group comprising 26 odd disparate political outfits, may have triggered the U-turn. India has been clear about this ever since the new Government came to power last May: Hurriyat leaders may have been meeting the Pakistan High Commissioner on the eve of Indo-Pak talks for more than a decade, but that is a practice that won’t be allowed any longer. The Government had more than a year ago sent out a strong mesage to Pakistan: either meet with us or talk to marginalised separatists.

Says Michael Kugelman, a foreign policy analyst and senior associate for South and Southeast Asia at Washington DC- based Woodrow Wilson International Center for Scholars: “This decision [to focus on terror and not on Kashmir in bilateral talks] is understandable and even admirable for its consistency.” He elaborates, “For Pakistan and especially its security establishment, all conversations must start and end with Kashmir. It had become a tiresome exercise, but Pakistan is resolute. A rethink would be ideal here.”

Speaking to Open on the phone, an American diplomat says that Pakistan “in reality and not in terms of optics” may have lost interest in any talks with India for the time being because that country senses a lot of “opportunity” in getting “a larger foothold” in Afghanistan as American troops plan to withdraw shortly from the war- torn nation. “Having a friendly government there is a big plus for Pakistan. Historically, it has been proved to be so. For instance, since the mid-1990s until the 11 September attacks, Pakistan was not excited about any talks with India because it had a friendly regime in the Taliban [which assumed power in 1996 and held it until its fall in 2001],” he notes. From a security point of view, it makes sense for Pakistan to engage with India when it faces a threat along its border with Afghanistan, a Ministry of External Affairs official agrees.

For his part, Stephen P Cohen, American political scientist and senior fellow in foreign policy studies at Brookings Institution, says that he is very disappointed about the cancellation of Indo-Pakistan talks. “Clearly there was fumbling on both sides when they stated that talks would happen; all of this, including Pakistan’s talks with the Hurriyat, should have been cleared up much earlier; there was perhaps a degree of clumsiness on both sides, and hyper nationalism in India and the army’s scepticism in Pakistan made it difficult to have a dialogue.” He is of the view that Pakistan shouldn’t have retreated from its earlier position on terror’s place on the agenda—following the cancellation of talks, Aziz suggested that Pakistan had insisted on inclusion of J&K in the Ufa statement and that India did not agree. He also said that it might have been a “trap” which Pakistan walked into. “India needs to be sensitive to our priorities also. That I should not use the ‘K’ word during the meeting was unrealistic,” Aziz said. Says Cohen, “Pakistan should revert to Musharraf’s formulation, that the LoC (with modifications) will be the final international border. I don’t know why they retreated from this.”

A section of analysts also say that it was impossible for Islamabad to sell the talks with India to the Pakistani public without Kashmir on the agenda. Of course, Sharif came under sharp attack in the Pakistani media for surrendering Pakistan’s interests to India. Kugelman says that the urban middle-class and other demographic groups pay attention to these issues, and Kashmir needs to be a sine qua non for talks with India. However, he adds, many Pakistanis, especially the rural poor, find such matters to be pure abstractions.

Meanwhile, an MEA official contests the assertions of pundits such as Cohen, saying Pakistan’s lack of patience in a structured dialogue is proof of its commitment to peace. According to the Ufa joint statement, Kashmir would have anyway been discussed, he argues. “But then there is a process in which there would be talks first between NSAs, which would be followed by officers of the paramilitary unit and then between the two Directors General of Military Operations,” he says, emphasising that Pakistan wanted to discuss both Kashmir and terror at the NSA meet itself. “They have derailed a composite dialogue that would have taken place for the first time since the 2008 Mumbai terror attacks,” he says. This official, who asks not to be named because he is not authorised to speak to the media, takes exception to Cohen’s remarks to Open that the 26/11 Mumbai terror attacks cast a shadow on India-Pakistan relations because “it is a ‘treasured grievance’ of India”. Cohen adds in an interview that “every country has these with other states (the US included, regarding Cuba and Iran), but if you can’t talk to enemies, who can you talk to?”

Counters the MEA official, “Can this be said of the World Trade Center attacks as well? That it was a treasured grievance of the US?” He also questions America’s flawed policy of aligning with Pakistan in what he calls an ill-fated war on terror. This, according to him was partially responsible for the rise of outfits like the IS, which has established a digital caliphate and revived Islamic militancy in a way that is tough to counter. Responds Kugelman, “Well, [the US] was desperate for help and Pakistan was seen [to be] in a position to help. I fear, though, that the US was snookered by [then Pakistan President Pervez] Musharraf and his pledge to be the US’s frontline ally against terror, just as the US has been snookered by the Pakistanis for almost 70 years.”

The US diplomat says that Pakistan’s political leadership should have made concessions to India, a victim of terror, despite pressure from the security establishment. Soon after the Indo-Pak joint statement of 10 July, C Christine Fair, a Pakistan analyst and the author of Fighting to the End: The Pakistan Army’s Way of War, had said that NSA-level talks were a joke, considering that India offers Pakistan a notion of false equivalence. In a discussion organised by Gateway House, she said that “both India and Pakistan are equally culpable for the security situation that obtains (prevails) and that’s just simply not true”. Fair added, “Pakistan is the revisionist state, Pakistan supports terrorism. India is largely a victim. So I’m not sure why India would put itself out on a platform that equalises its position relative to Pakistan. From my point of view, if I were India, I wouldn’t have these meetings because the fact of the matter is the national security advisor of Pakistan well knows that terrorism remains a tool of Pakistani foreign policy…” Following the Ufa declaration, skirmishes along the India-Pakistan border have led to tense situations, with several Indian officials contending that the latest spate of attacks from Pakistan marks a radical shift from the past, and has thrown life out of gear in these parts.

Notwithstanding criticism from a section of the local media for ‘mishandling’ the situation by resorting to ‘shadow boxing’, as a columnist described it, Indian officials are emphatic that Pakistan must come to terms with new realities. One of them says, “These are not the 1990s when there was a Robin Raphel [the former American diplomat who had allegedly passed federal secrets to Pakistan], who zealously promoted Hurriyat and Pakistan’s interests against India’s. We now have a greater say in matters global.”