Doubting the faith that drives us 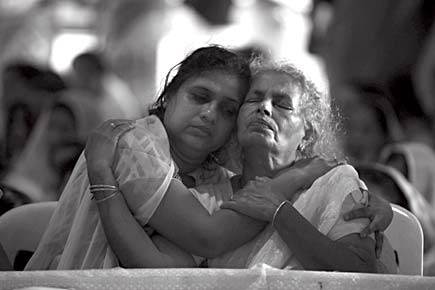 The belief that the God we made is the true God is a crucial ingredient of the soup we find ourselves in.


Ajmal Mohammed Amir Kasab was nobody till November 26, when a team of terrorists took Mumbai by its throat and slit its jugular, leaving nearly 200 dead and over 300 injured. Now Kasab is seen as the rabid face of terror.

Kasab is barely out of his teens. He is just 21 years old, and he is built small. But his image, caught by cameras in the middle of the mayhem he was unleashing, is chilling. It’s not just the AK-47 that he is holding. It’s the face. The eyes drawn to one side to detect the slightest threatening movement, the sheath of lips drawn back to reveal the dagger of a sneer, the body tensed for kill. This is Terminator in a T-shirt.

Kasab has been programmed. And the name of the software is Faith. According to reports, Kasab comes from Pakistan’s Faridkot, in Multan, South Punjab. This is an impoverished district, and is remarkable for the proliferation of madrassas, which not only impart the ultra-conservative Deobandi religious teachings , but also give food and lodging to children. The ISI-sponsored Lashkar-e-Toiba (Army of the Pure) feeds off mainly from the human fodder supplied by South Punjab.

Since most of Multan’s youngsters are educated at the madrassas, indoctrination is not a problem. During his interrogation, Kasab said: “I was told to kill till my last breath.” In reward, he would go to jannat. This is not just an empty promise. Paradise is guaranteed to the jihadi. As Jason Burke, who traveled to South Punjab in Pakistan on the trail of Kasab, says in his recent report in The Guardian, fighting for the Taliban in Afghanistan and in Kashmir is seen as “religious duty”. In return, Allah showers the faithful dead with spoils—arguably virgins and dry fruits—of the soul. Recall the telephonic conversation one Indian TV channel apparently had with a terrorist holed up in Nariman House, another theatre of the November war in Mumbai, in which he says he doesn’t feel hunger as he will “soon drink and dine with Allah”. Each bullet then is tipped with the steel of the promise of paradise. Each suicide squad then sets off to its battle station—Taj, Marriott or Mall—as if it’s a transit camp to heaven.

What would you not do for your faith? The belief that the God—man’s ultimate creation— you made is the true God and that your faith is the true faith are crucial ingredients in the soup we find ourselves in. You drink it and a new strength flows through you: a few sips and children are turned into killers, priests become prophets. What faith does most of all is empower. That’s a lot in a world that generally sucks. But it’s an empowerment that justifies all that you do. The righteousness we derive from it replaces rationality, which is what made us discover that we have descended from the apes, not the angels. It is the perceived superiority of our beliefs—in God, religion, nation, race—that gives us the licence to kill.

If God had his way, each one of us would be James Bond. Zero Zero Heaven.

There are several videos doing the rounds on the Net in which you can catch a True Believer like Osama bin Laden in conversation with his followers soon after 9/11. In one, he is seen sitting down on a cushion on the floor, asking his followers what visions they had on the eve of 9/11. As it happens, quite a few of them say they saw a plane crashing into a tall building. Osama is not particularly well known for his humour, but he smiles every time he is told of this apocalyptic vision. Why? Because, Allah is showing who is the Boss. If a jet crashing into a thousand heads is what it takes for Osama to laugh, what would make him cry? The fall of the twin towers in New York City brings a smile to Osama’s face, because that act of terror is life-affirming for him. If God did not will it, how would it happen at all? My God is true because the vengeful miracles he wreaks can truly hurt you. It’s another version of the macho folklore: my dick is bigger than yours and that makes me great.

How does a boy like Kasab become a machine? Though a fourth grade drop-out, Kasab is a quick learner, as his skills with guns and high-tech navigational systems show. As a commando, too, he is an exceptionally efficient one, as the national security forces would vouch. He is determined, focused and his integrity is without question: you can’t buy him for all the money in the world. These are qualities you want in your child. Except that Faith has worked its fatal charm on Kasab. The infidels he comes across are in one way or another complicit with the system that he has to break—with hammer, gun  and sword— to achieve his heavenly state. And so they are less than human. They are obstacles in a jihadi’s race to heaven. And surely, if you are not human, why should you not be killed, especially since the purpose of the murder is pure? Clearly, each terrorist kills in an act of desperate self-defence.

In the movie The Matrix, which is the closest Hollywood has come to a religion without a God, there is a much-quoted dialogue between a terrorist leader and a prospective recruit, who is guided by the idea that society is not giving him his due. This is what the leader says: “What you know you can’t explain, but you feel it. You’ve felt it your entire life, that there’s something wrong with the world. You don’t know what it is, but it’s there, like a splinter in your mind, driving you mad.” And he promises deliverance   by means of violence so pure that it could be called chaste.

As you read this, thousands and thousands of young people in Asia, Africa and Arabia are being promised deliverance, taught that human life is of no value, that destruction is a Divine dispensation, that the staircase to heaven is painted red with human blood. All of modern history from Christ (another man-made marvel; there is no real proof of Christ’s historicity) to the Crusades, to the Inquisitions, ideas of racial superiority that lead to the Hitlerian bloodbath, the Partition of India that is still being played out in bloody riots, to the Battle of Mumbai is Faith working its variously edged sword in various ways into the human flesh.

It was the 14th century English logician   William Ockham who said in his law of parsimony that in any consideration, “entities should not be multiplied unnecessarily”. Science explains fairly well now how the world works, and how it came about. Clearly God is an entity Ockham’s razor could be honed on and done away with. Christopher Hitchens quotes him to good effect in his God is not Great.

Clearly the way out of our fundamentalist morass is doubt, the loose stone on which the foundation of secular science and tolerant reason are built. Doubt your God, doubt your government, doubt your tradition, doubt all given wisdoms. Doubt yourself.

If Kasab and his friends had doubted for a moment what they were being taught, if they had wavered an instant before they pulled the pin of their grenades, a lot of people might have been still busy going about their one and only life.  And this winter would not have found so quick a way to hoarfrost the heart.