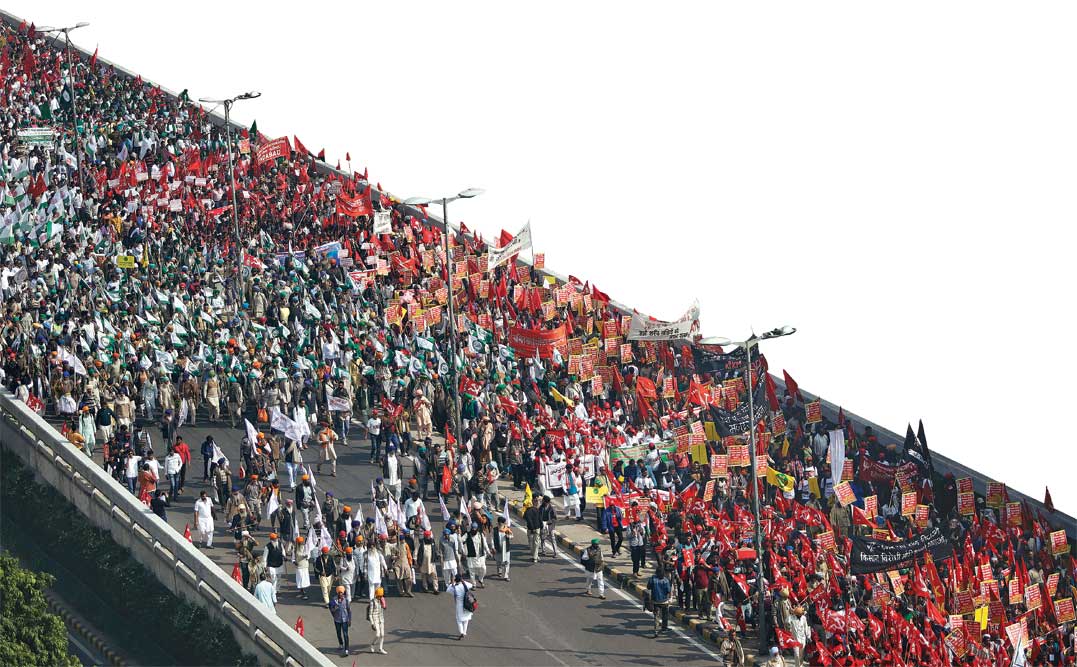 THOUSANDS OF BAREFOOT farmers marching in the country’s capital demanding ‘justice’ are a sight that can melt the most stone-cast of urban hearts. The street procession seen on November 30th, however, was a repeat of many similar events in recent times. With widespread distress in India’s farm sector, an impending general election and growth tapering in recent months, the Narendra Modi Government has plenty of economic management troubles at hand.

Billed as ‘a peaceful march by distressed farmers’, the Kisan Mukti March took another turn, though, when opposition leaders flocked to the protest site at Parliament Street in the heart of New Delhi. With politics overshadowing the proceedings, the reasons for the march and the economics behind the farm downturn took a backseat.

If one leaves aside the more emotive side of the demonstration, there was nothing new in terms of the demands being put forth by farmers or people behind the march. To highlight two, farmers want more debt relief and better prices for their crops. Both these have been met in the recent past. Together, Uttar Pradesh, Karnataka, Andhra Pradesh and Maharashtra have waived farm loans totalling around Rs 1.5 lakh crore. In the past fiscal year, 2017-18, these waivers amounted to 0.32 per cent of India’s Gross Domestic Product (GDP).

That was not the only step taken by the Union and state governments to help farmers. In July this year, the Union Government announced an across-the-board increase in Minimum Support Prices (MSPs) for crops to the tune of 22 per cent over the figures last year. This, too, has been greeted with calls for more. One alleged controversy surrounds the base cost over which MSPs have been increased. The Commission for Agricultural Costs and Prices (CACP), the body that recommends MSPs every year, studies farming costs and issues various estimates of the same. These range from simple calculations that cover costs such as seeds, fertilisers and other inputs to more complex formulae, the most comprehensive being the C2 formula, which includes interest forgone on owned land and fixed capital assets, among other things. In most years, governments offer a healthy increase over the basic costs. But in recent years, farm lobbyists and their political backers have routinely demanded that the so-called ‘Swaminathan formula’—a 50 per cent increase over the ‘weighted average cost’ of production—be the basis of raising MSPs.

This is a rather reckless demand and if conceded, will only create multiple economic problems for any government. For one, the latest round of hikes in MSPs have been estimated to cost anywhere from 0.1 to 0.3 per cent of GDP. If the Government agrees to go by the Swaminathan recommendation or bases MSP increases on the more comprehensive cost calculations, the total bill will go up anywhere from 1 to 1.5 per cent of GDP, a gigantic sum that no one ruling the country can afford.

If the government gives in to the demands made by farm lobbyists, the fiscal deficit calculation will not only go haywire, but will also cause inflation

These worries should be seen against the danger of slipping from the budgeted target of expenditure this year, something that many analysts say is a distinct possibility. A revenue shortfall from the Goods and Services Tax (GST) is estimated at around 0.1 per cent of GDP, while that from non-tax sources could add another 0.1 per cent. Excise duty and price cuts on fuels in October even as global crude oil prices rose is expected to add another 0.1 per cent to the missed target. The latter effect has probably been neutralised after the recent fall in global oil prices. Similarly, on the expenditure side, the food subsidy bill—where MSP increases enter the fiscal deficit calculation—is expected to raise the deficit by 0.1 per cent, and the petroleum subsidy bill, another 0.1 per cent.

There are various ways to offset these deviations. For example, one set of estimates says that roughly 0.3 per cent (as a percentage of GDP) can be managed by reducing current and capital expenditure. Another 0.2 per cent can be handled if the GST Council allows the Government to take surplus money from the compensation fund. This fund holds the proceeds from cesses levied on items such as tobacco and luxury cars that the Government collects, and is supposed to compensate states if they are unable to meet their revenue targets under the GST regime.

As is the case with all such calculations, this one, too, is full of ‘ifs’ and ‘buts’. In case the Government gives in to the demands made by farm lobbyists, the fiscal deficit calculation will not only go haywire, but will also dent the Indian economy. Inflation and a spike in interest rates, hurting the economy’s growth prospects, are certain conclusions in this case. For obvious reasons, the Government has not given in.

There are two real economic issues that confront the farm sector, away from populist demands and emotive politics. One, the agriculture sector now barely contributes 15 per cent to India’s overall output, while the workforce it employs is close to 50 per cent. If one looks at the rural population, the latter figure is considerably higher. But leaving aside definitional disputes, it is a stark fact that more than half this country’s population is dependent on a sector that has an ever-shrinking share of the economic pie. Then, there is the issue of a historic fall in the prices of agricultural commodities. This October marked the tenth consecutive month of falling food prices (adjusted for seasonal variation). Calculations by HSBC India suggest that 70 per cent of the recent disinflation is due to a decline in rural inflation.

It is a well-known fact since the days of Nehru that India needs fewer hands in agriculture. But it is equally true that policies pursued since then have ensured that few people leave the sector at all

While this collapse in farm commodity prices is politically troublesome, there are complex reasons for it. For one, better logistics and food chain management have resulted in greatly reduced wastage of these goods, leading to markedly improved availability and hence better meeting of demand. For another, the last few years have seen a steep decline in rural incomes, something that has depressed the demand for these goods consumed in rural areas. In fact, the situation is so bad that the 22 per cent increase in MSP has hardly led to any appreciable increase in the prices of food items.

There have, no doubt, been some ameliorative steps that have been taken by governments. For one, there has been a government- sponsored surge in construction activity that has employed people from these areas. To some extent, this has led to a slight increase in rural earnings. In a pre-election year, this is but to be expected. Further, many state governments—including that of Madhya Pradesh, which has witnessed a considerable degree of turmoil in the last few years—have taken steps to reduce the volatility in the prices at which these commodities are sold, providing a much-needed cushion to farmers.

So what should be done to help India’s farmers? One ‘obvious’ way is to raise the prices of agricultural commodities—or technically, ensure inflation in their prices—as many opposition politicians routinely demand. Such a shift in the terms of trade against industrial goods and consumables is the usual way in which farmers have been ‘helped’ by successive Indian governments since the late 1960s. But this still does not answer the question of why the Indian farmer continues to be in such dire straits. The continuous increase in agricultural prices and debt waivers after every few years is not really a solution. If anything, they make the task of economic management ever tougher. The real solution to the problem requires something other than mere price manipulations. It is a well-known fact since the days of Jawaharlal Nehru that India needs fewer hands in agriculture. But it is equally true that policies pursued since then have ensured that few people leave the sector at all. In the decade from 2004 to 2014, non-productive expenditures on rural areas were increased dramatically to the point that labour costs rose sharply even in urban areas: people simply stopped migrating from villages. When the cost of those spending binges were taken into account, rural wages simply collapsed in their wake. The agriculture sector is yet to recover from that shock.

In an election year, all these points seem quaintly academic and moot. No party can hope to form a government if it does not spend money generously in rural India during this phase. The BJP is no different in exhibiting this behaviour. It may indeed help farmers for a couple of years, but after that they will be back to square one (or on the roads of the capital in protest). Lasting solutions require a shift in spending priorities apart from long- term planning. One, there should be no blanket farm loan waivers. That only injures the banking sector. Two, if agriculture is to revive, it needs a heavy dose of investment, something that can only happen if food and other subsidies are reduced. And finally, the infrastructural bottlenecks that cripple the sector need to be fixed. There is indeed a case for reducing the volatility in farmer earnings, but this cannot be on the basis of inflating the prices that urban consumers pay for food. In an election season, this makes a great deal of sense for many politicians and parties, but it does not help farmers in any sustainable way.