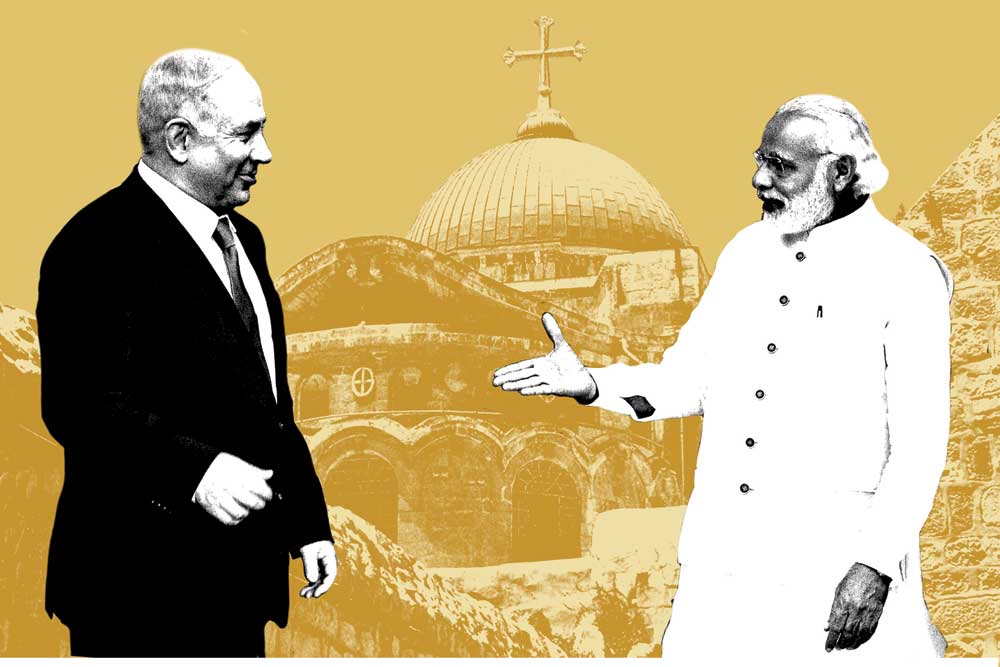 A SONG FROM A Yash Chopra film is playing at Tandoori Inn, an Indian cuisine restaurant in Tel Aviv’s upmarket Dizengoff Square: ‘Humko hami se chura lo, dil main kahin tum basa lo (Steal me from myself and hide me in your heart).’ The music reaches passersby before the aroma and works as a perfect bait. “Shalom, yes, we serve authentic Indian food,” says Jaspal, welcoming Israelis who might want to dine at Tandoori Inn. An immigrant who moved to Tel Aviv eight years ago from India’s hill state of Uttarakhand, he offers me his take on Narendra Modi’s upcoming visit to Israel on July 4th, the first ever by an Indian Prime Minister. “If Pakistan or China look [aggressively] at India, who will help India?” he asks, “Israel or Palestine? So who should be our friend?”

India and Israel are allies in the fields of intelligence and defence: the former’s Research and Analysis Wing (RAW) and the latter’s Mossad have been sharing information on terrorist networks in fend off a common threat, even as the two countries’ bilateral arms trade has doubled from $276 million in 2015 to $599 million in 2016. Friendship with Israel, Jaspal believes, is beneficial for India.

Professor Efraim Inbar, of the Begin-Sadat Center for Strategic Studies in Jerusalem, agrees. He pictures a coalition of the US, Israel and India to counter China’s growing global influence. “India and Israel are fighting the common enemy of Islamic terrorism through intelligence exchange and in future, we must present a counter to the Chinese,” says Professor Inbar. “Your Prime Minister has just visited the US. I hope with Trump in power in Washington, we have stronger strategic cooperation.”

Whether the Israeli overtures towards India are part of a wider plan to form a global alliance to take on China is a matter of dispute. Israeli Prime Minister Benjamin Netanyahu had a trying time when Barack Obama was in the White House, and analysts in Israel say Tel Aviv’s strategy is not to keep all its eggs in one basket; hence the leadership has been trying to intensify cooperation with several nations across the world.

Israel has been under pressure over settlements being built in Palestinian territory. It has got around diplomatic blocks, but a global movement called BDS—Boycott, Divestment and Sanctions—has taken shape to stall its settlement expansion policy by impacting Israel’s economy. This is where India’s economic heft comes in. “From an Israeli point of view,” says Ofer Zalzberg, senior analyst of the International Crisis Group, “Modi’s visit to Israel is part of Israel’s relatively successful efforts to adapt to a changing world and global economy, and by doing so, it is shifting away from a high degree of dependence on the US and Europe—at least on some issues.”

For Jaspal, it isn’t the economic but defence cooperation that counts. Similar views are often reflected in social media calls for India to emulate the ‘strong’ measures Israel takes against its ‘troublesome neighbour’ and mark a significant shift away from the approach of Gandhi and Nehru who based foreign policy on principle.

ON THE QUESTION of Israel’s creation, Mahatma Gandhi had declared on November 11th, 1938: “My sympathies are with the Jews… but my sympathy does not blind me to the requirements of justice. The cry for the national home for the Jews does not make much appeal to me… Why should they not, like other peoples of the earth, make that country their home where they are born and where they earn their livelihood?” The political context of the time was different: India was struggling to stay united, and for a people to ask for a separate country based on religion was anathema to Indian ears. Partially based on the principle that nations must not be formed on the basis of religious affiliation, India voted against the partition of Palestine in 1947 and then against Israel’s admission to the United Nations in 1949. Even though Nehru softened India’s stand in 1950, the Israeli-Palestine dispute raged on and diplomatic ties with Tel Aviv were established only as late as 1992.

The world has changed since. Issues of identity have reasserted themselves and nationalist right-wing parties have been on the ascendant. In Israel, the Right-wing Likud party—to which Netanyahu belongs—first came to power in 1977. In recent times, even more rightist religious parties like the Habayit Hayehudi—‘the Jewish Home’—have emerged. In India, it’s the BJP that has arisen.

In his office overlooking the Mediterranean in Tel Aviv, Indian Ambassador Pavan Kapoor attributes the decision of an Israel visit by an Indian Prime Minister to the strength of the 2014 mandate the BJP received under Modi. “It is a formal coming out in a clear and unequivocal manner that we are Israel’s partner,” says Kapoor.

Zalzberg says the time is right because of an alignment of ideologies between the most popular political parties in both countries. He says, “The parallels between Jewish national attitudes to the Temple Mount [and the dispute over it] and Indian national religious attitudes to Ayodhya [and the dispute over it] suggest similarities in the attitude to sacred sites.” Hoping to cash in on Modi’s visit isn’t just Netanyahu’s Likud party but also the Habayit Hayehudi (or The Jewish Home) run by Naftali Bennett, a tech entrepreneur who was in an elite army unit. “As you know, religious Zionism is ascendant in Israel,” says Zalzberg, “Modi’s success in winning the premiership can be viewed as a precursor for Israel’s religious Zionists like Mr Bennett to do the same.” Gregg Carlstrom, a journalist and the author of How Long Will Israel Survive?: The Threat from Within, sees both Netanyahu and Bennett as the ‘Modis’ of Israel. “In Modi,” he says, “they see a kindred spirit. Right-wing nationalists emphasise religion as part of the state’s identity. What’s happening in Indian politics is a lot like here, and a lot of people in Israeli politics are doing the same.”

Notably, the pre-Independence Hindutva leader Vinayak Damodar Savarkar had welcomed the creation of Israel and opposed Nehru’s criticism of it.

IN EAST JERUSALEM, young men—some of them in their teens—in T-shirts and jeans walk around with sten guns slung on their shoulders, enjoying a cola here or a spot of banter there. Back in Tel Aviv, a uniformed soldier sits with a girl on a bench, showing off his Glock pistol. These are common sights.

Israel, it seems, has made peace with the cost of the conflict. Why risk losing territory by asking for peace if you can deal with the status quo? “No political party is in a position of even giving a road map for the resolution of the conflict. The Labour party that is called the ‘peace camp’ has said it would take 10 years before it can even talk about a resolution,” says Carlstrom.

On May 17th, Palestinian President Mahmoud Abbas had visited Delhi for a reassurance that India would sustain its support for the Palestinian cause. “We hope to see the realisation of a sovereign, independent, united and viable Palestine, co-existing peacefully with Israel,” Modi told the press, with Abbas standing next to him. It was a reiteration of India’s stated position, and analysts believe Delhi needs go no further, especially at a time the cause has so few backers in the Arab world.

To the dismay of many Palestinians, the status quo is set to endure. “You think Israelis will ever leave all of Palestine? Never,” says a Palestinian businessman, “Who cares about us? Since the Syria war began, nobody even looks at us.” The Arab Spring, Syrian conflict and the emergence of ISIS have shifted the region’s focus away from Palestine and led to cooperation between supporters of the 70-year-old cause and Israel.

Egypt’s President Abdel Fattah el-Sisi, for example, has come down hard on tunnels used by Palestinian residents of the Gaza Strip, a patch just across its Sinai border under an Israeli blockade and the control of Hamas (a group that’s termed a terrorist organisation by the US and shunned by the Palestinian leadership under Abbas). In 2012, Carlstrom had visited one of these passageways that serve as a supply channel for Gazans. “I took a train through the tunnel in Gaza and got out on the other side of it,” he says. “That isn’t possible anymore.” Egypt suspects collaboration between Hamas and ISIS and has been sharing intelligence on them with Israel and responding to ISIS attacks on Sinai with heavy force, even at the cost of collateral Palestinian damage.

In 2015, Israel opened its first diplomatic mission in the UAE, even as business ties between Israel and Gulf countries grow. The same year, Saudi Arabia and Israel admitted to having held secret talks over Iran, whose regional influence both want curbed. After US President Trump’s visit to Riyadh and from there to Israel, The Wall Street Journal reported a tacit understanding in the making between the Gulf nations and Israel. The Israeli media widely reported that if Israel agrees to freeze construction in Palestinian areas, then Israeli businesses would be allowed into Gulf markets, Israeli flights would be allowed to fly over Gulf air space, and other ties could be established. Abbas, meanwhile, asked Israel to cut off all electricity supply to the Gaza Strip.

If the Palestinian parties are at war and the Arab world is striking deals with Israel, from India’s perspective it isn’t a conflict for Delhi to resolve.

AT A FIVE-STAR hotel in Delhi soon after the BJP’s 2014 victory, I met a senior Israeli diplomat to talk about what the Indo-Israeli relationship would be like under Modi. He said they had already started planning a visit by the Indian Prime Minister. “We are surrounded by countries that are not friendly to us,” he said on condition of anonymity, “If you look at the map, we have to cross 4,000 km of hostile territory and then we get to India, a friend. You have problems in your neighbourhood, and we want to strengthen our relationship.”

India has managed to dephypenate its relationship with Israel and Palestine and is happy to cooperate with Israel against terror. It is the fight against terrorism and how India can use Israel’s know how in counter terrorism that brings the two countries on the same side of history.