Cricket: Game Not Over 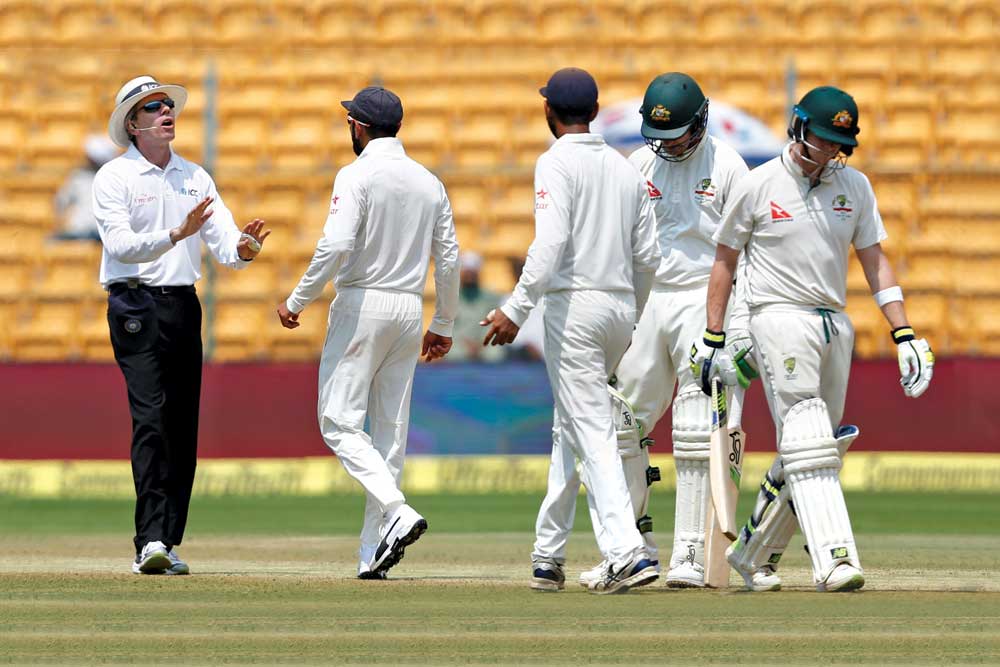 FIRST, PICTURE A dog. An old, scraggly mutt. He doesn’t shake hands, perform tricks or fetch newspapers— that kind of dog. Tugging at the choke chain, no sense of self-preservation dog. The kind of dog your children will never take a shine to. Sometimes, even you will secretly wish that it would be better off for everyone if he were gone. That kind of dog. But sometimes, just sometimes, when the half-blind, fully self-centred fellow lays a squirrel at your feet and shows you how much he cares, your devotion to him begins to border on the profound.

That kind of dog has a name. He’s called Test cricket.

Earlier this week in Bengaluru, that old mutt hauled himself up the couch, nuzzled your neck and told you it will be ‘A-okay’. Because that’s exactly how overwhelming those four days of pure, old school cricket—asphyxiating, long-format cricket— were. Unanimously observed by all those who witnessed it (fans and critics alike), the match brought out a range of rich, primary emotions: fear, anger and sadness at one end. Joy, admiration and anticipation at the other.

This Test match, and Australia’s ongoing tour in India, will now set aside the phenomenon that was the series between these very teams in 2001. During the 16 years in between, the dog had nearly lost relevance on these shores.

Like in life, the story of a Test match—any Test match, least of all an enthralling one—cannot be told without a larger narrative, a backstory. Before the Australians arrived on this soil, Virat Kohli’s India had gone unbeaten in 19 Test matches—13 of those in India. They had won six consecutive Test series—the lack of contest draining the format of its romance. Australia, on the other hand, had last won a Test match on the turning tracks of Asia back in 2011 (Galle), a time when their current captain Steven Smith was still aspiring to be a leg-spinner.

In spectacular fashion, Australia answered back on the dusty minefield of a wicket in Pune. For the first Test, the teams were welcomed with an abrasive pitch, one that was expected to turn square from Day One. It did, promptly bringing the Australian spinners into play. The greatness of India’s spinners—R Ashwin, Ravindra Jadeja and Jayant Yadav—lay in the fact that they could summon their expertise and artistry on neutral pitches. A rank turner had blunted that edge. That winning edge.

The unlikely Australian win (by 333 runs) produced an unlikelier hero in left-arm spinner Steven O’Keefe (he took 12 wickets in the fifth match of his career) and the unlikeliest scorecard— Kohli’s team was bowled out for 105 and 107 in the two innings. Test cricket in India was once again a bar-room brawl. The romance was back. “We shut a few people up,” fast bowler Mitchell Starc said after the match. “But it’s only one Test win, not a series win yet.”

By the time we took our seats at the M Chinnaswamy Stadium, Bengaluru, plenty of water had flowed under the Halasuru bridge. When Kohli won the toss on what seemed like a batting wicket, commentator Sanjay Manjrekar said rather than asked: “So Virat, obviously you will be batting first?” He did and before the end of day, India had been bowled out almost single-handedly by Nathan Lyon (figures of 8/50, the best bowling figures by any foreigner in India) for 189—their third straight innings of less than 200.

At stumps on Day One, Australia had consolidated their momentum, their openers David Warner and Matt Renshaw returning to the dressing room with the score at 40 for no loss. Captain Kohli, said pundits in the press box, would do well to draw this match.

THE SAME PUNDITS will also tell you, but only with the crutch of hindsight, that the turnaround unfolded over Day Two, with the speed of growing fingernails. Over the course of seven part-excruciating, part-hypnotic hours, India’s bowlers choked the Australian batsmen for runs. The going was slow for the men in the middle and also the spectators in the stands, with the visitors scoring just 197 runs (at a rate of 2 runs an over) all day. Momentum stalled, if only temporarily, Kohli still had to ensure that their first innings lead wasn’t a sizeable one.

The lead had a number early on Day Three—87. The Australians would’ve liked a more bloated figure, but on this two-paced pitch, where some balls reared from good length and others kept alarmingly low, coupled with India’s now-brittle batting line-up, it could’ve just been enough. It seemed more than enough when India found themselves floundering at 120 for four (essentially 37 for four), with no Kohli (dismissed for his fourth successive score of 15 or less) to forge a rescue either.

Just as Australia threatened to run away with the match, two walking wickets in this series, Cheteshwar Pujara and Ajinkya Rahane, dug deep and learned to crawl. By the end of the third day, both were unbeaten and India had a lead of 126

A lesser team, or almost any other Indian team from our recent past, would have folded under the weight of this pressure. But not Kohli’s India. Just as Australia threatened to run away with the match, two walking wickets in this series, Cheteshwar Pujara and Ajinkya Rahane, dug deep and learned to crawl. By the end of the third day, both were unbeaten and India had a lead of 126.

“In the last two years, it’s one of the top two partnerships, or maybe number one,” Kohli said later. “Because retrieving lost momentum and giving the team the lead was a question of character, and they both showed why they are India’s best Test batsmen.”

For three grimy days, the drama had played out like a soap opera. It climaxed on the fourth day. Starc broke the partnership and snapped a stump, Josh Hazlewood crippled India’s lower order and Australia seized back the momentum, giving themselves a target of 188. The match was now ablaze, a fire that bellowed with the spectators’ final day tickets. Even the most optimistic fan was aware of it.

Australia burst out of the gates in a hurry, wiping away 42 runs for the loss of just one wicket. But in a Test match where predictability was at a premium, India struck back with three wickets—all of which brought into play the contentious nature of on-field reviews and the Decision Review System (DRS). All of which would lend the final ingredient that makes some India- Australia Test series’ more mythical than others—one captain dragging the reputation of the other through mud.

It began in 2001, when Steve Waugh claimed to have been ‘wound up by (Sourav) Ganguly’s continued petulance’, and only got worse in 2008 when Anil Kumble all but called Ricky Ponting and his men cheats. “Only one team played in the spirit of the game,” went Kumble’s most famous quote at a press conference. Now coach of the Indian team, Kumble watched Kohli go a step further.

Test cricket. The old dog was now foaming at the mouth.

Virat Kohli was stirring up a frenzy. Not with his bat. Not with a microphone, as he would do later. At this moment, 1:46 pm on a turbid Tuesday afternoon in Bengaluru, Kohli was doing so with his bare hands—moving them like two spades raking up earth. He and his team, after all, were shovelling out of a grave they had dug for themselves over the last three days.

To Kohli’s plea, some 30,000 spectators responded spectacularly. The concrete and plastic interiors of the Chinnaswamy Stadium resembled a living, ventilating, hyperventilating thing. They chanted Kohli’s name. Then the country’s. Then there was a Mexican wave. And another. The wave crashed against a drum roll and ebbed. The drum roll climaxed with a spine-chilling ‘Huh!’

The Indian captain clapped for the crowd, then placed those palms on his knees and resumed his duty at first slip. You couldn’t see his eyes (veiled by sunglasses, of course) but you knew they were now trained at the batsman, Steven Smith. Smith is Australia’s captain, Australia’s best batsman and Australia’s best bet in this tricky run chase. Put simply, Smith is Australia’s Kohli. Once he twitched into his stance, Umesh Yadav began his run-up from the far end of the field.

The ball kissed the dry, cracking, two-paced pitch and stayed low. Low enough to resemble an underarm delivery, smashing into the toe of Smith’s shuffling boot. He looked up immediately and shook his head; knowing that he was gone for all money. So did the umpire, Nigel Llong, who raised his finger and so did Kohli, who pranced past Smith’s peripheral vision and the stump mic and simply said, “Fuck off”.

But Smith couldn’t afford to. Neither could his team. Not at 74 for three. Not on a venomous pitch where the target of 188 seemed more like 788. So Smith stayed put and decided to check with his batting partner, Peter Handscomb, if the deadest LBW in the history of LBWs was worth reviewing. Only, he had only 14 seconds to initiate DRS. Handscomb looked sheepish, so Smith turned to the Australian dressing room, twisted his palm and asked them what they reckoned (a clear violation of the rules). And all hell tore loose.

Now umpire Llong is rushing towards Smith, wagging his finger like a school teacher who has finally caught the chalk- thrower. Now Kohli is rushing towards Llong and Smith, hissing “See! I told you, I told you.” Now Llong is standing between Smith and Kohli like a referee in a boxing ring. Now Smith is on his way back to the dressing room—dragging with him his team’s hopes, his spikes leaving behind a trail of dust and divot. It may as well have been gun powder, for an already incredibly volatile match is about to explode into a cloud of controversy. Not on the pitch—where Australia would eventually lose by 75 runs—but at the other end of the trail, in an innocuous press room.

“I got hit on the pad and looked down to Petey and he said ‘Look up there’,” said Smith, when asked about what happened. “So I turned around and it was a bit of a brain fade on my behalf. I shouldn’t have done that.”

“Brain fade?” asked Kohli, when informed about Smith’s defence during his press conference. “The way I left the ball in Pune, you know, getting hit on the off stump. That was a brain fade. But if something is going on for three days, then that’s not a brain fade, as simple as that.”

The insinuation, for a room full of journalists, was too juicy to pass. Did it happen earlier as well then? “I saw that happening two times when I was batting out there,” Kohli replied. “I pointed it out to the umpire, that I’ve seen their players looking upstairs for confirmation, and that’s why the umpire was at him.”

Is the unmentionable word ‘cheating’, asked a reporter. Kohli smiled. “I didn’t say that, you did.”