Online ventures are at risk of a consumer backlash 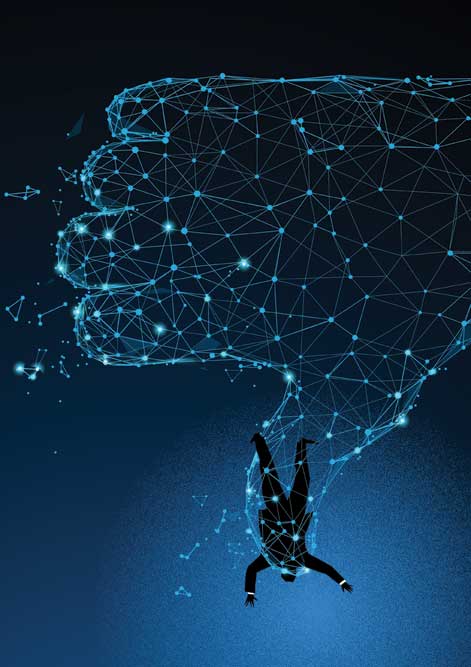 NO DOUBT SOMEONE would have said this long ago, but gazing at a crystal ball on New Year’s Day is a bit like driving a car in dense fog: it doesn’t matter if you’ve got your eyes on what’s up ahead or reflected in the rear-view mirror, so long as you haven’t lost your bearing. For safety’s sake, though, it’s advisable to acknowledge that the future is subject to far greater change than the past. Way too many WhatsApp ‘forwards’ have it backwards.

What shifts might the world of business undergo? The fog here is generated by data, terabytes and terabytes of it, monstrous loads and loads so full of soundless fury that they must surely signify something. But what? It’s only a faint outline in the haze right now, but an early bet could perhaps be placed on a global shift in consumer attitudes, an online flight to privacy that every venture might have to reckon with this year.

Businesses born in cyberspace would have to watch out for any such uprising all the more, especially those that offer ‘privacy settings’ as a sort of pre-nup deal for instant acquiescence (often the only option to an endless scroll of technobabble). If it does indeed happen, it could possibly warp two convergent trends—nay, phenomena—that claim credit for a vast bulk of all the wealth generated since the advent of the Information Age. While consumer revulsion against being snooped upon may not have achieved critical mass yet, with market surveys having sniffed out rather little so far, it could still catch us offguard.

The first trend has to do with the elementary nature of software. It may use silicon for storage, but actually exists only as 0s and 1s, the ayes and nays that constitute information. Unlike a physical product that requires raw material for each unit, it can multiply itself infinitely at virtually no cost once it’s designed. This allows it to escape industrial limits on how much stuff can be churned out before inputs get too costly for profits to be sustained. The real marvel of ‘increasing returns to scale’ is the advantage it endows a dominant firm with: unless this company somehow gets knocked off its trajectory, it just expands and expands until it’s impossible for rivals to catch up with it, resulting in a kind of winner-takes-all market. The second trend grants an early mover even quicker dominance of an arena. If it’s an internet platform meant for interaction among users, then the largest one attracts even more numbers by sheer virtue of its reach, with ‘network effects’ assuring it the prospect—and profits—of sole survival as smaller options drop off by and by. Such an app may well be free for users, but it’s also true that a monopoly is easily tempted to boost its bottomline by exerting power behind the screen to snuff out competition, cramp all space for innovation by others and deploy its user database for ungainly gains.

Facebook, of course, has straddled those two megatrends to perfection. It’s a social network software—one that took over its only threat, WhatsApp—and while nobody doubted its might all these years, an outbreak of scandals over its alleged abuse of people’s personal details (‘leaked’, it seems, for shady purposes) appears to have cast it villainous in ways hard to imagine till recently. One cartoon in circulation has its chief Mark Zuckerberg in jackboots with an ‘f’ armband and a globe twirling on his finger. Some consider this company eminently qualified to helm the internet’s ‘FANGs’: Facebook, Amazon, Netflix and Google. While the last of these has also been accused of spying on users (among other things), the other two get a lot less flak.

What’s common to them, though, is the scale-and-network double edge. Amazon broke ahead not just on the ‘A to Z’ availability of retail stocks, but also the indirect interactivity of book/ product reviews and the accuracy of demand patterns drawn from data at its disposal. Netflix, meanwhile, has made the most of its user base to master the curative art of offering what various clusters would like to watch. Google was an internet popularity poll—or ‘beauty contest’ as Keynes might’ve called it—to begin with anyway, its search engine based on the idea of asking crowds. And then there’s Uber, too, another creature of cyberspace that has used net-enablers to vroom ahead. Like a private web with millions of data input nodes, each of these companies has leveraged linkups for success, and it’s no surprise that India’s own online whipper-snappers are trying to sharpen the same edge. Be it food delivery, cab hailing, holiday reservations or e-commerce, the few seen ahead of the pack are the ones achieving all the eye- popper valuations. It’s almost as if investors expect them to tweak their game and exercise extra clout at some point to get back the mega-bucks they’ve ploughed in. For now, all manner of baits are being dangled to sign up the multitudes.

In the fiercely contested market for food delivery, with Swiggy up against Zomato, it’s a veritable war of slashed menu prices out there. In e-com, though, where Flipkart is vying with Amazon, regulatory clamps could restrict avenues for price warfare (even if the recent rules issued by the Centre look like the legacy of a policy to shield regular retailers from full-fledged foreign competition, not e-com warriors from each other). All the same, what seems lost on marketers in the din of discounts is the privacy problem. Not that CEOs don’t make reassuring noises now and then. They do. Yet, according to youngsters who call themselves ‘ethical hackers’ (without batting an eyelid), ‘data security’ is an oxymoron at most firms. In Europe, public anxiety over leaks has attracted the attention of regulators. In the US, it’s the subject of many a powwow. In India, while it might take a full-blown scam to shake most people up, enough are worried.

MARKET MAVENS SAY it’s ultimately about the consumer’s trust, the one thing a brand can’t afford to lose. While Facebook’s own count of ‘daily active users’—a claimed 1.5 billion—has not suffered a blow, with remarkably few having fled, reports of people giving up on it are no longer rare. This suggests that its crisis of confidence is not over, even if its business performance appears to have recovered from its mid-2018 crash, when its equity shares lost a fifth of their value in a single day on faltering figures. The company is currently being probed for malpractices in America. As word gets around of what goes on behind the screen of that big blue ‘f’, the wave of users put off by what they hear is likely to crest only later. And if this disaffection turns tidal, it could conceivably set off reverse network effects. What whips its way up could also wind its way down, or at the very least see its self-perpetuation formula lose force.

Brand equity is not a measure of fame, but of how steadfastly a famous name adheres to the values it espouses (in popular perception). Apple, for example, has largely stuck to its stance on privacy since it first broke into our mindspace as a defender of liberty. Its rise as an enterprise remains one of the world’s most spectacular stories of success. Yet, even this upholder of freedom was apparently unable to resist trying to bully car owners guided by CarPlay into using its own navigation app over Google Maps (which, by the way, also happens to know every spot you’ve been to).

In all, free choice has begun falling victim to market processes that once held the promise of being squarely in the consumer’s interest, and this could well be the year that intimations of a grand betrayal ring home. The likelihood of it is no longer trivial. Yes, it may take some while to show up on corporate radars, and clever public relations might be able to contain some of it, but suspicions have been aroused. More and more have begun to wonder if a devious game is being played on them.

Viral expansion has been the outcome of trends we’ve long come to take for granted. It’s not that every dominant brand is up to no good. But all it takes is one domineering rogue for the perils of modern life to emerge from the obscurity of a foggy screen and turn people discerning—at long last.