That Rustle of a Ruffled Rupee Again

Given how globalised India has got since the rupee was freed to float, turbulence was only to be expected. But it may not be such a bad idea to nudge the currency along a bit 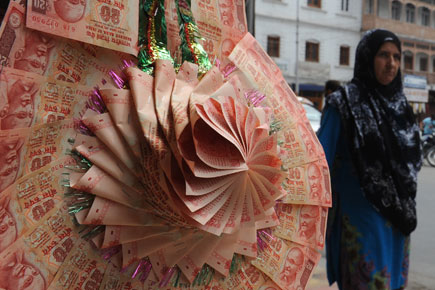 Curves can be hard to resist at times, and so it’s easy to fancy the rupee tracing an aesthetic arc along a graph as it slips its way towards 69 per dollar in India’s 69th year of independence. The country’s currency is not there yet, but it came within a whisker of that figure about a couple of years ago, when it looped a low of 68.84 in August. While its recovery was swift and dramatic, recent volatility in world markets—brought on by China’s softer yuan, and, more convulsively perhaps, the prospect of a policy of less loose money in America—could easily send the rupee down that loop again, if not lower. Judging by its swoons of early September, it may not be a smooth descent. It was down to almost 67 at one point the other day, and several rupee watchers expect relief rallies to be short-lived.

When outcomes are uncertain and risks deemed a little too high, market prices tend to become pictures of spikey fits and starts. In the forex bazaar, a sense of calm has been assured by India’s stated policy of a ‘managed float’ for the rupee, which essentially means that the RBI lets its global value move one way or another under the influence of market forces, but, day-to-day, does so only within cushioned limits so that no one gets hurt. This makes sense.

Rupee sensitivity has risen enormously over the past two decades or so. Businesses that have taken dollar loans, for example, must now watch out for any drastic slide that would inflate how much they need to repay in rupee terms. Exporters, on the other hand, are usually pleased by the export boost granted by a weaker currency and the lower prices it implies for their wares in foreign markets. Any sharp change has its winners and losers. For some, it could even be a make-or-break event.

Electing to keep the rupee’s value fixed sounds a whole lot simpler. Alas, this is not feasible. It would amount to pegging one currency to another. And a peg could play havoc with all sorts of other variables (such as inflation) in an economy open to the world for business. Any country that allows global money to flow in and out discovers sooner or later that it can control either its currency’s exchange rate or its internal level of cash, not both. This is not just theory. It happens in daily practice on Mint Street. If the RBI uses chunks of its dollar reserves to buy rupees (aiming to support its value), the process sucks the local economy of its cash liquidity, which, unless released right back (via bond purchases), would spell tighter local money. While India Inc would probably protest this, it being the equivalent of a rate hike, the central bank’s incentive is to simply act in accordance with its mandate, which is to keep local price levels in check.

The complexity of all this could yet worsen. The days of a closed economy are well and truly over, and they deserve no nostalgia. The pegs and re-pegs back then were not just jerky, they were almost entirely arbitrary. Contrary to canards, our Midnight’s Currency of 1947 was not one rupee per dollar. The rupee was pegged to the pound sterling, and going by the rates that prevailed at the time, this worked out to about 3.30 per dollar. It fell below 4 later, in line with the British quid, but the big shock of that era was Indira Gandhi’s mid-1966 move to knock it down overnight to 7.50.

In the West, the Bretton Woods deal of 1944 on fixed rates came apart in 1971, the year America declared its dollar free of gold as an anchor. India gave up its peg 20 years later, letting a dynamic rupee adjust the country’s external payments scenario on the fly, a policy that has acted as a safeguard against the sort of disruption that hit Southeast Asia in 1997.

Currency pegs are not only passé now, they are seen as downright dangerous in an age where capital knows no borders.

The trouble is that the good effects of an open currency bazaar are overwhelmed rather too easily by vast sums of hot money flitting in and out of stocks and bonds and other such assets. It happens at the speed of a screen swipe nowadays, spurred perversely by the US Federal Reserve’s extraordinary policy of super-cheap money, a second seven-year phase of which is expected to reach its itchy end anytime soon.

Given how globalised India has got since 1991, bouts of currency chaos are only to be expected. In aid of the economy, however, it may not be a bad idea to nudge the rupee along a little bit.

Would India get labelled a ‘currency manipulator’ (a la China) for this? Not so long as it works and our motives are spelt out with due clarity. That’s my hunch. After all, it’s in the rest of the world’s interest to see India’s economy emerge as fast as it can.