Rajan’s Symphony No 0.5 in Alpha Major

The sforzando of Raghuram Rajan’s music is his half a percentage point rate cut, a dramatic easing of credit that could be just the stimulus India’s economy needs 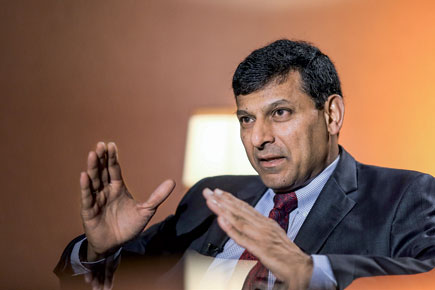 “My name is Raghuram Rajan and I do what I do.” The words sure sound musical, as if imbued not just with defiance of an identity imposed, but also a subtle sense of humour in the old echoes they seem to invoke. Indeed, if governorship of the Reserve Bank of India is not a divine role, it’s not avian either. Exasperated in the past by the media’s ‘hawk’ tag for him, Governor Rajan had once declared himself neither a hawk nor dove, just an ‘owl’: ever vigilant on the Indian economy. Now he doesn’t want to be called anything at all. Just somebody doing his job.

Rajan’s wit, though, was just an accompanying theme. The sforzando of the music, the dhantanan part of his monetary policy as it were, was the half a percentage point cut in RBI’s repo rate, to 6.75 per cent, the most dramatic easing of credit ever executed by the central bank at the sway of his baton.

It happened on 29 September, an orchestral manoeuvre with Dvorák’s sense of pep. On cue, commercial lenders have promised to translate the cheaper money available to them into lower rates of interest for borrowers large and small. Policymakers in Delhi and industry lobbies everywhere have welcomed the rate cut with long sighs of relief, some of them rubbing their ears in disbelief. Such was Rajan’s reputation as an eyebrow-knit inflation watcher—okay, let’s be blunt, hawk—that few thought he’d ever give India Inc such a big dose of adrenaline no matter what the circumstances. As his critics discover, cautious though he is, he is not curmudgeonly. Data in favour of such a move has been staring at the RBI for several weeks now. With the RBI well set on its ‘glide path’ of a retail inflation figure no higher than 6 per cent by January 2016, it was time for a credit boost. “The bulk of our conditions for cutting interest rates have been met,” Rajan said, expressing satisfaction with having got inflation under control. Last checked, the figure was safely under 4 per cent.

That it’s such a major surprise will actually make it more effective. Pulses have reportedly gained pace in many a corporate corridor as investment plans are put under new lenses of optimism. Access to loans on easier terms would mean that debt-funded startups are viable on lower rates of return; a low-rate regime is good for enterprise. For companies already in operation, less money to pay back eases financial pressure and frees up cash for other purposes. And then there’s the consumer market impact as well. Lower EMIs rouse demand for all sorts of things. Orchestrated by market forces, all of this generates myriad self-reinforcing feedback loops, each acting on another, for the economy to expand faster and faster. Done well, especially if there is plenty of productive capacity ready to get whirring (or easily commissioned), such a stimulus can achieve rapid results. The uncertainty, as the Governor points out, stems from the weakening of the global economy—“No country is an island,” in his Donnesque words—which only adds to the urgency of aiding an upturn in investment with a credit boost.

Yet, if there’s a grand legacy Rajan would like to leave India’s economy, my bet is still on the RBI’s conquest of inflation as a threat. He has made it clear that this cut has been done only on the conviction that his January target is all but sure to be achieved. In his scheme of things, by the end of 2016-17, retail prices should be rising by no more than 5 per cent, and by the year after, no more than 4 per cent.

That appears to be the central bank’s final target: a ‘low and stable’ rate which, held steady for decades together if not in perpetuity, could lay the foundation for an economy that has everybody at an advantage. The country’s worst off, those who struggle to make ends meet, would have the most to gain. It would make space for a low-rate regime that’s not at risk of financial flux, allowing businesses to make rupee calculations for the long term without worrying about what the currency’s future purchasing power would be. And once the RBI’s hold on price-levels gets the confidence of investors globally, at least ‘macro risks’ would not deter investment in a country that has just gained the distinction—for the first half of 2015— of being the world’s top FDI destination.

Sceptics say that’s just a daydream in a country beset with all sorts of supply problems that are beyond the reach of textbook tools. Inflation, they argue, is pointless as a precision target. The debate is far from settled, but given the sound of Rajan’s approach, it’s sure worth a try.

Rajan’s symphony has only just begun. Let’s hear the rest of it.