And the agonies of an addled market 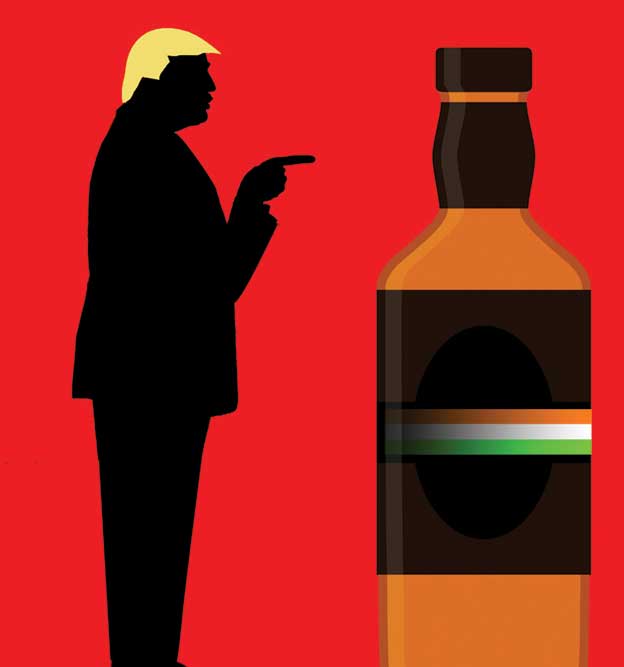 NOW THAT US President Donald Trump, ever more wobbly over walling off the land of liberty, has reached for his holster to glare India’s whisky tariff barriers down in the name of ‘reciprocal trade’ (“India gets 150 per cent,” goes his grouse, “we get nothing”), it’s time to slap foreheads and roll eyes as usual, but also ask why Delhi has been so slow in opening up the domestic market for liquor to global competition. No discernible national interest is served by shielding it, nor do American brands have much hope of swamping an arena that has rivalry enough of its own.

What seems to have caught the eye of the White House is the new world order of whisky volumes. Four of the planet’s five top sellers are Indian. With annual sales estimated at over 290 million litres, Officer’s Choice is the biggest by far. With about 255 million litres quaffed down every year, McDowell’s No 1 is ranked second. At around 170 million litres, Johnnie Walker Scotch vies with India’s Imperial Blue and Royal Stag for third place. America’s favourite whisky, Jack Daniel’s, is no longer among the big five, and its much-ballyhooed bourbon Jim Beam is nowhere close.

To a man with a sling at his waist, though, everything looks like a target; which might explain American fantasies of Indians sozzled silly by Jack and Jim flowing freely into a 1.8-billion-litre market. Yes, it’s almost half the world’s total, but the devil’s in the details: booze sales in India are infernally price-sensitive. At roughly $5.5 for a 750-ml bottle, for example, Officer’s Choice retails here for a fifth of the money that Jack Daniel’s does in New York. Even if granted duty-free access, American brands would only find themselves doing what they do anyway: fight Scotch, that is, and that too for just a sliver of India’s whisky pie. Imports account for less than 36 million litres a year, an itsy-bitsy share that could double or treble if local prices were to halve, but that’s about it. Clearly, Jack and Jim would be better off aiming for a casual niche of upmarket consumption by casting Scotch as the uptight choice of Raj-hungover elders, even as Indian Made Foreign Liquor (IMFL) labels retain a vast bulk of all that goes down throats.

At least that’s what rivalry gurus would probably advise. In Michael Porter’s formulation, gaining a competitive edge calls for focusing on either a niche or mass market while trying to hawk either the cheapest or most sharply differentiated stuff. Ambitious marketers tend to opt for the latter, since selling an intoxicant as something special could command the sort of consumer loyalty that spells extra profits, though some also try to crush costs while at it as part of a double-edged strategy.

Theory, though, doesn’t always survive contact with reality, especially not in a mass market as restive as India’s. As IMFL executives attest, it defies all market models. Edges get blunt, pros turn into cons, and cons into bestsellers. But model the market, analysts still must. Consider, say, an old blend that traces its origin to the oak casks of a Scottish clan once liberally admired for the finesse of its fluency but pushed into scraping the barrel under the onslaught of a spicy single-malt rival, one spiced up by crocus threads and aimed at a sigh-of- the-oppressed segment that has expanded furiously in recent times. Such an arena would presumably be led by the brand that’s clearer about the appeal of what it has to offer.

Alas, intoxication rarely lends itself to clarity. Oh no, not with preferences in such a royal state of flux. And once each brand confuses its game with the other’s, neither can work out how to pitch itself. The old blend is tempted to highlight just one malt, while the single-malt goes all out for barrel scrapers. In a market as muddled as this, which of the two would an investor bet on? One approach would be to assume that addiction makes for consumer captivity, and the spicy option will always have a more reliable advantage on this. Another way to look at it would be to ask if the allure of that heady spice hasn’t begun to get eclipsed in popular perception by the extra cost endured—say, the extreme harm done over time—in contrast with the bland but relatively harmless blend that has little beyond the distilled wonders of diverse inputs going for it.

It’s just a model, admittedly, but it’s still worth some thought. Are people really getting cost- conscious in anything other than myopic ways? Nobody knows. And that’s why nothing can be counted upon in an addled market. Blame it on ‘the affluence of incohol’, in the impish words of The Economist.