Calm After the Rage of Evil

‘Europe would need a common enemy to unite and the only one available is Islam.’ Is André Malraux’s prophecy coming true? 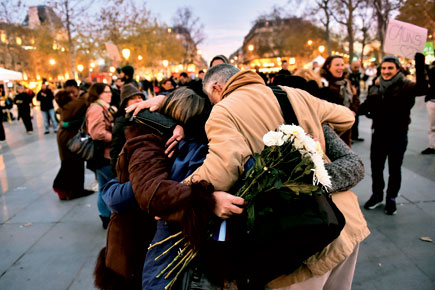 “Paris je t’aime (Paris, I love you),” murmurs an elderly woman, as she lays a bunch of yellow flowers on the makeshift memorial near the Bataclan, the concert hall located at 50 Boulevard Voltaire in the 11th arrondissement of Paris, scene of the biggest carnage (89 dead), on 13 November last, during a concert of the American rock band, Eagles of Death Metal.

How is Paris recovering from the trauma? Pierre Yves, a senior Paris advocate who teaches law in the famous French university of Assas, says, “I see anguish in the eyes of many of my students. There is a great emotion here—it’s the first time that the youth of France have been targeted by jihadists—and they just do not understand what they’ve done wrong.” True, that night happily dancing in the Bataclan were the flowers of Parisian youth: French as well as foreign students, Muslims, Christians, New Age converts, most of them in their twenties.

Many French youth have also started asking questions that are not directly linked to the Paris attacks, but have a bearing on them. Samarpan Nag, for instance, a banker, has noticed that many of his Muslim friends are worried because their children seem more and more radicalised. “Many Muslims in France are secretly scared that their children will run away and join the ISIS or Daesh in Syria,” he says. As a banker who looks at numbers and statistics, he also finds that “some of us are beginning to realise that we are paying a price for the cheaper gasoline that we get, because of our pampering Saudi Arabia and our pro-Palestine policies—at the expense of Israel”. Samarpan also questions the Muslim presence in French football, which is increasingly sponsored by Arab money—Qatar in particular, which exports Sunni Wahhabism. “Not only [do] our French Muslim footballers refuse to sing the La Marseillaise (France’s national anthem),” he declares, “even after the 13 November attacks, none has openly condemned them.” Samarpan is also, like other Europeans, worried about Turkey’s proposed entry to the European Union: “The Caliphate always dreamed of conquering Europe, but could not because of courageous European kings—and now we are inviting them in our midst.

Indeed, Samarpan raises an important point and we need to stop here and look at the history of the Balkans, particularly of Serbia, which is essential to understand the present struggle of today’s Islam with Europe. As noted by The Independent’s Tony Barber, a specialist of the Balkans, ‘The Serbs are Orthodox Christians whose religion was crucial in keeping alive their national identity during almost four centuries of Ottoman Turkish occupation. Of the nations that formed Yugoslavia in 1918, the Serbs were alone in having liberated themselves from foreign rule and set up an independent state in the 19th century. Undeniably, the Serbs resisted and paid the price against Muslim invaders, especially in the 14th century. On June 28th, 1389, a huge battle was fought at Kosovo Polje (which means ‘blackbird fields’ and also ‘fields of death’), between Serbians and mostly Turks of the invading Ottoman Empire. Although the Serbs were defeated, one of them managed to kill the Turkish Sultan Murad, before being slaughtered by Murad’s bodyguards. The Serbs never forgot the sacrifice of their ancestors, and on June 28th, 1989, on the 600th anniversary of the Battle of Kosovo, over a million Serbs, 10% of the nation, made a pilgrimage to the ‘Blackbirds’ field.’

‘It is a fact that under Ottoman rule,’ writes Tony Barber again, ‘many Serbs and Croatians converted to Islam. In Bosnia, for instance, there were 45% Muslims, Serbs were 32% and Croats 17%. During the Balkan wars, fought between 1998 and 2002, the Serbs, who never forgot 4 centuries of Ottoman oppression, expulsed Muslims and parked them in concentration camps, in an effort to make the regions purely Serbian.’ This policy of ‘ethnic cleansing’ is actually responsible for the first huge wave of Muslim refugees who flooded into many European countries. As a consequence too, NATO and the US helped dismember Yugoslavia, forgetting that it had always been the bulwark of Europe against Islam. Today the refugees who come from Syria or Afghanistan still transit through the Balkans, and Serbs are viewing this with apprehension. Even tennis star Novak Djokovic, an ardent Serb nationalist, often uses the three- finger Serbian salute, which means, ‘Help us God, against our enemies.’

The French Jews are probably as worried as the Serbs. “Just like in the late 1930s, just before the Second World War, there is a tremendous increase of anti- Semitism in France, which is fuelled by all those Muslim intellectuals, artists, rappers. We don’t feel safe in France anymore, especially after the 13 November attacks, and many of us are seriously thinking of emigrating to Israel,” says André Cohen, a French Jew.

There is also an important French Tamil community in Paris, many of them living in the 10th arrondissement where the attacks took place. Arumugam, a young student, whispers, “Maybe now the French and the Americans are going to have a little more sympathy for our country India. We have been suffering for decades from jihad attacks, and in Kashmir, Hindus were chased out of their ancestral lands and became refugees in their own country. Obama and nearly all French presidents, including Hollande, have put pressure on India to negotiate with Pakistan on the subject of Kashmir, which is not fair.” And he adds with a smile, “There is a separatist movement in Corsica, but France rightly feels it is an integral part of its territory. France has also recognised Tibet as belonging to China. Why can’t the French accept that Kashmir, where we saw the birth of our Shaivism, is Indian, especially after these Paris attacks?”

What about Belgium, where the search for the eighth elusive man, Salah Abdeslam, goes on? French authorities have said the wave of assaults on their capital was organised in Belgium, with jihadists taking advantage of intelligence gaps and the absence of border controls between the two countries to slip into France undetected. Abdeslam is thought to be using a support network in Belgium to avoid being captured, more than a week after an international arrest warrant was issued for his arrest in connection with the Paris attacks. Some Belgium citizens however speak of a backlash from Belgium’s ruthless and sometimes bloody colonisation. “We are such a small country,” says Albert Ducroux, a human rights activist, but look at our King Leopold II—he is responsible for the death of half of Congo’s entire population (around 10 million). Within 30 years of Leopold II coming to power, all but two African countries were conquered by the Europeans, which is shocking when you hear that prior to Leopold all the African countries were free.”

Patrick Sigal, a Belgium national and an antiques dealer who shuttles between Brussels and Paris, has a different outlook, although he admits, “It’s a dreary atmosphere in Brussels, a ghost town with a feel of nearing an ‘Apocalypse Now’ with hundreds of soldiers in masks with huge machine guns.” Yet on Monday, 23 November, when the whole city was nearly shut down, the weather was perfect and a few bold shops started decorating their display windows with Christmas artefacts, which Patrick saw “as a sign of hope that this madness will go away”.

There are still those intellectuals and writers who are careful to temper emotions. Olivier Germain-Thomas, a famous French writer and winner of the Prix Médicis (one of the highest literary prizes in France) who has penned many books on India, among them La Tentation des Indes (‘The Temptation of India’), feels, “We are calm, we are hopeful, we continue with our lives and we need to trust our French Muslim community which has openly dissociated itself from the 13 November attacks.” He adds, “We have to stay united, which is a rare virtue in France, and go for the roots of this evil—which is armed Wahhabism.”

And he is right, there is no doubt that Muslims in France are here to stay. The mother of the French Muslim paratrooper who was killed in Toulouse by Mohammed Merah, another jihadist, appeared on French television to say how she was horrified by the 13 November attacks. “This is not Islam. I am a Muslim and ashamed of these people. They should be eliminated.” And it is true. Muslims today are such an intimate part of French society that most of the time you cannot distinguish them from the rest. Salim, a young Muslim, says, “I am French. France is my country. I love Paris too and my heart bleeds when I see the horror which is done in the name of our Prophet.”

But the big question for Parisians is how to avert future Islamist attacks. Violette Dumont, a businesswoman from the fashionable 7ème arrondissement, has an unusual answer. “We need to dry up their funds, by bombing the oil fields they control as well as the poppy fields they cultivate for opium. America and Europe have to stop selling arms to the groups fighting Bashar al-Assad in Syria, and lastly, we need to infiltrate their groups. It’s long-term work, but it has to be done.”

Says another Parisian, François Barot, a retired computer engineer, “It is essential that the Americans drop their big ego and collaborate—taking along their European allies—with Russia in its fight against ISIS. From the beginning, Russia has been the only country which had the guts to call a spade a spade, knowing that the US and Europe are against Bashar al-Assad, because he is hated by many French and British Muslims.” The recent downing of a Russian fighter jet by Turkey seems to have complicated matters further, as Turkey has so far been on the side of the US, which has air bases there. “Does it mean that Turkey, because of the Kurd problem, is switching sides?” asks Barot. “We also know that most of the jihadists enter Syria through Turkey, which turns a blind eye.”

What is sure, however, is that the days of carefree Schengen visas, where one could travel freely from one European country to another, are over. “You can expect a return, at least for some time, of barriers between each country, the checking of passports, the searching of cars. It’s a big blow for Europe,” sighs Barot.

But many Europeans and French citizens will welcome this tightening of borders to stem the flow of not only jihadists, but also refugees, as, whatever the media and the politicians say, the mood of France’s ‘classe moyenne’ (middle class), is slowly turning anti-Muslim. Many also feel that the bombings by French fighter planes are too little, too late. “Our politicians have lost the guts to fight real terrestrial wars, where casualties happen,” says Marc Teillet, a commander of Air France, “But ISIS will survive bombings, and only a coalition ground force will flush them out for good.”

Finally, there is link doing the rounds on French Twitter and Facebook, which quotes many of France’s writers, poets and philosophers, from Voltaire, one of France’s greatest philosophers who wrote ‘the Muslims are animated by a rage to do evil’, to Tocqueville, America’s guru who exclaimed, ‘The Koran has not only religious edicts but also criminal laws.’ Yet, ‘le mot de la fin’ or the end word, comes from André Malraux, writer- revolutionary-politician, who had this to say: ‘Politically, Europe’s unity is a mirage. Europe would need a common enemy to unite and the only one available is Islam.’