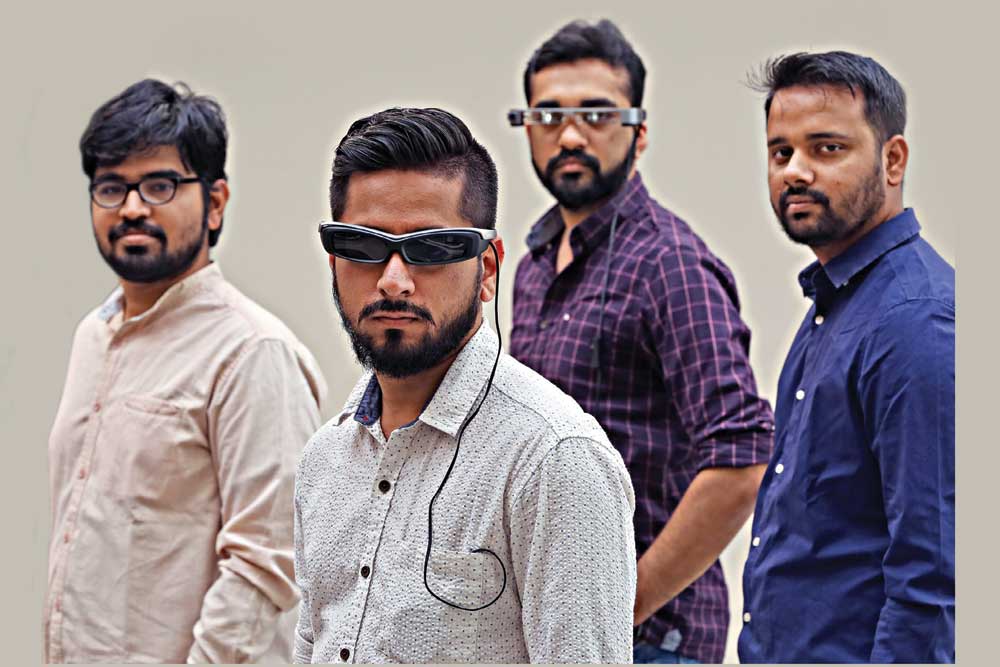 Last October, Hindu Sangharsh Sangh Sena District President Vipin Sharma was gunned down in broad daylight in Amritsar by a bearded man in a turban. This March, a joint team of the Organised Crime Control Unit of Punjab Police and Jalandhar (Rural) Police nabbed gangster Saraj Singh Sandhu from Bidhipur railway crossing on the Jalandhar-Amritsar national highway in connection with the crime. At the time of arrest, Sandhu was without a turban and an uncovered mop of hair gave him the appearance of someone who could blend into a crowd. Sandhu confessed to the crime, including several others, and Punjab Chief Minister Amarinder Singh congratulated the Punjab Police. He should perhaps have offered a salute to Staqu as well. After all, it is Staqu’s proprietary software embedded with speech, image and text-recognition algorithms that aided the police in their five-month quest to trace the suspect and identify him.

Staqu uses Artificial Intelligence (AI) to crack crime, but its services are being lapped up not only by security agencies, but retail and financial services as well. The 32-member team of this AI startup works out of a three-storey mall on Gurgaon’s MG Road, and while it can chase down criminals, it also guides online retailers on getting customers to buy an outfit they may have spotted on a film star, for example, in a viral video. Digital identification holds the key. Though crime solving came up as a business opportunity only last year, Staqu has been using its recommendation software to help businesses reach out to consumers minus the deluge of unsolicited data since 2015, when its four co-founders—Atul Rai (CEO), Anurag Saini (CTO), Pankaj Kumar Sharma (Vice- President, Engineering) and Chetan Rexwal (Vice-President, Product)—got their act together. Atul Rai was the leader of the pack. Armed with a Master’s in AI from University of Manchester and having worked in its School of Materials, Rai submitted his thesis on removal of noise from 3D X-Ray imaging. It took him to the University of Szeged in Hungary, where he learnt how to create a 3D image from distributed mobile cameras. All his learning came from handling data— image, speech and text. “If data are large and non-linear, big data kicks in,” says 30-year-old Rai.

India’s diversity presented the quartet with exactly what they were looking for, “where exists multiple dialects in the same language”, says Chetan Rexwal, 28. There was enough rich data, and more, all jumbled up in a heap of asymmetrical transactions calling for some order. “How do we make sense of the Hindi spoken in Haryana, UP and Punjab, which are so very different from one another?” asks Rexwal. The four co-founders sniffed an opportunity in e-commerce and set up shop in 2015 with their ‘recommendation’ products to e-tailers, such as Yepme, Roposo and PayTM Mall. Staqu’s software also came in handy for smartphone makers, and both Karbonn and Lava deployed it.

Along the way, several improvisations dotted Staqu’s course. It launched a direct-to-consumer app, for example, that would let users locate any piece of attire and its comparative price across multiple e-commerce websites seconds after spotting it in a film video (a version of its tool for e-tailers).

Product discovery is one thing, criminal discovery quite another. “In 2017, a mob lynching took place in Alwar and we realised that facial recognition was necessary to solve that crime, which involved multiple suspects,” says Pankaj Kumar Sharma, 26. So Staqu’s rank and file acquired a list of 200 suspects from the Alwar police along with a video that gave them a universe of about 500 suspects. Upon matching the suspects with their AI-infused software stack, the Staqu team was able to pin down the perpetrators of the infamous Pehlu Khan murder by cow vigilantes.

Today, Staqu is a favourite among police departments countrywide that have long struggled with technology. The Centre’s seven-year-old Crime and Criminal Tracking Network System, a criminal database shared with multiple police forces, proved a non-starter with a mere 30 per cent of it in the digital domain. Besides, police officers down to the district level have their own lists of history sheeters. Special Task Forces have their own lists, as do prisons. “We integrated all such lists and came up with an app called AI-Based Human Efface Detection in May last year,” says Atul Rai. In Alwar alone, he claims it has been able to pinpoint 400 criminals so far.

Alongside search and registration of criminals, Staqu’s success with ‘gang analysis’ of data from cops gave it newer clients: the police forces of Uttarakhand, Rajasthan, Punjab, Uttar Pradesh, and now Telangana, Bihar and Jharkhand.

This January, Staqu’s AI-powered predictive policing technology was selected by the Dubai Police from solutions of over 677 other startups. “The Dubai police wanted to integrate AI with their current programmes and databases in order to leverage analytics and statistics to support the decision- making process,” says Rai. The startup will assist the emirate’s police in identifying criminals and ‘predicting’ criminal activities based on heuristic data. Staqu’s solution also proposes to enable the police to detect falsehoods and ensure quicker response times during emergencies.

The global surveillance software market is estimated at $19 billion, but the firm’s focus is on India. Since 70 per cent of crime here is repetitive, AI learns from the data of registered criminals and assists the police in nabbing them. Across prisons, Staqu’s new software, Jarvis, promises to enable jail staff with real-time video streams and instances to accurately pin down troublemakers. And where did the name Jarvis come from? “Well, Iron Man’s AI-assisted armour is called Jarvis,” says Rai, a superhero and Game of Thrones enthusiast with rooms in his office bearing names like Winterfell and King’s Landing, places straight out of the fantasy television show.

Staqu has lately ventured into supplying the Indian Army with AI-equipped surveillance software. Rai contends that Army procurement is confronted by a Hobson’s choice, since intelligence equipment is invariably of Japanese, Israeli or Scandinavian origin. “For matters of the state, homegrown [suppliers] should be preferred, but until we came along, there were hardly any domestic players.” Bengaluru- based Tonbo Imaging and Delhi’s Cron Systems are some of the other AI-based startups in the defence space.

In the Indian private security market, where camera grabs are often unreliable, Staqu claims it uses AI to keep an especially close watch—not just of violence but also to check trespassers and kleptomaniacs across India’s retailscape.

The startup is also supplying AI-powered smart glasses to security agencies, whose personnel need to stay on high- alert during public events but don’t have any mechanism to scan a crowd and get real-time information on the background of those present. “We are aware of how a criminal in disguise may cross a police check-point unnoticed,” says 28-year-old Anurag Saini, “Our technology solution tackles these limitations.”

To come up with this technology, Staqu’s team used the inbuilt camera of smart spectacles to take high-resolution inputs of assorted faces in a gathering, the irises of their eyes in particular. This information is then streamed wirelessly to a central security hub, which sifts through vast loads of data from security records of criminal details to alert the wearer of the glasses if a match shows up. As in the movies, such suspect alerts appear as an image cast onto the inner screen of the glass for only the wearer to see—and act upon if need be. All this happens in real-time, of course, even while the event proceeds as planned.

Advanced technologies such as machine learning, deep learning, facial recognition, etcetera, are in play in the background. “In fact, our AI-based predictive policing technology can be integrated with CCTV cameras and devices in smart cities. This will help police forces take proactive steps in controlling crime rates and nabbing absconding criminals,” says Rai.

As far as the competition goes, Staqu has few to deal with worldwide: Palantir in the US, Sense Time in China, and Cortexica in the UK. Among these, it is only Sense Time that is foraying into similar segments of the market, globally, and perhaps the only unicorn in this space with a war-chest of over a billion-and-a-half dollars. For Staqu, as its applications widen, so do challenges of sustainability. The problem has never been technology but maintaining its growing breadth of operations, according to Rai. Today, about 30 per cent of the startup’s business covers security while the majority deals with recommendations. “But considering the high growth we are clocking in the security business, the split can change [in the future],” says Rai.

So far, each of the 32 individuals who work for Staqu seem to have their work cut out in the company, as do the co-founders, with Atul Rai leading from the front, expert coders Chetan Rexwal and Anurag Saini perfecting the company’s apps, and Pankaj Kumar Sharma working on server development. Strong network infrastructure is essential for Staqu to be able to work with the large volumes of data needed for its various services to get the job done.

The startup ran on bootstrap funds for a year after its inception and received its first round of funding—Rs 4.5 crore—in 2016 from India Angel Network. Prior to that, its co-founders say they constantly had to make hard choices when it came to investing in technology or spending on gaining business to raise its revenues.

But now, having digitised Indian crime records and created an app that can be used even in far-flung rural areas without an internet connection, Staqu is aware that it has something significant going for it. In just about a year-and- a-half since it commenced operations in the security market, Staqu claims to have already solved 400 cases.

The ‘precog’ (precognition) cops of Steven Spielberg’s Minority Report (2002), with all the controversy they stirred up over preemptive crime management, might have been science fiction, but the possibility of their existence was not in doubt. Staqu may not have perfected the art of stalling a crime before it is committed, as shown in the film, but big data seems to be edging ever closer to that reality.