A travesty of dissent as populism surges from Washington to Delhi 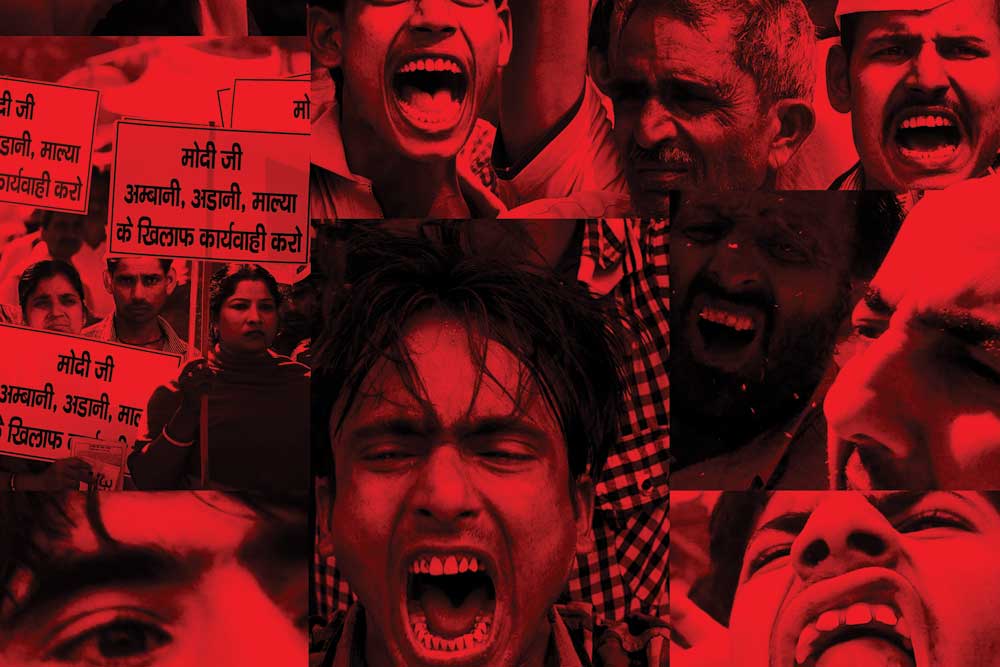 We’re all Trumps today. Or that’s exactly what professional anti-Trumpistas have become in their shrillness. It is as if the best way to confront the un-presidential president of the Benighted States of America is to borrow from his book: be more visceral than cerebral. Even hallowed media institutions known for their liberal restraint have declared war on the man who doesn’t belong here. Pitted against a president who tweets from the hip is the pundit who fires from the op-ed page. Set against his 140-character outburst is his inquisitor’s 800-word counter- outburst. Invariably, the difference is only in size and syntax. In the simulated mood of the Apocalypse, what we are witnessing is the last gasp of freedom, and what is in store for us is a racist, militarist, navel-gazing, insular, anti-woman, anti-immigrant, Slavic, world-weary America caught up in its own paranoia. Isn’t this picture scary?

It is not that the 45th president has done his bit to look benign—and presidential—once in office. It is Candidate Trump uninterrupted, keeping columnists outraged and pushing activists to the street. Winning the election may have vindicated his position on Beltway elitism, and his own version of apolitical politics. It has not lessened his grievance, or made him generous in his response to people who continue to disagree with him. Still, he feels he is an outsider, an idyll-breaker in Washington jeered by the Brahmins. The more he craves acceptance, the more he continues to be rejected as a parvenu. That makes him angrier, petulant, even vindictive. Which in turn makes his antagonists in the media and on the street equally Trumpian in their response.

These are alarming times, literally, and the new president loves to play the underdog. He did not campaign in poetry, and he is determined to govern in provocative prose. The media keeps him provoked. The portrait of the new president as Putin’s teddy bear is a good example of how tabloid journalism has taken over even the so-called legacy media. And then there was all that pornography featuring the would-be president and prostitutes published by a news website, which justified its action as responsible journalism. There is a new media activism—after eight years of media adoration—in America, and it’s fast evolving into a culture war.

Any polarised society needs a bogeyman, and there can’t be one darker than Trump, who, since his invasion of the guarded political space, trampled upon all the American ideals as the world understood them, ranging from immigration to globalisation. His aggression needs to be countered by civil society groups and, of course, the media. Does it mean that his aggression should be copied by his critics, that a divided country argues only in an echo chamber? Protest today is either a spectacle or a stereotype. The women’s march after the Trump inauguration was spectacular, but, in essence, wasn’t it a gender- specific variation of Black Lives Matter? These protests are not curated by party politics; they are propelled by social identities. As the New York Times columnist David Brooks writes, ‘Without the discipline of party politics, social movements devolve into mere feeling, especially in our age of expressive individualism. People march and feel good and think they have accomplished something. They have a social experience with a lot of people and fool themselves into thinking they are members of a coherent and demanding community. Such movements descend to the language of mass therapy.’

It is Gandhian conservatism that powers Modi’s modernisation project. In demonetisation, as demanded by a ruler with no interest in personal wealth, the poor have joined the rite of sacrifice in a war against the entrenched financial elite

In Trumpian times, the therapeutic pursuit has reached hysterical levels. For the unsettled liberal, the Trump ascent is a historic moment to measure his own humanity, to put himself above the unrefined class on the warpath. During the campaign, anti-Trumpism was entirely built on effect, not cause. There was hardly any attempt to understand or explain why—or how—a plutocrat had become the rallying point for the White underclass, Hillary Clinton’s ‘basket of deplorables’. While getting repulsed by the rich, ugly American, they missed the social, economical and cultural balkanisation of America. As alienation bred apolitical extremism, the alternative was bound to emerge from the deepest chasms of resentment. Paradoxically, it took the chutzpah of an impulsive, narcissistic billionaire to channelise the resentment to an establishment-rocking movement. There is no humility in Trump, even in power, and no humility in anti-Trumpistas, even after democracy’s verdict.

What we have is hysteria, which is being packaged in an overabundance of self-righteousness as dissent. A great tradition in freedom is being ‘popularised’ as a struggle against authoritarian temptations. Dissent, as the original rejoinder to the lies of the state, as written—and shown— by Havel, is about ‘living in truth’. The Gandhian experiment with freedom is one of its heroic sagas. Elsewhere, in the struggle against communism, every story did not have as happy an ending as the Havel-led Velvet Revolution: no philosopher survived the jackboot to become king. Dissent, at its liberating moments, is the expression of a moral system, not a repudiation of reason, nor a carnival of social grievances. Dissent without civility is as crude as, say, Candidate Trump.

Does it reveal the frustration of the displaced? There is a populist surge across the globe, defying traditional battle lines of ideology. As John B Judis says in The Populist Explosion: How the Great Recession Transformed American and European Politics, arguably the most persuasive analysis of the phenomenon, there is no single trait that unifies the disparate movements. ‘It is not an ideology, but a political logic—a way of thinking about politics.’ A populist can be from the Left or the Right. ‘Left-wing populists champion the people against an elite or an establishment. Theirs is a vertical politics of the bottom and middle arrayed against the top. Right-wing populists champion the people against an elite that they accuse of coddling a third group, which can consist, for instance, of immigrants, Islamists, or African American militants. Left-wing populism is dyadic. Right-wing populism is triadic. It looks upward, but also down upon an out group.’ Right-wing populism, Judis writes, ‘is different from a conservatism that primarily identifies with the business classes against their critics and antagonists below. (In its American version), it is also different from an authoritarian conservatism that aims to subvert democracy. It operates within a democratic context.’

Trump’s aggression needs to be countered by civil society groups and, of course, the media. Does it mean that his aggression should be copied by his critics, that a divided country argues only in an echo chamber?

It is this democratic context the newly displaced elites refuse to accept when they face up to Trump, a classical right-wing populist who has mobilised the ghettoes of middle America against the Establishment. Their rage against Trump, in the end, is feebler than the passions of democracy. Establishment, whether in America or India, rhymes with entitlement. Trump, the outsider, shattered the cosy Washington order, and the crassness of the orange man continues to rattle the liberal as well as conservative elites. As there is no difference between Candidate Trump and President Trump, much to the delight of the base, it is the same hysteria we have seen during the campaign that continues even after the transition.

Sounds familiar? Trump is not exactly Modi, but to some extent, their ascent shares the same logic of right- wing populism. Their political styles are vastly different: one an ascetic, the other an exhibitionist, one a cautious speaker (no Muslim or Mandir for Modi on the stump), the other a serial offender. Modi, too, was an outsider until he made himself inevitable to the party establishment. For a section of liberal India, his victory in the 2014 General Election is a historical error, and they won’t forgive history for that. The very idea of him as Prime Minister was a freak show for them; Modi is still an outcast in that constituency. For them, Modi’s India is defined by fear and submission, where an unwritten law of allegiance-or-damnation prevails. This is a wretched place, where the big bad god of Hindu nationalism keeps vigil, and where questions are banished. This is an artificial context, of course, and it is necessary to sell the text of ‘neo-fascist’ India. ‘Fascism’, by the way, is the most favoured word for a certain kind of Indian intellectual. It is the same ‘dissenting minds’ that cut history into user-friendly catchphrases such as ‘Holocaust’, thereby trivialising the original memory of dehumanisation. Modi for them is still a child of Weimar India.

Post-demonetisation, this portrait of Modi as an autocrat has become starker. There is still no attempt to put demonetisation in the context of Modi’s right-wing populism, which in its political content varies from the Western type. Initially, some of us were quick to see in him traces of an Indian Reagan. But in practice, it is Gandhian conservatism that powers his modernisation project. In demonetisation, as demanded by a ruler with no interest in personal wealth, the poor have joined the rite of sacrifice—very Gandhian indeed—in a war against the entrenched financial elite. For once, they, in spite of the initial hardship, knew there was no hidden agenda. The poor saw it as a fine expression of the politics of empowerment by a prime minister of renunciation. In Modi’s version of right-wing populism, the mobilisation of the underclass is made easier by his own life story, something that populists elsewhere could not achieve.

The protest against demonetisation, as the liberal war on Trump, has become a repudiation of the man rather than an informed argument against the ideas he spawned. In the vanguard of this protest is a displaced class that once enjoyed complete copyright over the left-liberal conscience of India. Even populists can redeem democracy— but the noise of hysteria can only demean it.