A Hymn to Hummingbirds

Is it the colour, the size or the frenetic lifestyle that defines the very loveliest things in nature? 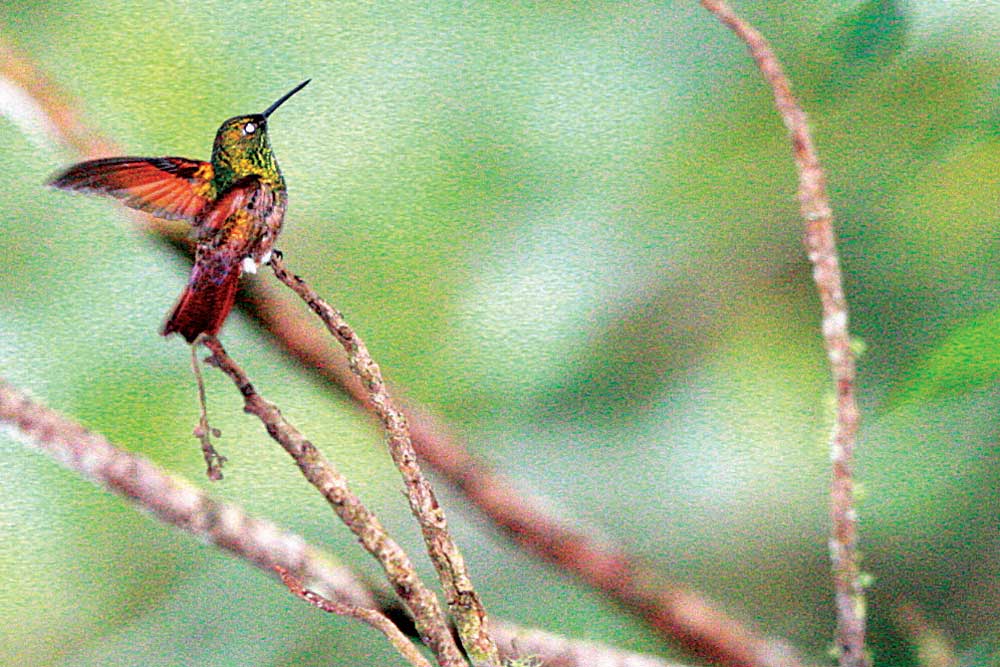 ‘THE STRANGENESS of India brought to mind that other strangeness; my own country,’ wrote Octavio Paz when he was posted in New Delhi as the Mexican ambassador to India in the 60s. Strangely, the strangeness of Mexico, when I was there last month, brought me back to the original strangeness; that of India. I was there the week the nation was celebrating the Day of the Dead. In the highlands of Jalpan, in the reverberations of Mexico City and in the quietude of Huatulco, I found that strangeness. Something quite different, and yet, the similarity, striking. Blue skulls stared at me with toothy grins, children screamed through water fountains lit with rainbow lights, and a street artist with a Mohawk did up the face of any passing tourist in ghoulish dyes. The patterns were Latin, but the colours were those of Holi. In the cobbled alleys of Jalpan, small shrines were being prepared by the roadside and in village homes, a quieter rural celebration that kept up the traditions without the clamour. In Pluma Hidalgo, high up on the coastal highlands of Oaxaca, children lit firecrackers under my feet, transporting me back to Delhi, November and Diwali. Women gathered marigolds in handcarts to be taken to the local market and sold. These would line the streets from their homes to the cemetery where their loved ones lay: to ensure that the souls of the departed found their way back home on the appointed day. Ancient rituals, interpreted over the centuries to bring solace to believers no matter what science teaches us. Mexico, like India, is bundled in that cloak of modernity worn loosely over tattered layers of civilisational triumph and decay. Man mirrors nature and the ‘strangeness-yet-familiarity’ of human endeavour must draw itself from a natural fount. Flitting through the landscape, reminding me of Old World nectar-feeding sunbirds that I see almost every other day in Delhi, were the very loveliest things in nature.

Hummingbirds, and here I am borrowing from the English author-naturalist WH Hudson, are that and more. Even their names denote exotic worlds in which only the most beautiful, the most perfect can exist. What other avian family can boast of Firecrowns and Mountaingems, Emeralds and Brilliants? Which other marvel can be bestowed with a name as dazzling as that of the Tourmaline Sun Angel? Which tiny jewel can lend its name to a mighty warrior—the Aztec hero Huitzilopochtli, loosely translated into ‘The Hummingbird of the Left’? Which creature can both be a Coquette and a Hermit; a Woodnymph and a Sylph? Who can blaze the skies like a Comet, splice the air with its Sabrewings and Sheartails and dip like a Sungem onto the waiting velvet sheaths of a nectar- dripping tropical bloom? Which bird has the temerity to weave its home from the silken gossamer of a spider’s web from where emerges a brood that tears the air asunder with wings that beat 200 times a second?

There was a magical twenty four hours in Mexico that yielded six of these jewels to me in one climb up from Huatulco on the coast to Pluma Hidalgo, a tiny mountain hamlet in the south western state of Oaxaca. The real McCoy was the endangered and endemic Blue-crowned hummer in the cloud forests of Pluma Hidalgo. They were right up in the canopy, most of them females but see them we did as we did a lovely male Doubleday’s hummingbird, much lower down, with a brilliant turquoise crown. There was a glimpse of the Golden-crowned Emerald, a female as well, and then many Ruby-throated hummingbirds, females too. So what is this about females then? “They migrate together and arrive here before the males do,” said Cornelius, our bird guide, apologising for the drab women of the female world. I am glad he did apologise for it was terribly frustrating to crane one’s neck upwards and watch tiny thumbnails of birds whirl around in maddening circles only to get the binoculars focused to see that the ruby-throated had a white throat and the blue-crowned had a dull green head. Females all, damn the hummer kitty party. The next two made up for the girls-only band though. First, the Cinnamon, nice spicy brown underneath and with a broad brown tail that fanned out every now and then. And then the Berylline, a beautiful green jewel with rufous red wings and tail, took off and made acrobatic twists near me, making the day an utter success. Especially as I got a couple of shots of the lovely Berylline in action—a terribly difficult feat indeed.

Hummingbirds are incredibly difficult to photograph because of the way they are built. Or you can take it up another level and say that they are difficult to photograph because Latin American flora are decidedly more willowy and wispy than their Asian and African counterparts. This presents the two different families of birds that decided to feed on their nectar in such similar strangeness with different challenges. The sunbirds (equally explosive in their colouration but with far better musical notes than the unfortunate hums and whirrs of the hummers) find a branch to settle on and then insert their long probing bills into the flowers to drink nectar. Or, if they find that the bill does not fit, they stab a hole in the base of the flower and suck out of it with their inbuilt straw. If they do have to fly, they do it for a few seconds at a time and then settle down on a branch. The hummingbirds don’t have that luxury. They have evolved to partake in the nectar from hanging blossoms. And so they have to hover and whirl. They do this by using an extraordinary wing beat, much like my rebooting my iPhone 6, only on a horizontal plane. Their wings beat a figure of eight, twisting 180 degrees and back again. The bird hovers, chopper-like and then takes off—up, down, sideways, front or back with equal élan and precision. All this has an evolutionary downside too. The birds need more sugar than almost any other living thing to be able to perform the aerobatics. Their nectar-filled diet allows them a high metabolic rate. They take in more than half their weight in sugar daily from more than a thousand flowers visited. And then at night they go into complete torpor approaching the stillness of yogic hibernation. Only that conserves its energy and rests its muscles for the next morning’s hectic tribulations.

THERE ARE 300 or so variations in this theme. All along the Americas, from cold Alaskan latitudes to colder Andean heights, from Amazonian rainforests to bird feeders in the largest city in the world, this family of ‘small birds’ (for that is the Greek etymology of their family name—the Trochilidae), seem to have conquered all that the New World has to offer. If there is a heaven for birdwatchers, it must be Bellavista Cloud Forest Lodge in Equador where there are nearly 30 species of these emeralds flying around. I flit back from such New World dreams back to my own strangeness. The one filled with sunbirds. But after seeing the hummers, why does the purple sunbird look so much larger and slower and clumsier? I wonder. Is it that the whirr in the wings of the hummingbird lets you feast your eyes on it so much less than one can with a sunbird?

Why are hummingbirds nature’s loveliest things then? Does the beauty lie in the name? Or their brilliant colouration, an iridescence borne from their twisted feather plumes that trap and reflect light in such peculiarly wondrous ways? Or in being the smallest birds in the air: the Bee hummingbird, the size of a large beetle, holds that record. Or is it in the alteration between a frenetic lifestyle in the day and the cool stillness at night that causes envy in a human voyeur? Is it that when it hovers over beauty, it teaches you to pause and take in the world in its many splendoured forms and when it whirs off, you realise the transience of life itself? It is perhaps a melange of all that and more that comes together so marvellously in what Brazilians so aptly call the beija-flor, the flower kissers.