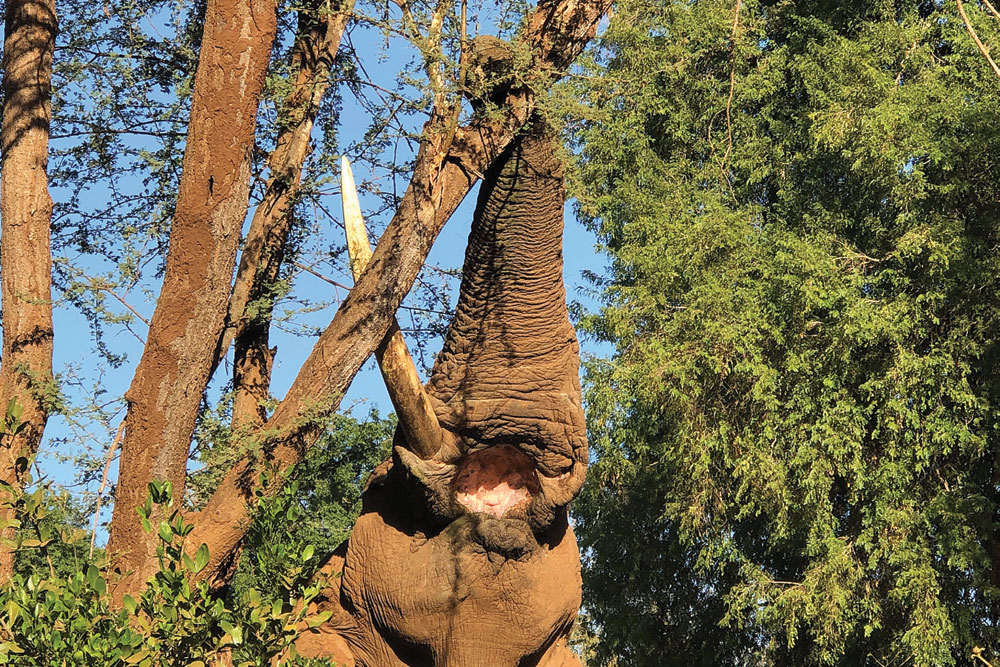 
IN PAFURI, the north-western corner of South Africa where the mighty Limpopo separates Zimbabwe and Mozambique from the vast wildlands of Kruger, four bull elephants held me captive for an hour, to tell me the story of their lives. It was entirely appropriate of them to approach me thus, as I was in the park discussing a project that was visionary in scale and substance concerning elephants, with the doyen of Southern African elephant science, Prof Rudi van Aarde and a dozen other conservationists. But more of that later. For, what is of pertinence here is that at 11 in the morning, half-way into the meeting, when I walked the long boardwalk back to my tent, I was not expecting to dwell on elephant matters. Around me and under the boardwalk, prettily striped Nyala antelope grazed unconcerned. A solitary African Wild Buffalo watched me warily and then crashed away into the undergrowth. Natal Spurfowl screeched as they scratched around for grub, taking them away from Arrow-marked Babblers that screeched back in consternation. In the flame bushes above me, little White-bellied Sunbirds tittered and frolicked among the orange blossoms and a stream of Red-billed Queleas or locust birds filled the morning skies as they flew over. It was a perfect morning in Kruger for a mid-afternoon cup of coffee watching wildlife.

The tent was placed at a slight bend on the river. A red mud bank sloped into the river on the opposite site where a pair of Pied Kingfishers waited patiently for a ripple betraying a careless fish. Sitting at my verandah with a hot cup of coffee, I had just started writing a piece I was working on. A pair of Egyptian Geese cackled noisily as they flew past, the most insistent of African noises save the Hadada Ibis. Suddenly, without warning, the yellow fever trees opposite me crackled and burst asunder as a troop of warthog burst through and running straight into the river, splashed right across the flap of my tent. My forest training made me stand up and scan the opposite side of the river with a binocular. A sudden sounder of pig running, could often mean a predator close on their heels. I have heard a jaguar ‘saw’ its rasping frustration as a herd of white-collared peccaries broke away from a hunt in Belize. I have seen warthogs run helter-skelter chased by wild dog in Kenya. And of course back home, wild pig often betrays the presence of the tiger when they smell and crash through the forest that you are walking on. But this time, no cat came behind the pig. Instead, striding singly, four large bull elephants emerged from the mopane woodland on the opposite bank and striding deliberately, waded into the river.

There was nothing unusual about this and I continued with my coffee and work keeping an eye on the elephants as they steadily approached my bank of the river. They were large, three clearly over eight feet at the shoulder and one giant, perhaps even over 10 feet tall. Sloshing through the wet muddy water and with generous sloshes of mud packs applied onto their thick skin had made them a gleaming red in colour. The lead bull stopped after ascending the bank of the river and looked straight at me. I was a mere 20 feet away but on top of a wooden deck. Surely, he would turn around and make his way into the river. Minutes ticked by as he appraised me, trunk swaying side to side, ears flapping lazily, his body swinging to the beat of his trunk. All the time his small eyes were fixed on to me. And then, slowly, deliberately, he moved forward and approached the tent.

I have known the Asian elephant rather proximately for over 30 years. In those years, I have been chased only a few times by bulls in musth. I grew up, however, learning that respecting elephants was a key to surviving a life with elephants. The tragic death of a head of a forest research institute despite his protestations that he knew his elephants has formed a part of the learning. I have lost three people I knew well to elephants. Taking a chance was not my style. I retreated inside the tent and latched it. I could still see him through the large netting of the open side flaps. He stopped only momentarily and then put a foot onto the wooden deck. In one moment he had hauled himself on to my front porch. The other three had filed out of the water by now and were in tow. I retreated further into the tent as his massive body clouded the room into a sudden darkness. He waited for what seemed an eternity, but was possibly three minutes and then stepped off the deck and onto the side of the tent. With a sigh and a rumble he broke a branch off a Fever Tree Acacia and started feeding noisily. The other bulls followed him. All-male bachelor herds are common among elephants and are mostly temporary association of younger males with one older male leading the group. Our study of elephants has shown this male-male bonding and passing of generational knowledge to be as important as matriarchal knowledge and wisdom that leads a herd. The older male had approached and smelt me out and it seemed as if he had passed on a message that I was kosher. Now the younger ones could also approach the tent and feed.

For the next 40 minutes, the elephants fed as I watched them from inside the tent. I was by now sitting on the edge of the bed watching the elephants but being very careful not to disturb them with any noise. Not that they were as considerate. At one point, they had me surrounded from all sides. When elephants feed at a couple of feet distance, the noise is loud and persistent. Branches were being torn asunder and bark being stripped off the tree in loud swooshes. The large molars, each weighing over a couple of kilos, crunched on the browse noisily. I have an old molar lying in my bookshelf serving as a bookend and at times I lift it only to feel the vast ridges with my fingers. My Asian elephant tooth is arranged in parallel ridges making it look like a stack of dishes stacked after washing in a plate holder. The African elephant molar has diamond-shaped ridges giving it the scientific name of Loxodonta. And I could see the molars now as the elephants opened their mouth to reach up and pull down a branch. Even more interestingly, three of the four tuskers possessed just a single tusk. The youngest had both tusks. Had the other three broken them off in battle, I wondered, or was there a gene for singe tusk? The genetics of inheritance of the tusk in the Asian elephant is even more interesting. In the Asian, only the males have tusks and only some males have tusks. In the African, both males and females have tusks. But certain population, such as the Ugandan one, has a higher proportion of tuskless elephants. In Asia, Sri Lanka has a higher proportion of tuskless males. Is this an adaptation to poaching pressures or is it a recessive gene? In these three giants feeding, I could not see a broken edge in any.

If I pressed my nose to the netting, I could smell their fetid breath, rank with the juices of the Yellow Fever Tree. Behind me one elephant had interrupted his feeding with a loud fart and I could hear the pit pat of dropping dung. So typically elephantine, I thought, to feed, excrete and then feed again in a never-ending biological continuum to maintain the gigantic frame that it had attained. One elephant had now stepped next to my outdoor shower and was rubbing his backside on it. The regular swish as it leaned forward and then back to rid its body of an annoying insect or perhaps just the drying mud by rubbing against the canvas was loud and repetitive.

Back in the meeting room, my colleagues would be conspiring to stitch together large landscapes for elephants. Elephants are big, social, intelligent nomads and for them to move from one habitat to the next movement, corridors were required. Equally to link one population to the other habitat, linkages had to be created. In Africa, it was still possible to dream of linking the large sub-Saharan elephant habitats. It was difficult but it was possible. In Asia, where two in seven people in the world reside, space is at premium. Corridors connecting a splintered habitat were the only possibility. What the elephants needed was a right of passage. Our organisations were trying to provide them this. In both worlds of Asia and Africa, the elephants were being hemmed into smaller and smaller places they can call home.

In the tent, I was the captive, deprived of my Right of Passage to the conference room. The elephants seemed at utter peace. Rumbles of satisfaction filled the air as they fed. To one who did not know elephants, this could be terrifying with four large behemoths surrounding a flimsy piece of canvas in which I sat captive to the situation. Instead I chose to reflect on the world in which these ancient beings lived today; their habitats ripped by linear infrastructure, their kinship fragmented by human-dominated landscapes, their loved ones killed on roads and rails by unfeeling, uncaring mankind. To have kept me, representing humanity, imprisoned in a gentle, non-threatening way was the least they could have done to raise the issue of their continued lives of attrition. I left after an hour, when the elephants had passed on their way, a little fuller in their stomachs and hopefully a little calmer in their souls after having rumbled their existential worries to an eternal friend.