Forest Baby of the Night

The secrets of the Malabar slender loris 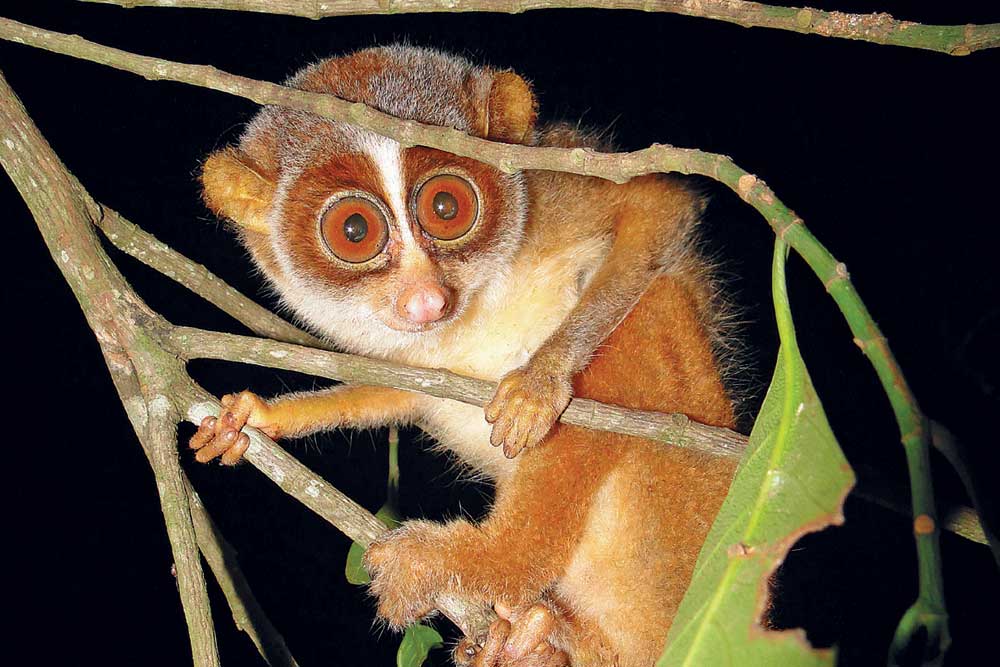 ‘SHE WALKS IN Beauty, like the Night/ Of cloudless climes and starry skies’—I had always thought that Byron was addressing a Greek damsel of his dreams until I met the loris one cloudless night in a small forest in northern Kerala. The loris is a night monkey of fairly ancient vintage. Their niche has been tried out evolutionarily by a host of creatures across the world. The bushbabies and galagos of Africa, the owl monkeys of South America, the tarsiers and lorises of Asia have all evolved to fill that night-primate niche left vacant by their larger diurnal cousins. Anatomically, there are similarities: they are all uniformly small and all of them have the most incredible goggle- eyes that maximise light capture. But that is where biology ends and the Byronian magic begins. ‘And all that’s best of dark and bright/ Meet in her aspect and her eyes/ Thus mellow’d to that tender light/ Which heaven to gaudy day denies.’ The Loris, of course!

There was nothing to do after that but to meet this lovely denizen of the southern forests. Of particular interest to me was the Malabar subspecies that lived on the western slopes of the Western Ghats. ‘We will walk after dark. Do bring your headlamps. I have red cellophane,’ texted the only researcher to have finished her doctoral dissertation on the Malabar slender loris, Smitha Daniel. ‘And come rested, or the elephants will smell your fear.’ Strange advice, I thought, if aimed at James Zacharias, Surendra Varma and me, a trio with more experiences with elephants in the wild than could be assembled together on any given night in Kerala. None of us, however, had any experience whatsoever on this endangered subspecies of the slender loris. Reportedly darker, supposedly found in wetter climes, purportedly with rounder eye-shadow. We assembled, as the half-moon flickered on, and walked almost in single file. Biju led, as any local forest staff should at all times. James brought up the rear. In front of me, Varma and Smitha walked two abreast deep in conversation. Varma is a constant cauldron of conservation thought, bubbling over whenever he has an audience. Smitha, brought into conservation by Varma, chittered like our quarry, eager to share years of her work. Was it that or was it a means to conquer the fear of the dark? ‘When one is alone at night in the depths of these woods, the stillness is at once awful and sublime. Every leaf seems to speak,’ wrote John Muir in his ‘unpublished’ memoir John of the Mountains. I could sense James of the Forest tensing up. He is still by nature, like a deep forest glade, stirring only when absolutely required by the most persistent of breeze. The hushed but constant talk of the duo in front broke his reverie, his soliloquy with the tangled vines. “Look out for elephants,” he whispered. The fact that two elephant specialists walked ahead of him seemed to scare him more. Russians have a wonderful way to describe the fear of an expert. ‘Beware the fool or the expert when it comes to picking mushrooms,’ they warn, for many a specialist had died of picking a wrong fungus because of sheer overconfidence. For a moment, two passages from the books of veteran naturalist AJT Johnsingh came to mind. One about the death of the experienced Dr Nair at the feet of an elephant he claimed he knew. James seemed to prophesise that fear. But then, Dr Johnsingh’s fascinating observation of the nonchalance of the Maldhari tribe when it came to walking amidst lions calmed me. The nomadic tribesmen talked continuously as they walked the Gir, he reminisced, and thus perhaps alerted the lions to their presence early on. Varma and Smitha were our early warning systems for elephants, although I hoped that would not affect the lorises. Dry leaves rustled first to our right and then to the left. A pair of mouse deer coughed discreetly and scampered away. As small as a hare, this minute cervid still populates southern forests despite the inordinate pleasures that the tribes of the region derive in hunting and eating it. Tonight the chevrotains brought a different pleasure: they were a harbinger of better things to come.

Within 10 minutes, Biju had excitedly leapt off into the tangled vegetation that bordered the forest path. Eanja and Karuthodal lianas twisted and swirled around the forest. Smitha had shone her red light on to the top of the lianas. Some 20 feet above us, there were a pair of eyes reflecting back. The form was barely visible as the brush was thick. “It is a female,” declared the loris girl looking up at the girl loris and Biju nodded vigorously. I could barely make out the animal. “The female clitoris is quite long and visible, the male penis is not,” I was instructed. I could still only see a huddled shadow, occasionally glinting downwards and then merging with the night. “Let us look for a different animal”; I did not want us to stay too long with one loris and disturb it. Back on the path, mouse deer skittered away again. Was it one animal moving with us, or were there many? I would have thought it was the latter, as they were being seen on both sides of the road. And then lower down another pair of eyes. “Civet,” said Smitha. “Brown Palm.” Another Western Ghat endemic and like the loris, highly range-restricted. A frugivorous being as compared to the insectivorous loris. Further afield, a porcupine peeped out of the shadows and sedately crossed the path. Within the hour, we had spotted another pair of eyes high up on the lianas. These creepers were possibly the most essential component of the loris habitat. They were almost always found on it, grasping the wood with both hands and feet. I had watched, many moons ago, the Mysore slender loris, a closely related cousin, feed on a grasshopper. There was something serene about the predatory movements of a loris. A calculated, deliberate stretch of a lanky limb and an even slower bringing of the prey to the mouth. A soft crunch and an almost gastronomic delight reflected in its refulgent orbs. But all that was most anthropomorphic. What I had not seen was what Smitha taught me about loris feeding. “It pees on its hands and then waits for ants to crawl on them; perhaps it kills their toxicity.” All lorises were known to pee and leave hand and foot prints on the vegetation as scent markers, but Smitha felt that they did that even to express disgust, or like in the case of the ants, while feeding. A fascinating little use of their liquid waste and most unique in the animal world, despite the ‘disgust situation’ that it would appear to us humans. But to see that or to observe a female loris hang upside down from a liana while the male mated with her right side up were all privileges of those who had spent years watching them up close and personal. For the night walkers of a single moon, a glimpse of the thevangu was enough. Thevangu is slang for a slender-bodied one in Tamil but the Kannada Kaadu-paapa is much more evocative. Forest baby. Round-eyed, round-faced, small-bodied baby of the night forests of the southern Ghats. Malayalis call it Kutti thevangu. Slender-bodied baby, a mixture of both the other names. Any of them has better etymological origins than ‘loris’, a Dutch derivative of ‘clown’ or ‘simpleton’. “Unda Kannan,” said James, “the goggle-eyed one.” Not complimentary, but perhaps the most accurate of the four.

The red cellophane on our headlamps made the bright light acceptable for the nocturnal loris. White light would have hurt its highly sensitive eyes. Now, even with four red headlamps shining bright, a loris revealed itself from atop an acacia climber. Slowly, almost mesmerisingly, it swung its head across its left shoulder and peered long at the gawking intruders. This set of animals were used to Smitha’s long years of research, but even then we felt we were intruding into their secret world. The night held its secrets away from a species that had evolved in the sun. Now looking back up the evolutionary tree, four diurnal primates gawked at a single primitive nocturnal one. We may have locked eyes for half a minute or so, but that moment had spanned 60 million years of primate evolution. We retreated, a couple of hours past midnight back into the rest house. The naked 40-watt bulb in the room burnt a hole in the red-lit memories of the night. Smitha beamed with pride at having shared her subject of enquiry with us. Her eyes shone bright and round like the object of her fascination. The Japanese psychologist Nakajima had shown that people could positively correlate owners of dogs with their pets by looking at sets of pictures. He further showed that it was only from their eyes that the correlation could be made. I looked at Smitha and saw her loris shining forth as she shared the last few details of this wonderful forest baby with us.

The morning drove all that was mysterious away from the forest. A troop of bonnet macaques, the common southern monkey commensal with man, replaced their secretive forest cousin. An orange-headed thrush scratched the undergrowth. Flocks of parakeets swung through the morning air, venting their anguish at an unseen foe. I could hear a shama whistling beautifully in the distance. It was all at once a familiar Kerala forest again. A bunch of excited school children were being led into the forest by Biju for a morning nature walk. They would be taught about birdsong and about the magnificence of forest trees. But the secret of the babies of the forest rested high up on the woody lianas, shrouded in the bright sunlight of a lovely winter morning.