How the palace menu reflects both personal choices and social realities 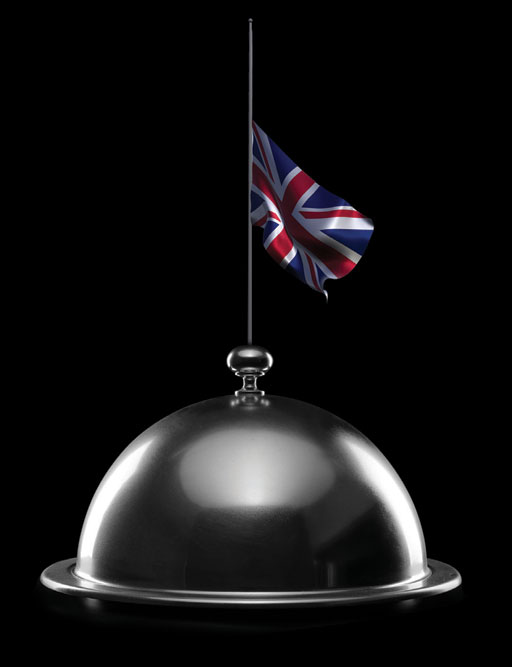 
QUEEN ELIZABETH II loved to eat Irish stew, kippers, and chocolate biscuit cake. She hated oysters, never touched a scone even though she insisted they be served with afternoon tea and fed them to her corgis, but could bake a little (her drop scones were so relished by the Eisenhow­ers that she sent them the recipe), disliked grapefruit, drank only Earl Grey tea, didn’t care for spicy food, and preferred simple meals. These are the titbits one gleans from the memoirs of her palace staff. In her eating habits she didn’t veer too far from her famous great-great grandmother, Queen Victoria who too was reputed to have simple tastes.

In The Private Life of the Queen written by a Member of the Royal Household in 1897, the anonymous writer gives us a glimpse into Queen Victoria’s private life—how she lived, the rooms she used, her kitchen, what she ate, and so on. Her tastes were simple and she always insisted on being served what was in season whether or not she ate it, just like Queen Elizabeth with the scones.

Queen Victoria had a slice of boiled chicken or a cut from the sirloin or a slice of game along with white soup for luncheon. As for breakfast, egg on toast and a small selection of fancy bread were it. But she had a strong weakness for afternoon tea, says Anonymous. In the “self-medicating” Victorian age, tea was considered non-intoxicating in a temperance-fixated Victorian England, and could have led to more of her subjects adopting the habit. Among Queen Victoria’s favourites at teatime were chocolate sponges, plain sponges, wafers, langues de chats, biscuits and drop cakes of all kinds, pralines, almond sweets and a large quantity of mixed sweets. Among fruits, she had a fond­ness for amber grapes, pineapples and peaches, often sent by the Rothschild family. And among vegetables, she adored potatoes.

The fondness for eggs continued with her great-great-granddaughter’s family; Prince Charles is a fan of boiled eggs and Prince Philip preferred omelettes. Both queens loved chocolate. “The Queen [Elizabeth] requests chocolate sponge cake each year for her birthday,” her chef Darren McGrady writes in Eating Royally. The cake is dark bittersweet chocolate genoise cut into three layers, each one filled with a rich chocolate ganache, one made with the cream from the Windsor diaries. More hot ganache is poured over the top, enough to soak the sides. He says the Queen loved having it with her tea, and any leftovers were packed into “Ascot boxes” and sent with the other provisions to Windsor Castle where the Queen spent every weekend.

Teatime was Queen Elizabeth’s favourite among all the meals, McGrady writes. But unlike the excessive number of sweets served during Queen Victoria’s tea, this queen favoured a smaller number of dishes—two types of sandwiches with dif­ferent fillings (smoked salmon being her favourite). The bread (either whole wheat or white) was sliced thinly and cut into squares, and the corners trimmed to create an octagon. Why? Because it looked too much like a coffin otherwise and meant the chef wished the Queen ill, says McGrady.

Like any of us, a queen’s food habits are made in their childhood. Queen Victoria came from a long line of excessive eaters who lived opulent lifestyles. Charles Oliver, who served on the personal staff of King George V and Queen Mary, and later King George VI (Queen Elizabeth’s father), collected his reminiscences, which were published after his death. In Dinner at Buckingham Palace—Secrets & Recipes, Oliver writes that royal eating habits during the reigns of Queen Victoria and later King Edward VII followed the lavish approach of their Tudor and Elizabethan predecessors. A typical lunch for six might include cold pheasant, a couple of partridges, two hot roast fowls, and hot beefsteaks, and an assortment of pastries and enormous Stilton and Cheshire cheeses, accompanied by wines.

“At least five different courses were served for the royal breakfast. Bacon and eggs, bloaters [herring], chickens, chops, cutlets, sausages, steaks and woodcock were on offer…Despite such huge breakfasts, the royal household was apparently hungry again by lunchtime when meals of eight or ten courses were the order of the day.”

The royal supper, he says, was the most elaborate meal of the day. Thick and clear soups, fish cooked plainly or prepared with elaborate sauces and flamboyant dressing. “There would be two entrees, two varieties of roast meat, chicken or quail, game, sweetbreads, two desserts, two savouries and at least two kinds of water ices to prepare overburdened royal stomachs for the next course.” And just in case anyone felt hungry after these meals, there were always side tables set out with cold chickens, tongues, rounds of beef, partridges and pheasants in season, and salads.


With the death of Queen Elizabeth, an era has ended, an era where food habits were shaped by the privations of war and rationing, leaving them with a yearning for gentleness as witnessed in the Queen’s preference for dining by candlelight, her sweet tooth (sugar was rationed during the war) and her fondness for simple dishes

By contrast, Queen Elizabeth’s food habits were born in the wartime years—an era of rationing and abstinence. While growing up in Windsor Palace, Queen Elizabeth was not accustomed to eating the decadent meals of her predecessors who’d lived in a gilded age. Her grandfather, during World War I, prohibited wine in the royal household. The shocked royal chef asked what he should serve instead. Queen Mary wrote back: “Sugar water. Serve water, boiled with a little sugar.” Queen Elizabeth used to rise after 8AM and have breakfast with her husband in the Green Tea Room at 9AM, a traditional one of fried eggs and bacon and sausages, which in her later years gave way to cereal, toast and marmalade served with tea (Darjeeling, Earl Grey or Assam), and fresh chilled orange juice. Bagpipes were played below her window.

When Princess Elizabeth married Prince Philip in Novem­ber 1947, her wedding breakfast consisted only of four courses. Though perhaps in a nod to her sweet tooth, there were eleven wedding cakes. Charles Oliver writes that the main cake, four tiers and about nine feet tall, weighed 500 pounds and contained three gallons of Navy Rum, 80 oranges and 660 eggs. It became known as the 10,000-mile cake as ingredients had to be shipped from all over the world.

A monarch’s taste is also influenced by their belongings. Queen Victoria was the Empress of India, and as such, took pride in holding the title and surrounding herself with vividly attired Indian footmen and waiters, says Anonymous. Hence perhaps, her fondness for curry (prepared by her contingent of resplendently attired Indian servants), which today, reigns as the national dish of Great Britain. Queen Elizabeth’s ascen­sion to the throne in 1952 came after the British were forced to leave India. McGrady writes that she did not enjoy spicy dishes, preferring plain British fare instead. She had Sole Murat (Dover sole fillet) once a week with sautéed artichoke hearts and crispy fried potatoes. His cookbook of the present royal household’s favourite recipes reads like a menu from a club like Gymkhana or the Bengal Club: Salmon en croute, Pommes Fondantes (roasted potatoes simmered in broth), roast leg of lamb, Beef Wellington, Creme Brulee, brandy snaps (the closest the queen came to eating ice-cream out of a cone), cheese souffle (another favourite of the queen—she’d drive a spoon straight down the middle and pour fresh cream right in), St Germain haddock (the royal way of eating fish and chips, but they never ate out of a newspaper). Other favourites included cottage pie made with fresh ground beef in rich brown sauce (Princes William and Harry demanded it at least once a week), Steak Diane (Prince Philip loved to cook it for family barbecues), bread and butter pudding (Princess Diana’s favourite), lychees and peach melba (Prince Charles’s favourite).

From these memoir-cookbooks it is clear that the French­ified names of the dishes continues in the royal menus today. The irony is that British national cuisine—English rural gentry dishes—emerged in the 18th century as a reaction to the French influenced menus favoured by the Whig party leaders. But evidently, the royal practice continued of favouring French inspired menus and recipes, and cooked by French chefs who, after the French Revolution were left without noble houses to employ them, thronged the capital, and entered the service of the British aristocracy and Buckingham Palace.

With the death of Queen Elizabeth, an era has ended, an era where food habits were shaped by the privations of war and rationing, leaving them with a yearning for gentleness as witnessed in the Queen’s preference for dining by candlelight, her sweet tooth (sugar was rationed during the war) and her fondness for simple dishes.

In English Royal Cookbook: Favourite Court Recipes published in 1953, Elizabeth Craig highlights the recipes that were collected in an old scrapbook (hand-bound in vellum, with a crown stamped on every page) by Princess Charlotte, daughter of George IV and Caroline of Brunswick, and bequeathed to Queen Victoria when she was a young girl. The entries in the book dated from 1831 to 1887, and other princesses later added to this collection. One wonders if Queen Elizabeth continued with the practice, and if so, would we see its publication in her memory.