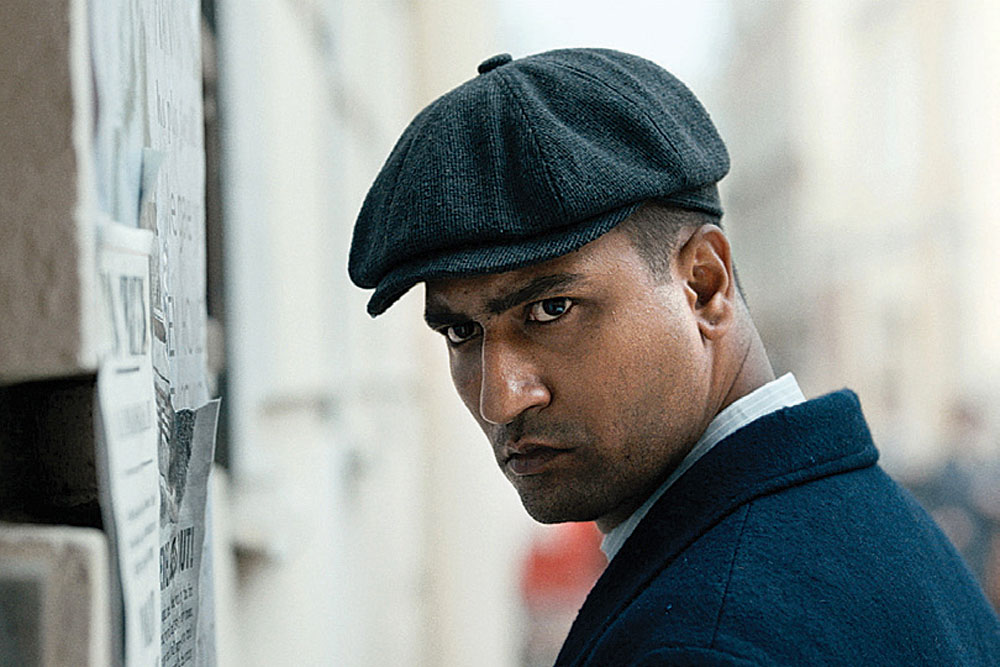 
The English robbed us for decades, now it’s our turn,” says Firangi, played by Aamir Khan, in the unla­mented Thugs of Hindostan, as he turns his stolen ship towards Inglistan also known as England. Anti-colonialists would have been proud of the 2018 film if they had seen it.

But the British were not amused when they were shown as kidnappers and tormentors in SS Rajamouli’s RRR (2022), with a particular vile governor and his even more demonic wife cheering every time poor Komaram Bheem is flogged by his eventual saviour Alluri Sitarama Raju. When the wife, played by former Bond girl Alison Doody, is not satisfied by the blood spilled, she gives Raju her own whip, suitably embellished with nails. Robert Tombs, emeritus professor in his­tory at the University of Cambridge, how­ever, told Daily Mail: “This film is a piece of xenophobic slander, utterly false and without historical foundation.” He also wrote a critical review in The Spectator; “To portray British officials and soldiers roaming the country casually commit­ting crimes is a sign of absolute ignorance or of deliberate dishonesty.”

The monarchs have usually been spared such a depiction and are popular subjects with their former subjects in Bollywood, most often in the Housefull franchise, beginning with the first in 2010 where lookalikes of the Queen, the Queen Consort Camilla and King Charles III are laughing uncontrollably thanks to the accidental injection of laughing gas into Buckingham Palace during a ceremony to honour soldiers from across the world who have saved the world from terror (among them our very own Arjun Rampal). After initially being startled by the commotion around her the faux Queen then sits down with actor Riteish Deshmukh and chants Jai Maharashtra.

Perhaps reducing the Queen to a figure of fun has also precluded us from a deep examination of 200 years of colonial rule except in a handful of films such as Satya­jit Ray’s Shatranj ke Khilari (1977), Shyam Benegal’s Junoon (1979), Priyadarshan’s Kaalapani (1996, one of the earliest films to extol Veer Savarkar before it became politically fashionable), Ketan Mehta’s Mangal Pandey: The Rising (2005), Kangana Ranaut’s Manikarnika: The Queen of Jhansi (2019), and biopics such as Ketan Mehta’s Sardar in 1994, and Jabbar Patel’s Dr Babasaheb Ambedkar: The Untold Truth in 2002, starring Mammootty.


Most films that have examined colonial rule have done so by focusing on its end, the Partition, none more heroically than in Deepa Mehta’s Earth (1999), Kamal Haasan’s Hey Ram (2000) and Ashutosh Gowariker’s Lagaan (2001). The first two examined how the end of colonial rule affected the lives of ordinary people whereas the latter cre­ated a fictional world where the British could be defeated at their game.

But the Queen specifically has been the subject of a heist, no less than that of her crown, in Dhoom 2 (2006), where she is played by a very pretty Hrithik Roshan who steals the crown after first playing with a boy supposed to be little Prince Harry. Most recently there was another train robbery of the crown in Shamshera, undoubtedly echoing some deep popular emotion about the return of the Kohi­noor, the diamond that found its way from the young Duleep Singh, the last Maharaja of Punjab, to Queen Victoria, his self-declared friend and protector. The Ko­hinoor, worn in the crown of the Queen Mother (Queen Elizabeth II’s mother), has been the subject of tension between Britain and India. India has demanded its return ever since India gained indepen­dence in 1947 even as the British have insisted it was obtained legally under the Last Treaty of Lahore. Kavi Raz’s The Black Prince (2017) portrayed this well, with Shabana Azmi playing Rani Jind, who went to prison before being freed and be­ing allowed to meet her son who had been shipped off to England. It is one of the most tragic encounters between colonial Britain and colonised India and yet not enough has been written or made on it.

By and large, the cinematic view of the relationship between India and her former ruler has been portrayed as largely benign even if that sentiment has not extended itself to the rule itself. In popular culture, Her Majesty’s gov­ernment has been seen as cruel, not so much the monarchs. Remember Kranti (1981), Manoj Kumar’s revolutionary epic, largely set aboard a ship, whose captain is played by the late Tom Alter in full nostril-flaring, lip-curling, and belt-swishing mode. When he an­nounces his intention to force his way upon Hema Malini, playing Rajkumari Meenakshi, an Englishwoman carry­ing a wooden cross, tells him: “Don’t do it, for Christ’s sake. Don’t do it. The Queen of England will not forgive you.”

As historian Maya Jasanoff wrote in the New York Times upon the death of the Queen, to an outpouring of criticism from royalists, “the queen helped ob­scure a bloody history of decolonization whose proportions and legacies have yet to be adequately acknowledged.”

It’s a complicated relationship which was most obvious in India, where a renaming of Delhi’s colonial past coincided with the nation declaring a day’s mourning for a former monarch, one, however, who didn’t rule it directly. Rarely is a monarch blamed specifically for Britain’s colonial excesses. There are exceptions however, even in Bollywood. In Shamshera, which was released earlier this year, British officers are seen in a far more sympathetic light than their Indian counterparts. Talking about the dacoit Shamshera’s plan to steal enough gold to free his Khameran tribespeople, a British officer says: “It hinges on the greed and corruption of the British empire,” even as the scene shifts to a portrait of Queen Victoria. It is clear that she symbolises those aspects.

In Gurinder Chadha’s Partition, 1947, this is emphasised further when two manservants in the Viceroy’s House (now Rashtrapati Bhavan) address a bust of Queen Victoria and say she didn’t even bother to set foot in the empire. “Now Mountbatten can take his great grandmother home,” says one of them, tongue in cheek. England, it is clear, is no longer the power that it was: all slums and bombsites, scoffs one valet. Edwina, Mountbatten’s wife, cor­roborates this by exclaiming how the Viceroy’s House makes Buckingham Palace look like a bungalow, before she and her screen daughter eat the chicken slices meant for their dog, in a scene first written in Dominique Lapierre and Larry Collins’ Freedom at Midnight.

It was always something Queen Elizabeth would hark back to, the priva­tions England endured during World War II to defend freedom across the world and the resilience of the wartime generation which had so little.

Bollywood has devolved engage­ment with the Raj to the British, keep­ing itself away from an understanding of its colonial past. It has allowed narratives from the English to flour­ish. This has meant that even seminal events such as the Jallianwala Bagh massacre was only recently docu­mented in excruciating detail in Shoojit Sircar’s Sardar Udham (2021). In Richard Attenborough’s Gandhi (1982), there is only the suggestion of violence and mass execution, never the full horror of what General Reginald Dyer did. But in reality or cinematically, India did not get an apology from the Queen for what happened on her grandfather’s watch.

Sardar Udham is also one of the few films which show the dark heart of imperial rule without the melodra­matic edge of movies such as The Legend of Bhagat Singh (2002). King George VI asks Winston Churchill whether the Crown will quit India after the war. Churchill’s reply is a masterclass in obfuscation. “Let’s just say the British will need to reinvent a way of main­taining their strategic presence in the subcontinent,” he says. King George VI’s concern is primarily that the British government must not appear weak, and that the rebellion should not spread to the Indian soldiers fighting World War II. It is important to have such slices of history become part of the popular conversation, not to encourage hatred, but to promote analysis and understand where we are. It is necessary to counter the vague references to British rule being exploitative as in the outrageous Mard (1985) where Amitabh Bachchan, playing Dara Singh’s son, declares: “Sab goron ka dil kala nahin hota (Not all white people have black hearts).”

Most films that have examined colonial rule have done so by focusing on its end, the partition, none more heroically than in Deepa Mehta’s Earth

The long form of web series is also enabling a certain budget and expanse with the subject. Emmay Entertain­ment’s forthcoming Freedom at Midnight for SonyLIV, will be one of the few series that examines the transfer of power through the eyes of the great men and women who were part of the process. Applause Entertainment is also mak­ing a series on Mahatma Gandhi based on historian Ramachandra Guha’s books, Gandhi before India and Gandhi: The Years That Changed the World, with Pratik Gandhi playing the Mahatma.

Perhaps it will usher in a new era of re-examining the imperial rule and the monarchs who ruled us, however distant they were. The British have done much better at it, whether it was chronicling Queen Victoria’s relation­ship with her servant Abdul Karim, based on Shrabani Basu’s Victoria and Abdul (2017), or captured the days of the British Raj in the beloved mini-series The Jewel in the Crown (1984).

Too much sunlight is indeed detri­mental in some cases. In 1997, when Queen Elizabeth II spent a good 20 minutes on the sets of Kamal Haasan’s magnum opus Marudhanayagam, based on 18th-century folk hero Mohammed Yusuf Khan, the movie was never com­pleted. Distance, sometimes, does make the heart grow fonder.