Will the coronavirus change what we eat and how we eat? 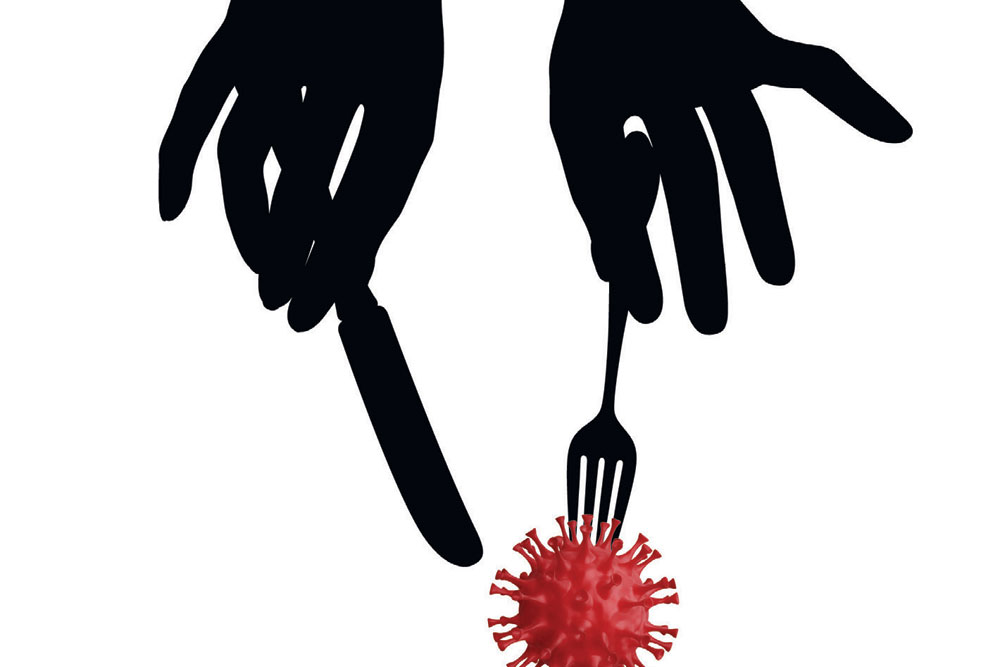 
ACCORDING TO my mother, there are three things that are of interest to everyone: food, sports and health. With the COVID-19 pandemic on us, food and health have never been more viscerally linked than now. We are all being asked to self-quarantine and stop our social activities; meeting friends in pubs and restaurants and clubs are on the ‘avoid’ list. In Britain, those above 70 are being asked to stay at home for the next four months. My English friend who has elderly parents, both of whom have had several stints at the hospital for serious ailments, has spent much of this week ensuring that they have everything they need.

How did people survive (or not) the Black Death in the 16th century? In the TV series Dining with Death, a scholar points out: “Since emotions also affected health, physicians advised that melancholy should be avoided. Plague regimens advised people to: ‘Keep good company, drink good wine, and eat good meat.’” Others spoke of avoiding melancholy. Eating together also provided the psychological reassurance found in social ritual. Such reassuring rituals were visible all over Europe.

Fast-forward to present-day Italy: Scenes of serenades and concerts from the balconies of quarantined Italians have been streaming on the internet. Social distancing, they have rightly realised, does not mean human distancing. In fact, it is the reverse: the more time one spends at home, the more social one can be in engaging with neighbours and friends through chats between balconies, and via Zoom and Skype, and in block or street parties where everyone eats and drinks in their own homes but in full view of the others. This week an apartment complex in Gurugram had a balcony-block party.

Social distancing need not produce melancholy and depression, especially in those who live alone. We are luckier than those in the earlier centuries who did not have access to virtual communications. It is possible to eat with others virtually—pour out a glass of wine or beer or juice, put your laptop on the dining table (after sanitising it, of course) and log into Zoom or Skype or something else, and converse with your friends or loved ones. It will stave off loneliness and depression; a healthy mind is, after all, very important in fighting off any ailment. My mother, for instance, has tea in New Delhi while listening to her granddaughter play the piano in Dallas via Skype. She has lived in the same apartment complex for 30 years, but has connected with her neighbours only now, during her morning walks.

Laura Spinney, the author of Pale Rider: The Spanish Flu of 1918 and How It Changed the World, says that whenever contagion is a threat humans have practised ‘social distancing’—understanding instinctively that steering clear of infected individuals increases the chance of staying healthy. In 1918, the spread of the Spanish Flu resulted in social distancing that took the form of quarantine zones, isolation wards and prohibitions on mass gatherings—where they were properly enforced, these measures slowed the spread. As many as 18 million Indians died in the pandemic—the greatest loss in absolute numbers of any country in the world. British colonialists did not bother to enforce these measures, fuelling resentment among Indian nationalists and increasing the calls for independence.


Historically, the origins of food taboos appear to be linked to infectious diseases. These include prohibitions on drinking raw animal blood, on sharing cooking and eating utensils and plates between meat and other food

With the booming transport system—planes, trains, buses, cars—contagion is much faster for us now than it was during the Spanish flu in 1918 or the earlier pandemics.

Here are some facts we do know about SARS -CoV:

1) The virus stayed stable at 4°C and at room temperature (20 °C) for at least two hours on a range of surfaces and in water.

3) Any food not cooked to a significant degree are more at risk; this is even the case for food processed with a ‘Listeria-cook’ of 72°C for two minutes. Also, chilling and most likely freezing is not readily going to destroy this virus and therefore chilled and frozen food sourced from major outbreak zones should be risk-assessed.

4) Ethanol is very effective in killing the virus (so washing hands with ethanol-infused soaps is very important before touching food—and in general too).

This means that logically one should eat food cooked well (either slow-cooked or at high temperatures)—so salads may not be ideal. We can only kill the virus in food by thoroughly heating it during cooking.

Historically, the origins of food taboos appear to be linked to infectious diseases. These include prohibitions on drinking raw animal blood, on sharing cooking and eating utensils and plates between meat and other food, and on eating pork in Judaism and Islam (most likely concerned about dangerous pig tapeworms). Even today, the consumption of raw milk is illegal in many countries, to prevent spread of bovine (cow) tuberculosis.

While it is not clear what taboos COVID-19 going to create (will the custom of Middle Easterners eating from the same plate die out?), the reliance on traditional remedies seems to have gained more adherents worldwide. A rumour in India that the virus is linked to the poultry industry has led to the collapse in the price of chicken and an increase in the prices of potatoes and vegetables. The sales of raw turmeric have shot up, with an over 300 per cent increase in demand for turmeric from the UK and Germany, but the cancellation of flights means that merchants have not been able to take advantage of the demand. Ayurveda says having raw turmeric in hot milk keeps the respiratory system clear.

During the plague in the 17th century in England, a band of thieves routinely broke into the houses of plague victims and looted the corpses without ever falling ill with the disease themselves. It transpired that they were a family of perfumers who coated their bodies with oil containing lavender essential oil which they knew protected them from the deadly bacteria. They seemed to have used a combination of lavender, rosemary, camphor, nutmeg, sage and cinnamon in a suspension of vinegar and garlic.
If nothing else, COVID-19 may bring back the habit of washing one’s hands even if one is eating with a spoon.

What about ordering in food? Is it safe to consume it? There is no evidence as yet that the virus can be transmitted through food but there is growing evidence that you can ingest the virus shed in faeces through poor handwashing. So do be certain of the restaurant’s food-handling standards before ordering in. Domino’s Pizza has introduced ‘zero contact delivery’ across its all 1,325 restaurants applicable on prepaid deliveries. This means that the delivery person will place the carry bag in front of the customer’s door and step back a safe distance after ringing the bell. Oh, and do double the tip—think of how much danger the delivery person faces in going from house to house.

The bubonic plague (1348-1350), also known as the Black Death, temporarily reversed the power imbalance by making elites suffer while peasants and serfs benefited from the increased demand for labour. Wages rose, a fact that was recorded quite resentfully by the monks of Rochester in 1348. ‘An inversion of the natural order, [and] those who were accustomed to have plenty and those accustomed to suffer want, fell into need on the one hand and into abundance on the other.’ The diet of the lower orders improved substantially. Before 1348, the diet of an English peasant was bread and oatmeal pottage, a few scraps of meat washed down with some thin ale. After the Black Death, they ate beef and mutton instead of bacon, wheat bread instead of barley and fresh fish instead of salted herring. Here is a grumble from an English landowner: ‘… Because such a man is hired as a member of your household, he scorns all ordinary food… he grumbles… and he will not return tomorrow unless you provide something better.’

This, alas, is not going to be true for the poor today after COVID-19. The economic hardship that awaits us this year will impact those lower down in the economic strata more disproportionately than the wealthy. If anything, their diets may worsen as businesses downsize and cut jobs. There is a crying need for governments (especially ours) to immediately come to the aid of the indigent and the needy, especially those working in the informal sector.