The Akbari Synthesis and India’s Plurality

What Sikandra tells us 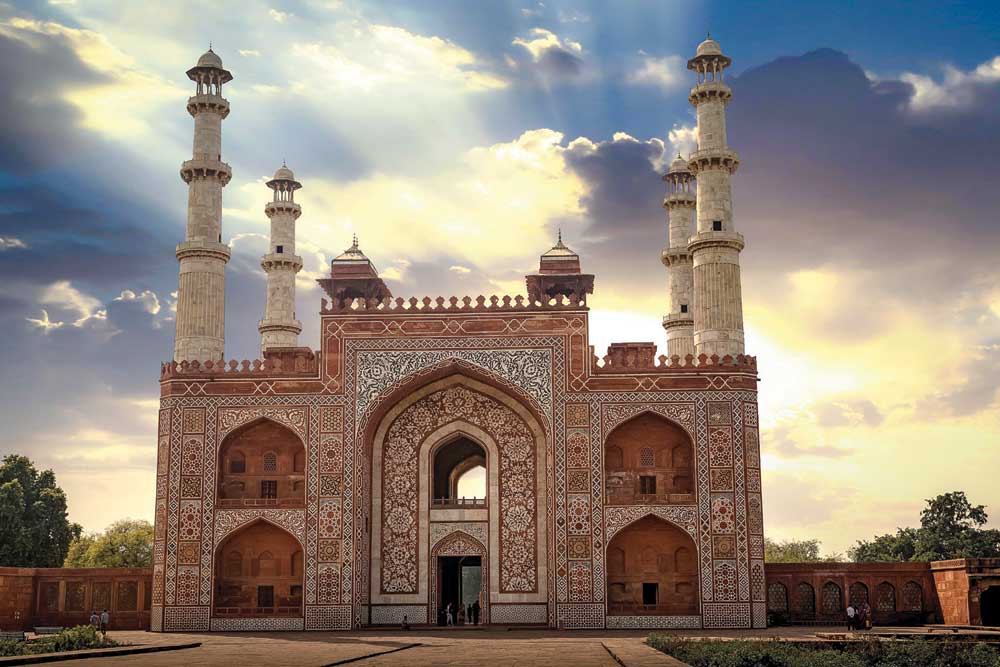 THE PARAKEETS transit between heaven and earth like the souls of departed Sufis, their music of trill, squawk and wooroo echoing in the vaulted arches. Morning’s hazy lucidity brushes the tomb, the light snagging in the mottled red sandstone and sparking along marble intarsia. Antelopes rest in its grounds. Their graceful ease belongs not to a present coarsened by demagogues, but to a paradise garden nourished by the murmur of fountains and prayers.

Sikandra is a quiet place. The tomb has withstood weather and desecration, and the Archaeological Survey of India has reclaimed its grandeur from the relentless sand. I have, ever since I first visited the Agra region as a 13-year-old, preferred its tranquillity to the overwhelming resplendence of the Taj Mahal. If a sense of being powerfully centred takes possession of us in Sikandra, it is not only because the mausoleum is an image of the cosmos. This is the birthplace of modern India. The man who rests here, Akbar, authored the first cogent vision of a plural and inclusive society in the Subcontinent.

Without knowing of his illustrious predecessor Ashoka— who had been lost to public memory until the scholar James Prinsep rediscovered him in the 1830s—Akbar improved on the Mauryan emperor’s example. Ashoka had raised the canopy of the all-pervasive Dhamma above his vast dominions, subordinating all differences to it. By contrast, Akbar was hospitable to differences, even to eccentricities and idiosyncrasies, and offered them his protection. He had a bewilderment of Chughtais, Balkhis, Rajputs, Brahmins, Iranis, Turanis, Zoroastrians, Kayasthas, Jains, Jesuits, and numerous other groups to work with. That he knit these soloists into a memorable and reasonably enduring concert, anticipating the Republic by four centuries, was a formidable achievement.

The emperor had had to contend with multiple challenges. Confronting him was a hierarchically ordered caste society that largely froze social mobility, emphasised minute distinctions of status and entitlement, and enforced rigid and even brutal protocols of membership and exclusion. Yet here, too, was a society that revelled in a diversity of belief systems, religious practices and styles of life, many of them quite incompatible with one another, and enjoying a disputatious yet largely peaceable adjacency. Facing him on another front was a religion that promised equality to all its proponents, irrespective of differences of class and ethnicity. But, convinced as it was of its monopoly on truth, it could not countenance the claims of other religious and philosophical systems, especially those that were not premised on the revelation of a single Deity.

Replying to his son Murad’s questions in 1591 CE—the prince had just been appointed governor of Malwa and sought guidance on managing his new constituents—Akbar wrote: ‘The multitude should practice Sulh-i kul, mutual and peaceful understanding, with the world and with all humankind. … Everyone who comes to the path of reason is fortunate. And everyone who remains miserable in the barren land of tradition is an invalid. Every person who recognises and worships God in whatever way is welcome.’

In this spirit of ecumenical openness, Akbar launched the grand translation projects from Sanskrit that form one of the Mughal dynasty’s many lasting contributions to world culture. The Panchatantra, which had entered Arabic as early as the eighth century as the Dastan Kalilah wa Dimnah, was rendered into Persian at Akbar’s behest by Abu’l Fazl, as Ayar-i Danish.

The emperor wished his Muslim subjects to become acquainted with the Mahabharata, which was rendered into Persian as the Razmnama. Playfully, or perhaps in the hope of bringing about a change of heart, Akbar commanded the scholar Abdul Qadir Badauni, known for his antipathy towards Hindu and Shi’a beliefs, to work on this project. These were team translations. Sanskrit scholars translated the original texts into Hindi or Persian cribs, which were crafted into literary Persian by their Persophone counterparts. Meanwhile, Akbar’s son, Salim—the future Emperor Jehangir—commissioned the scholar Nizam Panipati to produce an abridged Persian version of the Yoga Vasishta.

Akbar and his circle also patronised Awadhi and Brajbhasha poets. Tulsidas, spiritual questor and author of the acclaimed Ramcharitmanas, had close links to the Mughal court. Revered by Raja Man Singh, Akbar’s general, he was a personal friend of Akbar’s celebrated minister and Braj poet, Abdur Rahim Khan-i- Khanan (known to his audience as Rahim Das). Of the Ramacharitmanas , Abdur Rahim/Rahim Das wrote: ‘Ramacharitmanasa bimala santana jivana prana/ Hinduvaana ko beda sama javanahi pragata kuraana.’ (The Ramacharitmanas, in its purity, is the life- breath of the saints./It is what the Vedas are to the Hindus, and to Muslims the revealed Qur’an.)

Consonant with this lifelong dedication to synthesis was Akbar’s decision in 1605 CE—the fiftieth year of his reign and the last year of his life—to issue the now rare ‘Ram-Siya’ coins in gold and silver. Each bore, on the obverse, an image of Rama and Sita with the Nagari legend, ‘Ram-Siya’; and, on the reverse, the month and year of Akbar’s regnal or Ilahi calendar, which was adapted from the Persian Zoroastrian calendar, ‘Amardad Ilahi 50’.

My parents first brought me to the Mughal heartland as a boy who hoped someday to be an architect. I became a poet and a curator instead, but Agra’s lessons have never left me. Looking along sight-lines, both clear and interrupted, guessing at landscapes through filigree screens, ambushed by vistas hiding around corners, I learned how an amplitude of meanings can be generated by configuring forms, not as standalone objects, but as nodes in a net of dynamic relationships. Just as important was the lesson of detail. To revel in the marriage of aiwan and chhatri, kalash and minar, is to gain immunity against those who present our history as a tale of endemic mistrust and violence between rival religions, a narrative about the erasure of the past and the imposition of alien ideas.

Those who denounce Mughal architecture as a foreign import, transplanted from West Asia, know nothing of Mughal or West Asian architecture. Evidently they know nothing, either, of the Hindu and Jain styles associated with Gujarat, which—by way of the Gujarat Sultanate— permeated the exceptional buildings, sacred and secular, commissioned by Akbar and his successors.

The ‘Akbari synthesis’, as Ebba Koch, the leading historian of Mughal architecture, describes it, manifested itself in a vibrant coming together of elements from Iran, Timurid West Asia and Transoxiana (including today’s Uzbekistan, Tajikistan and parts of Kyrgyzstan and Kazakhstan), from Malwa, Rajasthan, and Gujarat. From western India came the jharokas or enclosed overhanging balconies, and the jaalis or latticework screens. From the temples came the circumambulatory verandah around a central sanctum—the parikrama and the garbhagriha—that would go into tombs like Sheikh Salim Chishti’s dargah in Fatehpur Sikri. From Iran came the chaarbagh plan, the Garden of Paradise envisaged as a fourfold space alive with flowering shrubs and running water. From Timurid West Asia came the plan of eight chambers surrounding a central space. Called hasht-behesht or ‘eight heavens’, it mapped beautifully onto the Indian nava-grahamandala model of the nine planetary houses.

The Akbari synthesis rippled out in many directions. Akbar’s general, the Kachhwaha Rajput Raja Man Singh, commissioned the Govind Deva temple in Vrindavan in 1590. For this plan, Man Singh inventively translated, on a giant scale and in sandstone, a traditional Khorasani design for a multipartite vaulted roof based on four intersecting arches, more typically used in private apartments and tombs. Across water palaces, pleasure houses, hamaams, tombs, temples, caravanserais, pavilions and gateways, Mughal architects evolved an eclectic repertoire—stucco domes, ribbed domes, lotus domes, arcaded facades, pillared courtyard halls—and articulated its technical and symbolic possibilities with grace and confidence. Mughal architecture is an indispensable reminder of the experiments in confluence that have shaped all that is most excellent in Indian culture through the millennia.

Ranjit Hoskote
Ranjit Hoskote is a curator and author. His most recentbook of poems is The Atlas of Lost Beliefs