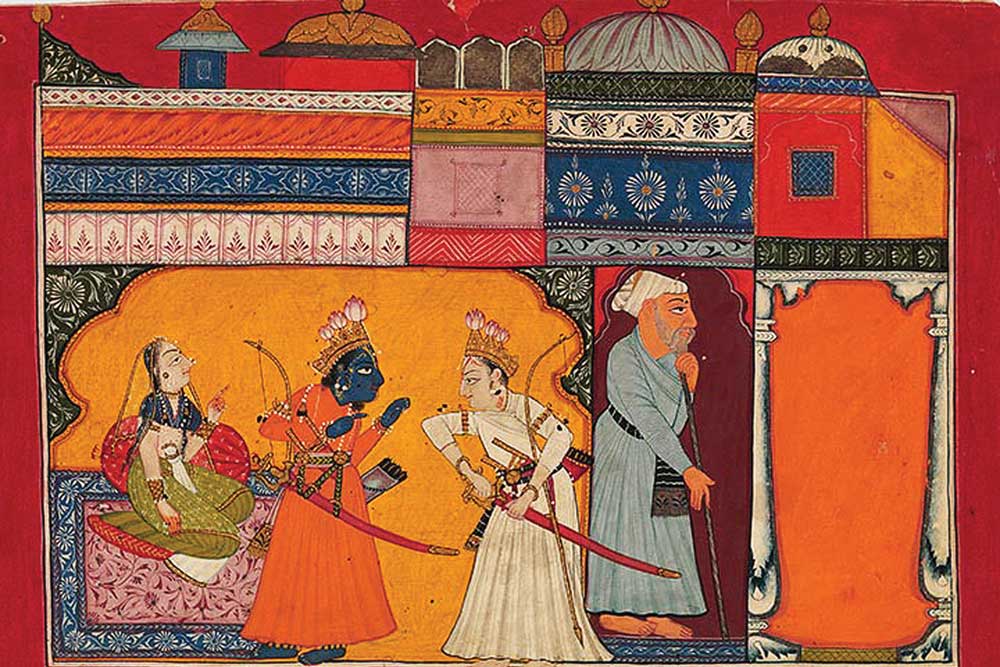 
AS A CHILD in the 1970s, my image of Ram was that of a warrior conflicted about his role, torn between love and duty, his vulnerability evident in his struggle to serve an elusive dharma that shifted from one situation in his life to the next. Oblivious of his divinity, not immune to error, this Ram was rebuked and instructed in good conduct by the dying Vali, the monkey king whose treacherous killing remains a stain on his reputation. And yet this Ram also embodied, in the words of the 16th century saint-poet Surdas, the peerless ideal of ‘nirbal ke bal Ram’, ‘the power of the powerless’. By the late 1980s, as I stepped into my twenties, this beloved figure had been replaced by another and aggressively re-imagined personage, a muscular, militaristic Ram spearheading a campaign of cultural and political revanchism. As the decades pass and this parochial image of Ayodhya’s god- king becomes dominant, it has become easy to forget that Ram is perhaps the most widely travelled of India’s gods.

The seventh avatar of Vishnu, the Preserver in the Pauranic Hindu trinity, Ram is ubiquitous across South Asia. He appears in diverse sthala-puranas, the local narratives on which the Subcontinent’s sacred geography is premised, and which vary from region to region, caste group to caste group. In these narratives, whether performance script, epic recitation or folktale, the Sanskrit texts of high culture have been translated, re-interpreted and even subversively morphed by actors, singers, dancers and acrobats working in the demotic regional languages. The emphasis in these versions—which would invite the wrath of the morality police—varies, sometimes radically, depending upon the teller’s ethnicity or class position. In some folk performances of the Ramayana, subaltern or relatively minor figures—demons, boatmen, monkey-soldiers—assume far greater importance than they enjoy in the classical Sanskrit text.

In a poignant and politically astute north Karnataka folk performance, documented by the poet-anthropologist AK Ramanujan, Ram encounters a group of transgender people who have waited 14 years for his return on the banks of the Sarayu—because he asked his ‘brothers and sisters’ to go back to Ayodhya and not follow him into exile, unwittingly leaving his transgender subjects in limbo. The Lakshman of a tale retold by the chitrakathi pictorial storytellers of the north Konkan is hoodwinked by the local woodworkers when he is ordered by his brother Ram to cut off Sita’s arms. The woodworkers, entering the frame of the epic and assuming agency within it, replace Sita’s arms in the nick of time with a pair of wooden replicas.

In Valmiki’s Sanskrit Ramayana, Ram is trapped between personal life and public duty, going into exile to honour his father’s rash promise to his stepmother. He is the tenderly sentimental exile of Kamban’s Tamil Ramayana, grieving for his abducted wife Sita and asking the birds and creepers for news of her. He is the ageing king of Bhavabhuti’s Uttararamayana, the ‘Later Ramayana’, punishing his wife for an imagined error, so as to be seen as an impartial judge, and losing her for ever. Tulsidas’ Awadhi Ram-charit-manas regards him as the measure of ethical conduct. But Ram travelled further than the Gangetic plains and the Tamil country. He sailed for Southeast Asia with Indian merchants, scholars and warriors who voyaged out in many waves from the eastern seaboard’s flourishing harbour-cities— Tamralipti, Mamallapuram, Tarangamati and Poompuhar— between the 2nd and 15th centuries CE.


Ram is ubiquitous across South Asia. He appears in diverse sthatla-puranas, the local narratives on which the subcontinent’s sacred geography is premised, and which vary from region to region, caste group to caste group

As these travellers established trading networks, founded empires and crafted religious systems in their countries of domicile, they merged into local populations. Over time, their stories became woven into Southeast Asia’s distinctively transcultural Malay, Chinese and Arabic ethos, transmuted through re-telling and re-enactment. In Malaysia and Indonesia, today dominantly Islamic societies, the Ramayana is celebrated as a part of the national heritage. Malaysia, whose fusion of Malay, Chinese and Indian elements was formatted within an Islamic framework between the 13th and 15th centuries, has 25 extant Malay Ramayanas. Generically titled the Hekayat Seri Rama, these are preserved in the Arabic script and performed in the wayang tradition of shadow- puppetry, whose directors and singer-actors are Muslims. Through the process of syncretic transfusion that informs encounters among dissimilar traditions, Islamic and Hindu legacies come together in these Malay Ramayanas. Their Ram is presented as a descendant of the pre-Islamic prophet Adham (the Biblical Adam). This Malay Ram is a lesson in how heterogenous, potentially divisive inheritances can be crafted into pluralistic cultures.

In Indonesia, the Muslim masters of Java’s robust yet exquisite wayang kulit shadow puppet theatre improvise around the Ramayana-kakawin, as the epic is called in Old Javanese. Attributed to the sage-poet Yogisvara but clearly composed by an ensemble of authors, the Ramayana-kakawin is structured into 26 cantos making a total of 2,771 verses. Painting their figures like calligraphic strokes on veils of light, the wayang masters blend the evocation of the epic with critiques of social and political life, merging the classical with the popular and contemporary. Meanwhile, in Burma, a fusion of Vaishnava and Buddhist religious ideas resulted in the reinvention of Ram as a royal Bodhisattva, memorialised in the 17th century Rama Watthu and, a century later, in the more ornate Maharama, as well as poetic treatments like U Toe’s 1784 Rama Yagan. Ram also appears as a Bodhisattva in Laos, whose Ramayana version is called the Lam Sadok, the Jataka of Ram.

It is in Thailand that Ram becomes a centrepiece of royal mythology and popular culture. Called the Ramakirti, ‘The Glory of Rama’, in high Sanskritic culture and popularly known as the Ramakien, the Thai Ramayana has underwritten dynastic symbolism for nearly 700 years. One of the most culturally rich phases of Thai history was the Ayyuthaya period when, between 1351 and 1767, the country was ruled from a newly built capital that took its name and style from Ram’s legendary capital. In the succeeding Ratnakosin period, the kings of the new Chakri dynasty adopted the practice of dropping their personal names and assuming ‘Rama’ as their throne name (the present ruler, Maha Vajiralongkorn, is formally known as Rama X). His ancestor, Rama I (1737-1809), composed a Buddhist verse adaptation of the Ramayana that still serves as the classical basis for the country’s traditions of theatre, dance and moral instruction. A shorter prose Ramakien composed by his successor, Rama II (1767- 1824), still forms the basis for dance performances and shadow- puppet plays.

The regal and popular identification with the epic was so complete that Thais believed it to be of indigenous Thai origin. They would have regarded it as absurd—if not blasphemous—to suggest that the Ramayana was a cultural import whose roots lay in another country. That news was broken to them only in the 20th century, when Rama VI (1880-1925), a Sanskrit and Pali scholar, wrote a Ramakien with a scholarly exegesis. How could the epic have unfolded anywhere but in Thailand, his baffled subjects must have asked themselves. After all, there, on the map, was Chayanat, where Hanuman looked for life-saving herbs to revive Ram and his brother Lakshman. And there, too, was Chonburi, where the monkey-king Valin fought the demon Thorapi. And how could anyone overlook the claims of Lopburi, the city founded by Ram’s son?

Lopburi is and is not Lavapuri. Valin is and is not Vali. Thorapi is and is not Dundhubi. In the domain of the plural narrative, every version possesses its own reality; there are no originals. The travelling Ramayana is a metaphor for Indian culture at its finest, a culture that evolves through synthesis, not as a tightly held monopoly but as an inclusive living heritage that gathers energy from a multiplicity of conversations, multiple sources of hope, compassion, love and empathy with the troubled human subject at the heart of all stories.