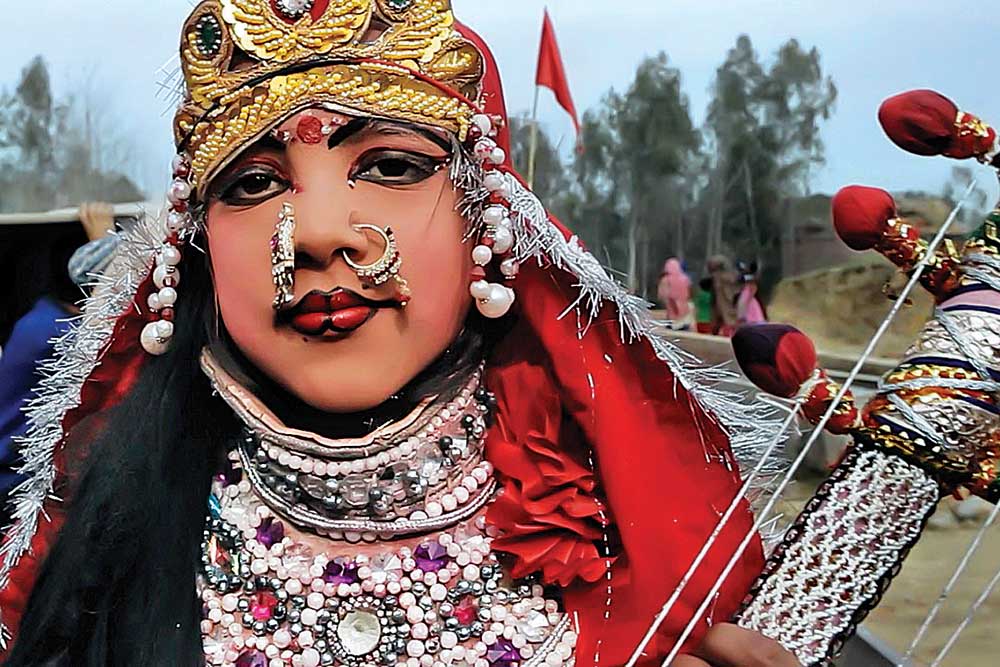 RIVERS HAVE ALWAYS fascinated me, with the rippling and purling of their waters, and the fractal venations that represent them on satellite maps. Perhaps this fascination springs from a biographical circumstance: I belong to an ethnic group that takes its name from a lost river, which once flowed in north-western India before the earth swallowed it up. Over the centuries, my people have migrated to parts of the Subcontinent and the world distant from their original home in Kashmir. Carried across time and space through their diaspora, the Saraswati has become a metaphor of loss and survival: a trope abandoned by geography but resurrected through language and music, the memory of a civilisation and the echo of a landscape. And while scientists and charlatans clash over the precise location of my ancestral river—as they do in Shirley Abraham and Amit Madheshiya’s sensitively made 2018 documentary, Searching for Saraswati—I find myself looking for its traces elsewhere.

I look for the river in the paintings of Kangra ateliers, in which every wavelet and leaf has been stylised by a painterly eye that regarded detail as the covenant of truth. I look for the river in the vachanas of Basava, who sings of his beloved Kudala- sangama-deva, Lord of the Meeting Rivers; and in the thumris of Siddheshwari Devi, their poignancy redolent of the ghats of Varanasi. I look for the river, again, in the films of Ritwik Ghatak, which record their protagonists’ journeys through the melancholy yet sublime topographies of Subarnarekha (1965) and Titash Ekti Nadir Naam (1973).

The river, today choked by dams and poisoned with industrial effluents, was once central to India’s material life and sacred culture. In common with other riparian civilisations of antiquity, the civilisations of the Indus, the Narmada and the Ganga valleys developed a water cosmology, a belief in the waters as the origin and sustaining principle of life. In this account, the river is a matrix of abundance. Its alluvial deposits and its water, fed by spring, thaw or rain, rendered the land fertile and made agriculture possible. Yet the cataclysmic threat posed by the flood-swollen river also produced the mythology of the pralaya, the world-annihilating deluge. The Indic religious imagination first embodied the Subcontinent’s temperamental rivers as apsaras or water goddesses. As early as in the Rig Veda, they appear as guardians of the river-treasury, vital but dangerous and unpredictable.

The nadi-devatas or river-goddesses of later times evolved from the Vedic apsaras. More benign than their precursors, theirs is an iconography of fertility. In the Kailasanatha temple complex at Ellora is a shrine dedicated to the three major river divinities, Ganga, Yamuna and Saraswati. Four images of nadi- devatas, each accompanied by a distinctive totemic vehicle, appear in the temple of the Chaunsath-yogini, the sixty-four yoginis, at Bhedaghat on the Narmada. Here, we see Ganga with her makara or horned crocodile, Yamuna with her tortoise, Saraswati with her peacock, and Narmada herself, on a makara pedestal. Each river-goddess carries the archetypal vessel of plenitude, the purna-kumbha. Later, in Sindh, that crucible of syncretic culture, there would emerge the figure of Jhulelal, Lord of the Waters. Seated on a great fish, Jhulelal fused within himself two prior figures: Varuna, Vedic God of the ocean and judge-king who preserved the moral order, and Khwaja Khizr, the Green One, the Guardian of the Fountain of Life in Islamic myth. Both these figures are ultimately traceable back to the mysterious Utnapishtim of the Epic of Gilgamesh, who ‘dwells where the river meets the sea’ and offers guidance to the eponymous hero of this Mesopotamian narrative.

If river routes were catalysts in the world of material gain and prosperity, they also supported an interpenetration of terrain, culture and belief systems, which we call a ‘sacred geography’

The river was a road in itself, and a guide to land routes. Northern India’s earliest historic cities were established, at the beginning of the first millennium BCE, along the Ganga-Yamuna system: Indraprastha (modern Delhi), Hastinapura and Kosambi on the Yamuna, Varanasi on the Ganga. By Mauryan times, a network of trade routes connected the north and east of the Subcontinent with the south and west. The main trunk road began at Tamralipti, the celebrated port situated near modern-day Kolkata, and passed through the ancient city of Champa, Pataliputra (modern Patna) and Varanasi to Kaushambi. From there, a branch led to Bhrigukaccha (today’s Bharuch) at the mouth of the Narmada, by way of Ujjayini (present-day Ujjain).

Meanwhile, the principal westward land route ran along the Yamuna from Kaushambi to Mathura, and then via Indraprastha, Sakala (modern Sialkot), Takshashila and the Kabul valley to Central Asia. The southward route passed from Ujjayini to Pratishthana in the Deccan (modern Paithan in Maharasthra), and so across the Deccan plateau to the lower Krishna, and the great southern urban centres of Kanchi and Madurai. The river pilots of the Ganga, the Indus and the rivers of the Deccan braved such perils as pirates, sandbanks and submerged rocks to convey goods and passengers across the subcontinent. Their cargo included spices, sandalwood, gold and jewels from the south; silks and muslin from Varanasi and Bengal; musk, saffron and yak-tails from the Himalayan foothills. Iron came from Jharkhand’s mines; copper from the Deccan, Rajasthan and the western Himalayas. Salt was traded inland from the coast; sugar was produced in moister and warmer zones, and ferried to cooler and drier ones; rice was exported to the northwest.

Used as they were by merchants, scholars, artisans, monks, warriors and pilgrims, South Asia’s river routes ensured that the Subcontinent was shaped by journeying and migration, the constant exchange of goods across a network of inter-relationships. To this history, we owe the absent husbands and lovers, gone away on their travels, who feature in Indian poetry and song across the centuries, from the Prakrit Gaha-sattasai to the thumri and kajri. It is this history, also, that negates Mahatma Gandhi’s charming but unfounded notion of the unchanging, self-contained village republics of India, which he borrowed from the British administrator Sir Charles Metcalfe’s Minute of November 7th, 1830.

If river routes were catalysts in the world of material gain and prosperity, they also supported that inter-penetration of terrain, culture and belief systems, which we call a ‘sacred geography’. Many Indian rivers act as re-tellings of myths, their courses punctuated by sthala-puranas or place legends associated with shrines that suggest alternative versions of the events nested within the capacious Ramayana and Mahabharata narratives. Situated on the banks of rivers or the confluence of rivers, such shrines mark a tirtha, the bridge from iha to para, this world to the other, from samsara to moksha, the world of appearances to a release from the cycle of rebirth. In this spirit, the Jaina spiritual liberators are revered as tirthankaras, bridge- builders who carry us across the river of life. And the Buddha, too, presents himself as a ferryman who helps the self to make the passage to the further shore of enlightenment.

The river, and the land between rivers, has been pivotal to political life as well. The agrarian histories of the Ganga- Yamuna doab in the north and the Krishna-Tungabhadra doab in the south chronicle the waxing and waning of imperial destinies. A recurrent narrative in Indic mythology is that of the war over water. The Rig Vedic episode of the Sky-God Indra’s killing of the cloud-dragon Vritra has been interpreted as the destruction of an Indus barrage and the release of its dammed waters. Again, in the Rig Veda, we read of the victory of Sudas, chief of the Bharatas, over a confederacy that attempts to divert the course of the Parushni, identified as a stretch of the modern Ravi, away from the Bharata territory. Our modern polity inherits, and exacerbates, a legacy of persistent conflict over rivers. Even 4,000 years ago, those committed to preserving local habitats shaped by long intimacy with riverine environments were struggling against those intent on destroying them in the name of large-scale economic transition.