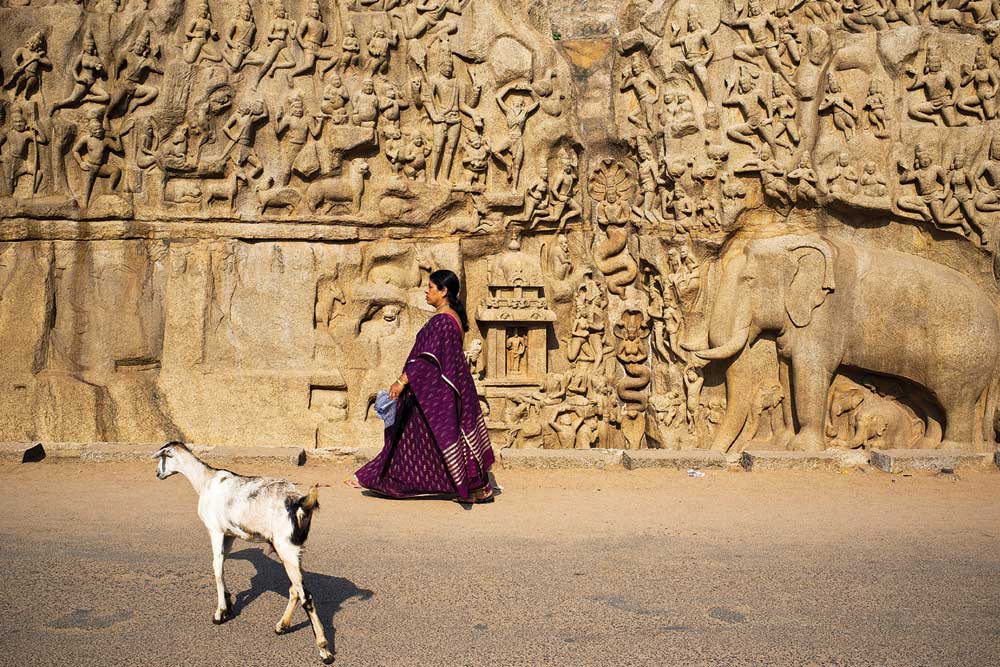 THE MONUMENTS THAT we first encountered in black-and-white photographs, listed as plates with Roman numerals in books taken down from library shelves, retain an aura of splendid isolation. They remain protected by eternity and unbridgeable distance, until you visit them. I remember the shock of waking up in a hotel room in Giza in 2008, with the pyramids outside my window. I remember, too, my first visit to Mahabalipuram in 2004, and the shock of approaching its leitmotif, the monumental relief sculpture showing Ganga’s descent from heaven, through a milling crowd of guides and tourists, peddlers and mendicants. For the first few minutes of the encounter, the 7th century Pallava masterpiece felt like a movie set, its magnificence throttled by the monster of consumerism that had blocked every approach to the horizon with stalls for trinkets and turned every vista into a backdrop for a photograph.

And then the enchantment of the sculptured narrative took over. The relief brings its own crowd to the game, being sumptuously detailed with a celestial host of nagas, kinnaras, gandharvas and gañas. It is famously readable as an elaborate visual pun, a dual allegory. In one reading, it depicts the royal sage Bhagiratha praying for the Ganga to descend to earth and wash away the sins of his ancestors, and of all humankind. In an alternative reading, it shows the Pandava hero Arjuna performing an act of penance. The Ganga narrative could well symbolise the achievements of the Pallava dynasty in hydraulic engineering, its large-scale irrigation and rainwater-harvesting projects. The Arjuna narrative could refer to the martial accomplishments of the Pallava ruler Narasimhavarman, who ruled from 630 CE to 668 CE. To arrive in this ocean-port, which had once been the second capital of the Pallava dynasty that ruled from Kanchipuram, is to enter a labyrinth of conundrums left behind for us to decode, fictions for us to savour.

Before we knew it, a guide had stepped forward from the chorus of importunate hands, each holding out postcards rehearsing the site’s glories in somewhat more magenta and cyan tones than nature had provided, and attached himself to us. “I show you Mahabalipuram, city of great Bali, also Mamallapuram,” he intoned. Like all good tourists, we began to tell him that we were not tourists, before giving in. We followed the trail of his stories, as it wound around hillocks and dipped behind boulders, to reveal exquisite shrines dedicated to Mahavishnu and Maheshvara, jewels coaxed from granite by the Pallava sculptors.

Mahabalipuram, on that particular Sunday in March, had been overrun by several hundred villagers, who had pitched their temporary settlements among the protected monuments. Women were cooking saambar in aluminium vessels, men had gathered in knots of conversation. They were worshippers, our guide explained, who had just participated in the Mahamaham festival, celebrated every 12 years at the Sthala-shayana temple across the road, built by a ruler of Vijayanagara in the 14th century. Passing among gold-bordered purple, mulberry and parrot-green saris, hung out to dry, we picked our way through time’s workshop, stepping over piles of bags, past dried thorn- bush and children sleeping on rock-cut steps.

MATERIAL PASSES ABRUPTLY into form in Mahabalipuram. An archway leaps out of the rock. The cave-temple’s logic demands a visual insistence on the entrance, not an extensive dressing or adornment of the surrounding rock surface. The gaze, drifting across a hillock’s pitted buff skin, is arrested by a colonnade. We are invited into a sanctuary hollowed from the granite. Stepping across a small moat into the varaha-mandapa, we find ourselves flanked by Vishnu playing a double role. To our left, he appears in the boar avatar, rescuing the earth; and, to our right, as Trivikrama, conquering the universe in three gigantic strides. The cave is also a shrine to Gajalakshmi, directrix of prosperity, and Durga, goddess of victory, commemorating Narasimhavarman’s triumph over the rival Chalukya dynasty. Narasimhavarman was called ‘Mamalla’, the wrestler, to honour his passion for that sport. He dispatched naval expeditions to Sri Lanka and presided over the military and mercantile expansion of the Pallava empire. His presence is everywhere, also, in the form of the lion or man-lion, a recurrent visual code in Mahabalipuram’s iconographic programme.

Mahabalipuram’s most intriguing fictions are the so-called Pandava rathas, which are far from chariot-like and have no connection with the Pandava princess. These monoliths suggest, instead, the results of an architecture competition: five drafts for temples, each rendered in a different style, ranging from the thatch-roof to the apsidal type, some square in plan, others rectangular, briskly hewn from a sequence of rocks and left incomplete. This stone city-within-a-city strongly suggests the workshop, an experimental space between quarry and architecture, strewn with bits of broken statuary, residues of pediments, column bases and keystones.

In one of these temples, we come face to face with Narasimhavarman. His high cylindrical crown, triple-wound knotted girdle and long, thin nose lend colour to the suggestion that the Pallavas may have been of Iranian origin. In Mahabalipuram’s punning sculpture, the sovereign is depicted both as king and god, pointing to an Iranian conception of kingship. Similarly, the motifs of the sun and moon as guardian- witnesses of regal and divine splendour, repeated in Mahabalipuram, comprise an Iranian symbolism brought into India by the Kushans and Sakas. And the Pallava man-lion is infused with the spirit of the Achaemenian gryphon.

In accounts of Indian art, the refinement of Pallava sculpture tends, unfairly, to be overshadowed by the stylised elegance of Chola art. In Mahabalipuram, we watch as tourists, unaware that they stand among the earliest stone temples in southern India, jostle for the mandatory group photograph. Or stroll, uncaring, past the interplay of stylised transcendental icon and tender realistic image, as in the narrative panel showing Krishna’s life and miracles, his leela, in the Govardhana- dhari cave. There, the eye transits from a cosmic Krishna, holding the mountain umbrella-wide above the villagers of Vrindavana, to the detail of a cow’s tongue, as she licks her calf while being milked.

Perhaps the most beautiful of Mahabalipuram’s treasures is the Mahishasura-mardini shrine. Its relief panels counterpoint two divinities. On the one hand, a resplendent Devi mounted on a Pallava lion that looks slyly at us, vanquishes Mahisha, presented as a buffalo-headed minotaur bearing a mace, heroic even in certain defeat. On the other hand, an elegant Mahavishnu as Anantashayana Sheshashayi, reclines on the cosmic serpent that is both the coiling logic of time and the ceaseless extension of eternity. In the centre is the sanctum of Shiva as Somaskanda, a favourite Pallava compositional choice, showing Shiva with Parvati and their sons Kartikeya and Ganesha.

Walking towards the shore, we try to imagine how this eastern harbour must have looked 1,400 years ago, as cargoes of silver, spices, fragrant wood, Roman wine, coral, turquoise and ivory circulated through it, connecting it both to Southeast Asia and to the Roman Orient. The Shore Temple, picturesquely but erroneously described as a ‘pagoda’, awaits us. Dedicated by a later Pallava ruler, the Sanskrit poet and dramatist Rajasimha who ruled from 700 CE to 729 CE, it captivates us with the serene presences that emerge from their penumbral sancta: broad-shouldered Shiva and meditative Vishnu.

The context of conflict between the Pallavas and the Chalukyas, from which the Mahabalipuram complex emerged, has long vanished from view. What remains as a legacy is the principle of the reconciliation of opposites. At every turn, the iconographic programme of Mahabalipuram emphasises the twinning of the dissimilar. We find it in the coming together of tandava and lasya, agitation and repose, incarnated respectively in the violent Trivikrama and the tranquil Varaha. We find it in the mutual mirroring, beyond sectarian mandates, of Maheshvara and Mahavishnu. The sculptural fictions of Mahabalipuram offer us dreams and hopes of a life beyond toxic polarisation. 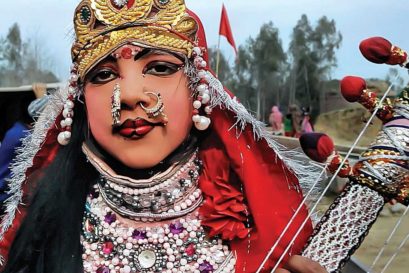