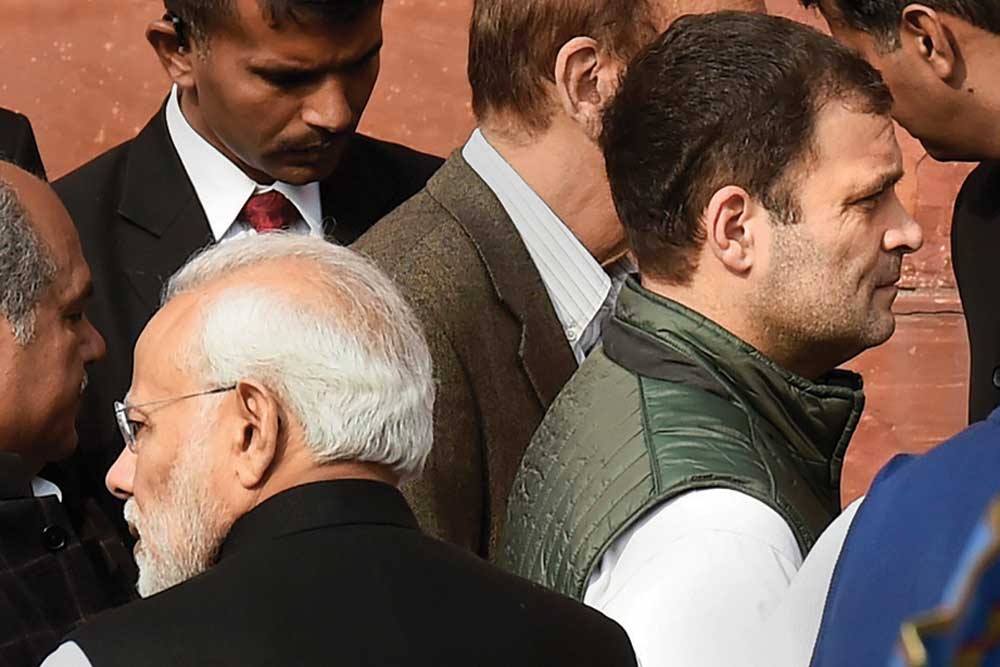 THERE COMES A time when an election defies both psephology and media psychology. When the mathematics of caste and the behavioural science of demography are made redundant by the kinetic force of an idea, authentic and urgent. When a cliché as familiar as ‘change’ is redeemed by a voice that comes from beyond the swamps of politics-as-usual. When biography is manifesto.

And there are times when the slow-burning theme of a comeback makes an election a vindication. When a political tradition, stagnant and abandoned by ideas, revives and reveals the face of tomorrow. When the persistence of the challenger—privileged, protected, uncensored, and burdened by ancestry—pays off. When biography is responsibility.

We were there last Tuesday.

The Modi of 2014 is still India’s most popular politician. In power for more than four years, he today propels the great Indian impatience. In the summer of 2014, it was more than a regime change. It was a culture shift, and India’s endorsement of an argument that challenged the certainties of the Actually Existing Secular State (as against the Ideal Secular State for which we don’t need an enforcer). Modi was the Our Man of Deliverance, and the flamboyance that marked his stump performance, the drama of being himself, was expected to be carried forth in his performance as Prime Minister. He was not supposed to be just another ruler, preparing for another term. The Right turn of 2014 was meant to be the beginning of the second phase in nation building. The Right should not lose the economic argument; and it should not leave the cultural argument to the mad fringe either. Is that happening?

He is still the Deliverer, the only one who drives mass expectations.

Rahul, too, is the Deliverer, the only one who drives Congress expectations. Caught between ancestry and ambition, he is constantly reminded of the future by his own surname. Power may be a family tradition of the Gandhis, but Rahul is a leader of aloofness. He is not the reluctant princeling. What is on display is cultivated patience. Some of his speeches that confounded India, with metaphors as buzzy as a ‘beehive’, were meditations on power. He was not passionate about it as a destination; it seemed he was intrigued by its possibilities— and its pitfalls. The political philosopher Mark Lilla, while arguing how liberalism has become an evangelical project, writes: ‘Evangelism is about speaking truth to power. Politics is about seeking power to defend truth.’ Rahul enjoyed speaking what he thought was truth to power. In the arena, he played the truth narrator with aggression and compassion. He questioned the integrity of those who ridiculed and dismissed him. There was no structured Congress message in these elections; there was only Rahul’s interpretation of the truth. On the stump, he was the insider outsider, the paradoxical Gandhi who would weep for the wretched, rage against the ruling elite, and name the thieves of the nation. He did not deviate from the text even as his party watched with a mix of apprehension and anticipation. The most privileged played the commoner victim; he became the rhetorical friend of the original chaiwaallas. He brought a natural ease to the role reversal. It worked.

Set apart by age, genealogy and sociology, Modi and Rahul are instinctive politicians. Modi is one of the world’s most effective campaigners—and the original outsider who came to power in spite of the party. Rahul is fighting for the preservation of one of the world’s last remaining political dynasties. Modi four years ago promised to free India from what Rahul today fights to restore. Both the attacker and the defender follow their own scripts, unconstrained by the party. This individual sovereignty adds a sense of freshness and modesty to one; it gives an aura of the ascetic to the other. Rahul is a Gandhi who is still dependent on more than his family legacy. He needs allies. Congress today in most parts of India is more a mindset than a machine. Force Modi soars over the party. He is perhaps the only strongman in power whose democratic legitimacy is not doctored.

He has earned a challenger.

This denies General Election 2019 the weary refrain of ‘Modi versus the rest’. Now ‘the rest’ has a face, a voice, and an attitude. What it needs is an idea more compelling than a bogeyman.