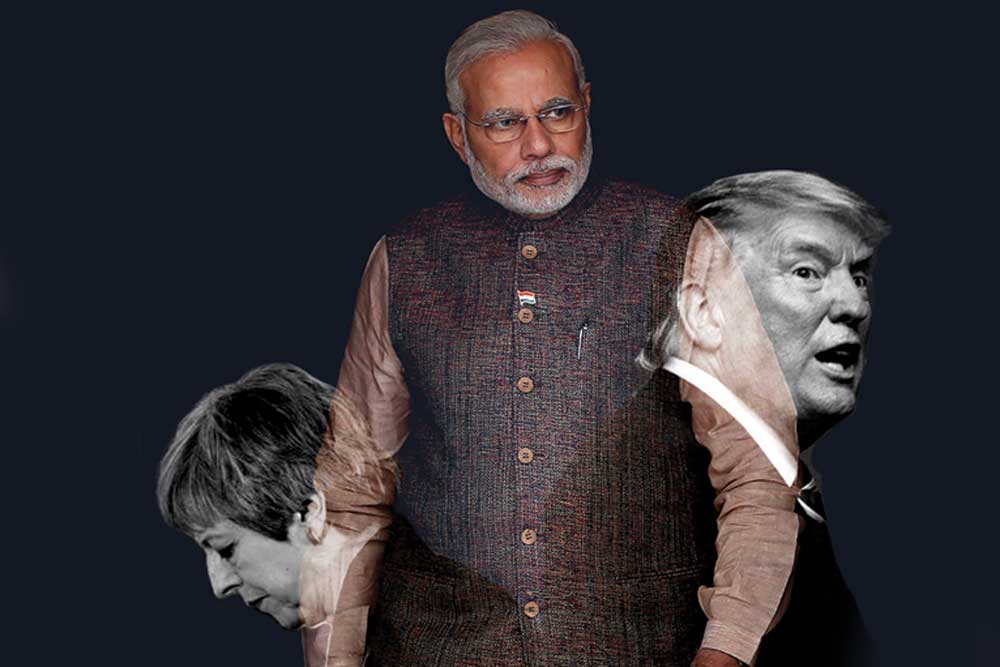 
THE ASCENT OF the Right in global politics is not matched by a leadership worthy of popular sentiment. Two examples will suffice. In Conservative Britain, Brexit was once politics’ neologism for freedom and national honour. It was a vote against supranational bureaucracy. Three years after the referendum, Brexit for the Brits who wanted Britain to leave the EU is all about the absence of leadership, or about the profusion of in-house cannibalism. A prime minister in melodramatic isolation offers to resign after a prolonged farce of deal-making with her tormentors in Brussels; a parliament continues to challenge the popular vote; shape-shifting leaders discredit each other in the war for succession; and in the middle of all this, a Soviet-vintage Labour Party looks electable. It is not an ideological crisis in conservatism; it’s a man-made catastrophe. It’s about a leadership that let people down.

The other example, across the Atlantic, is not about a civil war in the house; it is about a leader, still endorsed by his core constituency, who has declared war on all institutions, including the one he embodies. It is the vulgarity of power that diminishes the presidency of Donald Trump. He has never been a natural Republican, let alone a Conservative. He entered the arena as a usurper to the Establishment, and tapped into the social disenchantment that simmered beneath the American Dream. In power, he has become a reckless anti- president. He is liberal media’s most despicable president, disowned even by the refined Right. The crisis in the American Right, too, is man-made; the man is a permanent offence.

Elsewhere, there are still examples of the Right in power as exhibitionist paranoia, a re-enactment of the me-alone politics in a democracy. And it’s in this context that the rise of Narendra Modi marks a cultural shift in the Right’s management of power. For a moment we need to ignore the nothing-at-stake liberals’ dismissal of the entire vote as the incendiary expression of a crude electorate. We need to ignore an alarmist section of the international media calling the BJP a Hindu National Party, as if it is a religious variation of the National Socialist Indian Workers’ Party. And we need to ignore the attempt to turn a remarkable victory into populist voodoo.

What Narendra Modi has achieved is something both Brexit and Trumpism have failed to realise: a movement needs a man worthy of its message. When Modi vowed to bring in a Congress- free India during his first campaign for Delhi, he was more than calling for the defeat of the then ruling party. He was putting himself in the vanguard of a cultural uprising. The Congress in his political vocabulary stood for a calcified value system that repudiated the intrinsic intimacies of what constituted Indianness. You could be Hindu in your politics without being a zealot of religious unipolarity, and you could be a nationalist without being an apostle of bloodline purity. A sense of rootedness, or the easy comfort of being a nativist, does not necessarily mean a retreat from the civilities of a plural society. Modi in Power Part 1 was not defined by cow vigilantism or Hindu hate crimes; such transgressions only further validated the trend of the mad fringe feeling empowered in countries shaken by a sudden ideological rush.

In many ways, in spite of the enormity of the mandate in 2014, he was a cautious Prime Minister. I wish he was a little more spontaneous in his economic and political responses at times. When the base wanted him to play the action hero, he chose the slow progression of the epic hero, though there were the monotony-breaking drama of demonetisation and surgical strikes. The style of Modi in power was not the flamboyance of a populist in a stage-managed democracy. His style was characterised by the patience and persistence of a man who was driven by a frightening sense of self-awareness. Responsibilities of power did not tame the passion of power; rather, they strengthened his struggle for power, the only catalyst for change. Oh the drama—it was provided by the mad mahants and other sundry sevaks of the Hindu cause, much to the delight of those who were looking for the polarising kitsch of Hindutva. The victory of Modi in 2019 is not indebted to the cultural fringe of the Right. It is indebted to a cultural shift that goes far beyond the vulgarity of Hindu vigilantism.

Modi in Power Part II, going by his victory speeches and the behavioural pattern of his first term, intends to be an alchemist rather than an exclusive ruler of the believers, unlike the populists in power to whom he continues to be unfairly compared. What the big churn in a nation unbound requires is not the dramaturgy of an exhibitionist but the patience of an alchemist. Modi seems to know this more than most of the believers who swear by him.