‘To Somehow Shut Me Up’ 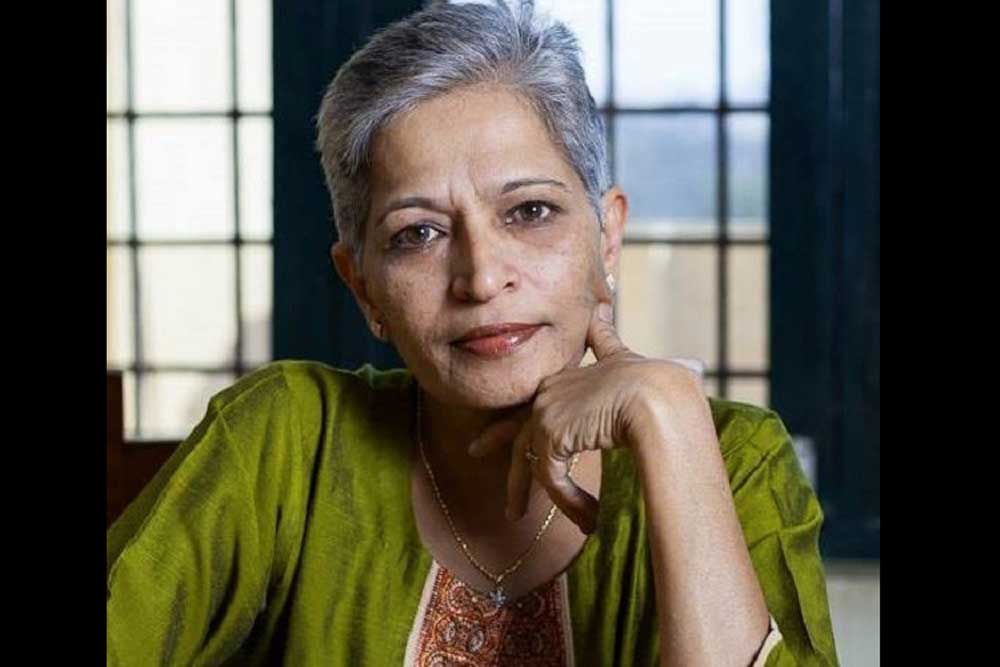 Gauri Lankesh tirelessly reached out to a wide variety of people. She reached out to the Maoists who had taken to the path of violence in fighting injustices, and convinced many of them to lay down arms and invest their faith in mainstream politics. Gauri worked relentlessly to expose how the Right is cultivating and using a culture of violence and intolerance to capture political power, and yet was open to a dialogue with any rightist.

Gauri never fence sat an issue. Opinionated and articulate, she dedicated herself to securing multiple freedoms and an India that would not be constrained by a climate of fear and hatred. She wrote frequently, spoke in various forums of her concerns, organised workshops on religious harmony and progressive politics, and travelled extensively to help build bridges over misunderstandings, to close gaps in our humanism.

At 1.40 am on her last day alive, Gauri posted a standup comedian’s video on Modi, and quipped: ‘seriously, i think these stand up comics are successfully doing more than most of us to destroy the Modi Myth. More strength and support to them. Keep is going folks!! we are all with you. together we shall reclaim our secular India’. She then posted a video on educating Indian parents on gay rights, shared Shashi Tharoor’s video post of Catholic nuns dancing on Onam in Kerala, urged us to catch Kangana Ranaut’s interview with Barkha Dutt with a ‘please watch. Love Kangana’, and then shared a Vinod Dua speech on the importance of a discreet distance from politicians for journalists. Finally, at about 3.23 am, she must have decided to get some sleep.

In many ways, these posts are indicative of Gauri Lankesh’s politics and her persona. She resolutely opposed the divisive politics of the Right, but did not make it personal against Modi. She was a liberal shaped by the experience of growing up and working in the conservative neighbourhoods of south Bangalore. She was an atheist who wanted anyone to practise any religion they so wished. Journalism to her was a mission, not a job.

I ran into Madhu Bhushan and Kalpana Chakravarthy at Gauri’s funeral. They were speechless. The three old friends had met at Gauri’s office to “catch up” after a very long time and spoke about “everything and nothing”, said Madhu. “It was so much fun,” cried Kalpana, unable to accept what had hit us. Wrapping up what had obviously been a long day, Gauri had gone home after that to catch up on sleep perhaps, never to wake up.

Hundreds turned out to pay Gauri their respects on a day the rain gods had decided to be super-active. Thousands across India stepped out in protest. There is anger that Gauri has been gunned down so brutally, anger that she is gone, and anger that she was silenced much before her time because of who she was. Anger that in a land where politics was about celebrating diversity, that space is being grabbed by the lumpen whose methods are to spread hatred, employ violence and snuff out alternate views.

In the process, a climate of fear is being normalised, and the crushing of dissenters and dissent itself has become commonplace. This is all too evident in the vicious celebration over Gauri’s killing on social media and in the horrendous language aimed at her politics, her personality, and even her very body as a woman. Gauri knew exactly the risks involved in doing what she did, as she said in a 2016 interview with Newslaundry.com: “In Karnataka today, we are living in such times that the Hindutva brigade welcomes the killings [as in the case of Dr MM Kalburgi] and celebrate the deaths [as in the case of Dr UR Ananathamurthy] of those who oppose their ideology…. I was referring to such people because, let me assure you, they are keen to somehow shut me up too. A jail stint for me would have warmed the cockles of their hearts!”

Somehow shut her up. Investigating teams will follow, and one hopes the probe does not go the way those of the killings of Kalburgi, Pansare and Dabholkar have gone. Indrajit Lankesh, Gauri’s brother who is with the BJP now, and who has had a troubled relationship with his sister over his politics, expressed the hope on TV that the family will get the peace they deserve from knowing who killed her.

As I see it, this only resolves a part of the problem. The bigger issue before us, as Gauri so often worried, is that the larger population is being bullied into accepting a culture of violence and intolerance of dissent as being normative to our body politic, dominated as it is now by the politics of conformism and majoritarianism. It is this situation that Gauri would want us to confront and overcome, and do it fearlessly. Yes, they have shut Gauri up. But her voice can now spread through millions of us. For, after all, all of us are Gauri.