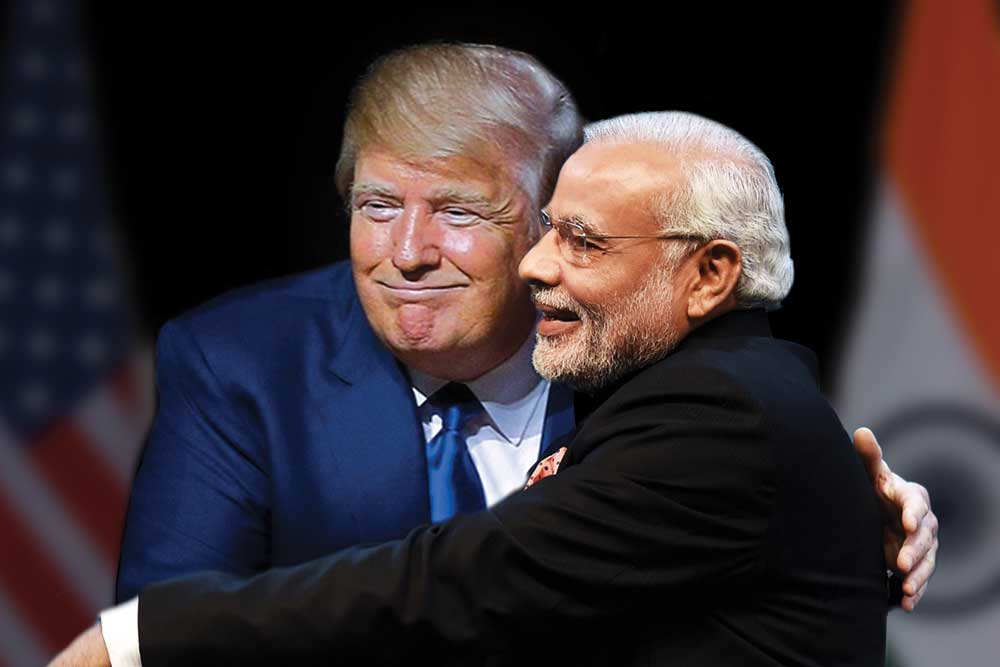 The omnibus US sanctions policy under the Countering America’s Adversaries Through Sanctions Act (CAATSA) targets India on two fronts. Regarding Iranian oil, the BJP Government of Narendra Modi has less than a 138-day reprieve. India will have to show substantial progress during this period in ‘zeroing’ out its energy supplies from Iran, or face the music. On the other front, India is sought to be punished for continuing to buy military hardware from Russia. The Donald Trump Administration has justified sanctions ostensibly hurting Iran and Russia—with whom India has had historically strong ties—in terms of curbing their supposedly ‘malign’ activities.

Because being in the good books of America at any cost, including self-respect, national interest and strategic common sense, is apparently the Modi regime’s top priority, India finds itself in the familiar role of a supplicant begging for exceptional treatment. National Security Adviser Ajit Doval’s numerous interactions with the poobahs in Washington failed to budge the US from placing India squarely within the crosshairs of its sanctions policy meant to coerce friendly states into doing its bidding. Coercion being President Trump’s preferred means of dealing with allies and ‘strategic partners’, with consultation reserved for its foes—Russia, China and North Korea.

But the Trump Administration’s waiving sanctions on India despite its purchase of the Russian S-400 air defence system should have alerted Prime Minister Modi to the geostrategic factors driving its India policy and how these constitute the leverage Delhi could have used to shape a more assertive response to US sanctions. The fact is in the entire Asian littoral no country, other than India, has the resources, territorial expanse and pivotal location for staging and sustaining massive military operations in the Indo-Pacific region. Without India, US military forces would be restricted, as they are now, to concentrated deployment at the two ends: US Seventh Fleet out of Yokosuka, Japan, and its Fifth Fleet in Bahrain. In this context, the question the Prime Minister should have asked himself is not whether India can manage without an indifferent America, but whether the US can do without a friendly India.

Except by appearing too eager, too ready to please, Modi showed obsequiousness, a quality Trump disdains, respecting willfulness and strength in leaders and nations. It led Washington to assume, correctly as it turned out, that the BJP Government, unmotivated by national interest, can be fobbed off with small favours, such as a conditional waiver of CAATSA sanctions on Iran oil and the purchase of the Russian S-400 system. And that the Modi dispensation will happily be a party to India’s strategic reduction as camp follower.

In the event, rather than putting in place an alternative sovereign banking channel to facilitate India-Iran trade, such as the one contemplated with Russia, and a ‘blocking statute’ providing legal cover for Indian companies doing business with Iran—the sort of move the European Union has made in response to US’s Iran sanctions, and otherwise ruthlessly using geopolitical logic to leverage a hands-off attitude to India’s Iran and Russia policies from Washington, Modi caved in.

India’s strategic autonomy and policy freedom as a result are being compromised, the decimation of this country’s longstanding Iran policy being an egregious example. Modi is siding with the US in strangulating Iran’s oil and gas-based economy. The US aims to slash Iranian oil production to some 300,000 barrels per day—the bare minimum necessary for survival—from a high of 3.9 million barrels in 2004. Delhi has done its bit by cutting its Iranian oil imports by a third with more to follow, even expensively retrofitting Indian refineries that previously processed Iranian crude with the wherewithal to process Saudi oil. The consequence of India’s complicity in furthering the American design means that Tehran will close in with China as saviour and degrade its ties with India. Instead of India cementing its vantage point in Chabahar, consolidating its presence in the Gulf, and radiating its influence northwards to Afghanistan and Central Asia, it will be Beijing in the driver’s seat. Worse, the possibility of pincering the Chinese and Pakistan navies ex-Gwadar and ex-Djibouti on the Horn of Africa (where China has established a military base) with Indian naval presence in Iran and Seychelles, will be nullified. Domestically, it will erode BJP’s support among the Indian Shia community.

Doval recently referred to India under Modi as a ‘decisive’ power. India is decisive alright—decisively submissive to the US (and China). This is a bad policy from a supposedly strong ‘nationalist’ leader and government.