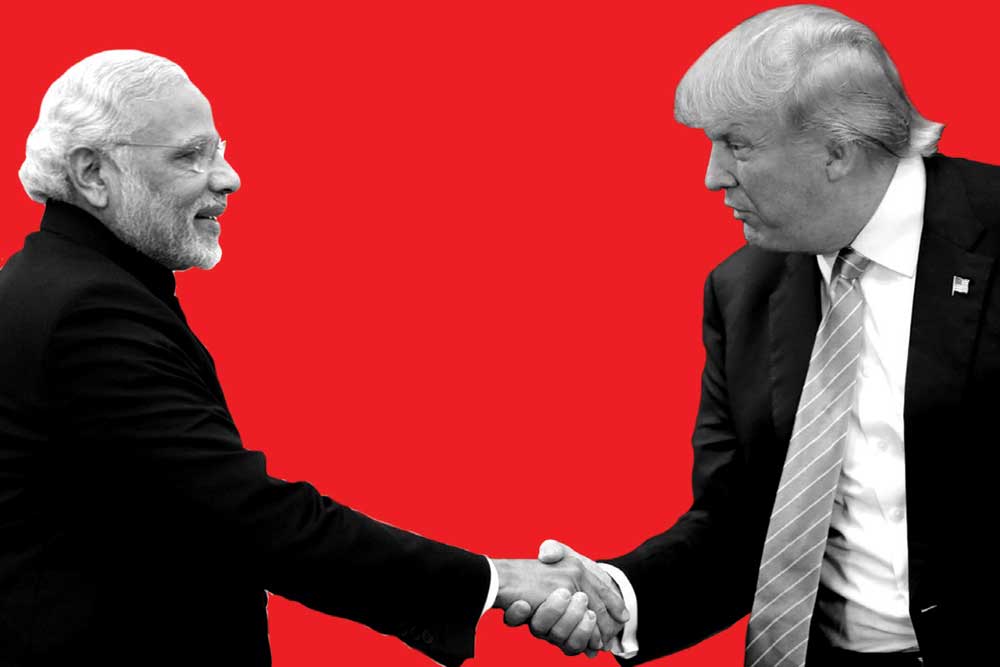 PRIME MINISTER NARENDRA Modi should have pondered the perils of visiting Washington this early in Donald J Trump’s presidency. It will do him and the country no good, especially if Trump chooses to turn it into a staged affair of yet another third-world leader paying him obeisance. At a time when the US president is distracted by numerous investigations of Russia’s role in tilting the 2016 US presidential election his way, Modi may find the unpredictable Trump in a funk, or in a flinty mood.

Trump, unlike Barack Obama, is not a liberal internationalist. As an impulsive isolationist with a sharply constricted view of America’s role in the world but gifted with a keen eye for promoting his profitable family businesses worldwide, Modi may get the US president’s attention if he talks of Trump Towers mushrooming all over the Indian urban landscape. No, really! Even as he is supposedly running the US government, the president, on the side, has just firmed up plans for a chain of more affordable Trump hotels across the United States. Trump may be vocabulary- challenged but is far from dimwitted. He is pursuing his three- point agenda of more jobs for Americans, more trade for America, and of getting freeloaders—assorted NATO and other allies and strategic and trade partners—to pay up for the security afforded them by far-flung US military forces. It follows that Trump believes in ‘free trade’ and ‘free trade agreements’, but only if these are partial to America.

This is a roundabout way of saying Trump doesn’t give a damn for India (or any other foreign country for that matter). If Modi thinks he can cash in once again on that clichéd rhetoric of shared liberal values, democratic freedoms, et cetera, he had better do a rethink, lest the airing of such sentiments lead Trump to first delay their meeting and then cut their eventual discussion short, as he did with Australian Prime Minister Malcolm Turnbull in early May when the latter brought up the subject of refugee intake. Some of Trump’s best friends are dictators and the regimes he is most comfortable dealing with are autocratic. Ask Chinese President Xi Jinping. Or, better still, Russian President Vladimir Putin. India and Modi lose out on both these counts—unless, who knows, Trump takes a liking to the strongman in Modi.

To the extent India is on Trump’s mind at all, it is as a country that has ripped “billions and billions of dollars” off America, a claim he used to justify yanking the United States out of the Paris Climate Accord, and as one stealing ‘well paying’ jobs from hard- working Americans while dumping low-paid Indian techies in America via the H1-B visa channel. “I love the Hindu!” Trump had exclaimed to a bemused NRI crowd in New Jersey during his election campaign, but Modi will be shown none of it.

What Modi will confront is Trump’s ‘America First’ dogma in action. Translated into a one-way transactional tilt of foreign policy, it will mean Trump asking Modi what India will do for the United States. Such an ask of foreign leaders is, after all, at the centre of the US president’s ‘successful’ interactions with them. Trump’s meeting with King Salman of Saudi Arabia in the third week of May led to Riyadh promising buys of US military hardware to the tune of $110 billion. The success of the June 1st Washington visit by Vietnamese Prime Minister Nguyen Xuan Phuc that followed was, likewise, predicated on Phuc signing deals with American companies valued at $8 billion, including $5.3 billion worth of energy equipment from General Electric, and US- produced content in them supporting 23,000 jobs. Should Modi ignore this pattern, and reverse the ask and plead for lenient treatment of the Indian infotech and pharmaceutical sectors (already, H1-B visas to Indians are down by 37 per cent) and for free trade in services to counter the US demand for facilitation of foreign direct investment in India, he may well be told to do something about the 30,000 Indians illegally in the US and to buy more American.

Modi can, under the circumstances, adopt one of two approaches. He can be the usual foreign supplicant, eager to get into the White House’s good books by forking over tens of billions of dollars in contracts that do not serve the national interest but permit Trump to Twitter-boast about his ‘amazing’ skills as a ‘great deal maker’. Or, Modi can do what Chinese President Xi Jinping did to temper Trump’s eagerness to fix the bilateral trade keeling over to China’s side: meet him head on.

India lacks China’s economic heft, but Modi can leverage two robust factors: the US interest in accessing the vast Indian market, and in having India join the emerging security architecture to hamstring China in Asia, and, from an Indian point of view, to confine it to east of the Malacca Strait. These are formidable prizes to dangle before Trump. By way of whetting Trump’s interest, Modi could even throw him a bone. The public sector Gas Authority of India Ltd (GAIL) is considering importing large quantities of shale gas from the US to ensure a competitive price for the Liquified Natural Gas (making up 65 per cent of the country’s requirement) from Qatar. It is a deal Trump, as a booster of the hydrocarbon economy, will appreciate, considering he recently approved the construction of the north-south Keystone oil pipeline cutting through the American Midwest that was held up during the Obama Administration for environmental reasons.

What Modi must absolutely resist is the tendency of Indian prime ministers in meetings with US and West European leaders to supinely make concessions and hand over whatever is demanded of them without asking for equally large if not larger benefits for India in return. A succession of US presidents, starting with Ronald Reagan in the 1980s, had promised advanced military technology, but not one deal of any significance has actually fructified in the last 30 years, even as off-the-shelf sales of transport aircraft, heavy lift and attack helicopters, the M-777 howitzer, etcetera, have proliferated. Meanwhile, the Indian market has been opened to American companies and investors and—courtesy the nuclear deal signed by Manmohan Singh—India may end up rescuing the US nuclear industry. If Modi buys the Westinghouse AP1000 nuclear reactor that has safety problems and remains uncertified by the US Atomic Energy Commission, as Washington wants him to, then India may have hell to pay. The Toshiba-Westinghouse company producing it is bankrupt and may soon cease to exist, and there may be no way for India to enforce technology quality guarantees. If Modi is prevailed upon to buy this lemon of a reactor instead of investing in our own advanced pressurised heavy water reactors, he can be persuaded to buy anything.

But India’s rescue act is endemic to its dependency-promoting economic policy and diplomacy. By not trusting Indian talent and industry to design and develop in-date military hardware, Delhi has perpetuated reliance on imported arms and on licensed manufacture of foreign equipment by the public sector-dominated defence industry that is stagnating at the screwdriver technology level. But these procurement deals have proved a boon for foreign defence industries. Thus, instead of pushing into prominence the indigenous Tejas light combat aircraft at home and selling it to other developing countries as an affordable state-of-the-art alternative to immensely expensive fighter planes, Modi, almost on a whim, threw a lifebuoy to the financially-strapped French aviation major, Dassault, with an order for 36 Rafale combat aircraft. The small number of Rafales is not large enough to have military impact, but will divert enormous funds—as much as $25 billion—towards sustaining the French combat aviation sector while starving India’s own Tejas project of resources.

If Hollande had Rafale, Trump has the Lockheed Martin F-16 to peddle to India. Except, buying the latter makes even less economic and military sense, considering it is a bare-faced attempt by the US to palm off an obsolete fighter plane on the pretext of seeding a modern aircraft assembly line in India. It will be precisely the sort of unequal deal that ends up saddling our armed services with nearly useless weaponry.

When military procurement happens as per laid down processes and procedures, the Government has the option even at the final stage of price negotiations to junk the deal. When the Prime Minister himself commits to a government-to-government deal, the country has no escape route. That’s why despite the Rafale being a bad buy, the Government will go through with it at an unbearable cost. Hopefully, Modi will not buy the F-16 aircraft and the AP1000 nuclear reactor for a pat on the back and a handshake from Trump, because then India, its Air Force, nuclear industry and the Prime Minister’s reputation as a dealmaker will all take a hit.