The Indian street needs a new fighter, not from the closed books of religion. Nor from the ghost houses of ideologies 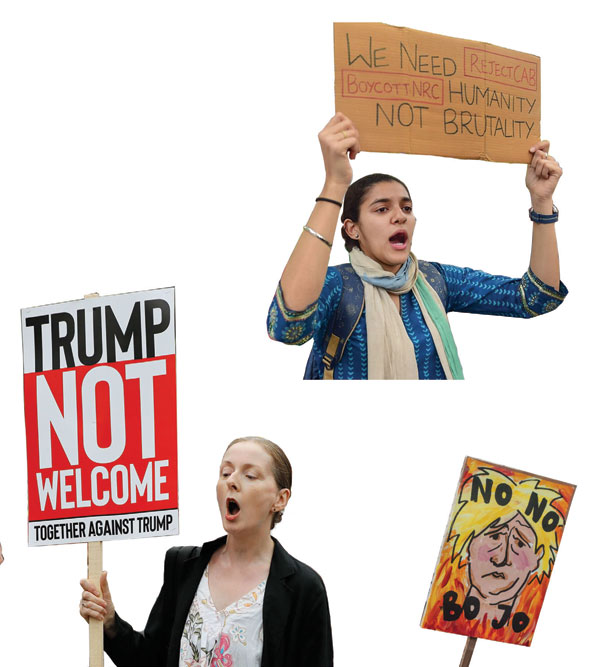 ANGER MANAGEMENT CANNOT be the preferred national experience on New Year’s Eve. As I write this, anger is what prompts some of our robust democracies to pleasant as well as unpleasant conclusions. The Impeached President. Brexit Rearmed. Citizen Outcast. The motifs are overwhelming, turning politics into a passion play, making civic morality a sham. The impeachment of Donald Trump, the process of constitutionally shaming a sitting president, may not give the Democrats what they want in 2020. The endorsement it gets does reflect the anger of the elite, liberal as well as conservative. Adversity, in Trump’s case, only leads to more bravado, more blatant manipulation of facts, and maybe, to the further consolidation of the base. It’s an irony only elections can explain: the elites and the base are united by anger. The former are angry because they are consistently rebuffed by presidential vulgarity; the latter is angry—and frustrated—because the elites never get it. The election in the UK has explained it with great clarity. The vote, as the elites wished, was a referendum on a referendum. What Britain said in 2016 was said louder in 2019. It was Parliament—yet another irony—that sabotaged the popular choice of 2016; it was Parliament versus the people. In the 2019 vote, the angry ‘natives’, or what David Goodhart calls the ‘somewhere people’, rejected the continental idealism of the elites—and the alarmism of Britain’s descent into post-Brexit Third Worldism. The backlash is relentless.

The anger on the Indian streets, too, is a backlash. It’s silly to dismiss the anger as a snowflake parade. It’s an exaggeration to see it as a liberation movement in a land without justice. For a generation, the street is a cause, though history has not provided them with a cause larger than a misread, and insufficiently explained, legal amendment on illegal immigration and citizenship. Being woke is to be with the outcast, and if there is not one, it’s the imperative of the conscience to create one. The besieged Muslim—the outcast in the unipolar Hindu Republic—is not just an image that breaks the secular heart. It’s an image, multiplied and magnified by liberal anger, that defines the dictatorship of the political Hindu. This image of cultural homelessness of the Indian Muslim has brought together the young idealist and the political masters of the ghettos. The angry street is a romance. It has always been. From Paris ’60s to Prague 1989, the romance was sustained by amateurs—writers and artists. In Delhi 2019, is the romance being subordinated to the politically mobilised resentment of the Muslim?


Before Boris Johnson, Modi consolidated his position as the singular force of a cultural shift. The triumph of the ‘servant’ is not necessarily the defeat of liberalism or elitism

The Muslim has been angry since 2014, when the Hindu nationalist won India. The Muslim’s sense of cultural homelessness began then. When the constitutionally legitimate but historically unjust separation of Kashmir from India was nullified, it was our moment of one-nation-one-people, or that’s what I thought. The end of Kashmiri exceptionalism was unbearable to those who made the struggle in Kashmir a part of the larger struggle of Islam. In varying degrees, the political class, its sense of entitlement strengthened by dynasty and demography, made use of that struggle. The abrogation of Article 370 angered them, turned them into unlikely martyrs. Then Ayodhya came along. More than twenty-five years ago, the restoration of a god vandalised and displaced, required the demolition of the mosque in Ayodhya, and when it was over, what lay shattered was the fundamental ethos of the republic. The Supreme Court judgment of 2019 that favoured Ram did not undo the shame of 1992; it added to the anger of the Muslim. Maybe, the state has been regularly telling the Muslim what it takes to be an Indian. And this is exactly what the so-called Muslim leadership that feasts on victimhood and the perceived cultural exclusion wants. The source of the anger is not the citizenship Act; it is just a convenient provocation. It’s the rise of Hindu nationalism—and the unsettling popularity of the man who can make it a bestseller on the stump—that propels the resentment. The Muslim revolt against the Hindu regime has been officially launched in 2019.

Should that be allowed to distract us from the fact that the political struggle of Islam is incompatible with the idea of freedom as most of us understand it? Will the freedom-fighting Indian Muslim march for the freedom of the Muslims who ask questions, all those heretics and blasphemers? Isn’t Islamism, the political variation of the faith, intrinsically immune to reform? We can only hope that the cautious optimism of observers like Shadi Hamid (of Islamic Exceptionalism) will be vindicated: “There was a time when Islamists saw society, rather than the state, as the engine of social transformation. The legacy of a failed Arab Spring and a new ‘caliphate’ called the Islamic State will likely be this: forcing them, and perhaps us as well, to reimagine the nature of political change.” Still, it’s most likely that you will be stigmatised as an Islamophobe (a term invented by a condescending class that overlooked dehumanising cruelties in the name of exceptionalism) if you dare to question the change Islamism is seeking. The Indian street needs a new fighter, not from the closed books of religion. Nor from the ghost houses of ideologies. The year 2019 did not give one.

In 2019, the ‘servant’ was the change. In this part of the world, it was the chowkidar. For the caricaturist, Boris Johnson was a dishevelled Tory toff, and a jester in the loose Churchillian coat. Humiliated by his party and Parliament, not to speak of the Tory grandees, he took the argument for Brexit—an argument for freedom—to the people, and won. He reached out to them as their ‘servant’, even as the Left played the master of their destiny. He won. Before him, Modi played the chowkidar and consolidated his position as the singular force of a cultural shift in post-Nehru India. The triumph of the ‘servant’ is not necessarily the defeat of liberalism or elitism. The ‘servant’ listened to the whispers of ordinary people as his caricaturists retreated into echo chambers. In 2019, the compassionate revolutionary replaced ideology with intimate ideas of change. The ‘servant’ was the freedom fighter.

Freedom is still the big idea of our times. We, in this special holiday issue of Open, courtesy Isaiah Berlin, play the fox to engage with the many variations of the idea. Berlin quotes the Greek poet Archilochus: “The fox knows many things, but the hedgehog knows one big thing.” He divides the great writers between monists (Dante and Dostoevsky) and pluralists (Shakespeare and Joyce), though the essay is about someone who is both: Tolstoy. Now you know why the issue you hold in your hands is a bouquet of many ideas, none ever boring.